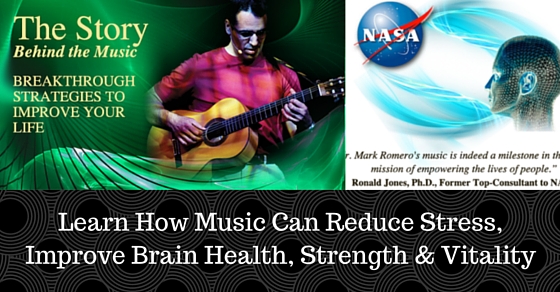 Sometimes life gives us a 180 degree shift in direction that we didn’t ask for. That was the case for Mark Romero. Years ago he had a successful corporate job and made great money, but he wasn’t happy, wasn’t fulfilled. His wife looked him in the eyes one day when he got home from work and said “I don’t care how successful you are, when I look in your eyes you’re dead inside.”

That hit him right in the chest, as you could imagine. As he pondered his wife’s words he realized that although he had fought it and put on a good face he was not happy and wasn’t living his purpose in life. The money no longer mattered. He quit his corporate job and began pursuing what his real passion was, music.

The goal was to be a sort of “Tony Robbins with a guitar” with a Latin sound. He played in a gig here and there and during one event where he was invited to play a former PHD named Dr. Ronald Jones who was a former consultant to NASA happend to be in the audience.

At the time Dr. Jones along with a team of quantum physicists were studying the effects of chemicals on our body, brain and health. Humans have introduced and dumped over 60,000 new chemicals into the environment. These chemicals have contaminated the air we breathe, the food we eat and the water we drink. His team was studying the effects on our body, brain, health and physiology, basically our entire energy field.

Dr. Jones and his team of scientists were able to demonstrate that these interruptions were actually the root cause to stress in our lives, not to mention disease, low energy, poor physical performance, compromised mental functions and lack of spiritual connection.

Through a series of muscle tests, applied kinesiology, range of motion and strength tests, Dr. Jones was able to demonstrate how things we use everyday from household cleaners to electrical equipment such as, cell phones and laptops actually compromised people’s strength and energy levels.

Dr. Jones had discovered a recording of Paramahansa Yogananda chanting that caused physiological changes in listeners. This inspired him to begin to look for music to harmonize people’s energy and shield them from the weakening effects of energy interrupters.

In the course of the demonstrations, Dr. Jones asked Mark Romero to come on stage and play my music. As soon as he began playing they repeated the multiple of tests and where previously people had gone weak when being exposed to interrupters, now they were remaining strong while he played my guitar.

Dr. Jones informed Mark Romero that when my music played in the environment there was an instant increase in strength, flexibility, endurance, coordination and balance in the physical body.

Secondly, through brain mapping (a technology that maps brainwave patterns) they saw a harmonization in brain waves, a state they had identified with athletes in peak performance. Thirdly, the brain and the body maintained this state when being exposed to energy interrupters.

Out of this discovery, listeners have been having tremendous benefits simply by playing the music in the environment. People suffering from Autism, Alzheimer’s and other serious conditions have experienced major benefits with the music. CEOs and top executives are swearing by the music as a tool to help them effectively deal with stress, remain grounded and open the door for more creativity.

Schoolteachers are playing the music for students and are convinced that the music is helping their studies and improving grades. Athletes are also noticing an improvement with their exercise programs and yoga routines. And most miraculously, listeners are breaking through subconscious blocks and barriers all by simply playing the music.

This music is helping people around the world find inner-peace, clarity and focus. By immersing yourself in the vibrant, rich rhythms of Mark’s music you can accomplish the same thing, simply by enjoying a unique blend of Jazz, Latin, Rock and Classical music that soothes the soul and enhances the spirit.

By listening to Mark’s music you’ll receive powerful, life-changing energy waves that will empower you to achieve newfound success in all areas of your life. This influential energy will reduce your stress and anxiety, heighten your creativity, as well as ignite your inspiration and motivation and protect you from EMFs.

I’m a big fan of Mark’s work, and his music. I had the pleasure of meeting him in person at the awake and empowered expo a few years back and spent some time with him earlier this year at another Awake & Empowered Expo event. I’ve seen him do the applied muscle & kinesiology tests firsthand on… guess who? me! and I felt a difference. I have done a lot of muscle testing before but I noticed a larger difference through Mark’s guitar music. He truly has a gift.

Mark’s work with energy and music has placed him on the stage with internationally respected leaders such as, Mark Victor Hansen, T Harv Eker, Dr. Bruce Lipton, and Marianne Williamson, and he is recognized as a leader in the field of optimizing personal energy.

Take a listen to the beautiful music below:

Do you feel a little more at ease? peaceful? brain harmony after hearing that sound? I know I do, each time. I listen to his music quite often actually and it has helped me focus, be more creative and feel an inner harmony the moment I turn it on and tune in.

I found this on Mark’s website and found it worth sharing:

“I was a little skeptical about Mark’s claim that his music actually made changes in brain wave patterns and strengthen people, until I experimented on my nephew who is Autistic. I played the music for him during a forty-five minute drive, and received amazing results. This child spends much of his time distracted and talking to himself, but while listening to Mark’s music, he was able to concentrate on our conversation and give me feedback to every question I asked him. He has never done this before with me! Needless to say, I highly recommend the music and the work Mark is doing.” Ken D. Foster CEO – Shared Vision Network

Mark has a free Vibrational success webinar coming up on the 19th of November, that I invite you to join and benefit from. In this webinar you’ll learn (and gain practice) in how to: