This is Why You Should Limit How Much Kombucha You Drink 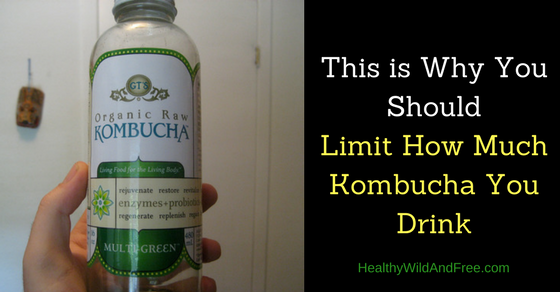 I’ve been drinking kombucha for years. It’s a delicious tasting healthy tea right? Full of probiotics? Well yes! But there is a slight downside, maybe even a few unfortunately.

Kombucha is brewed through fermentation. The process takes what’s known as a SCOBY (symbiotic culture of bacteria and yeast) and this scoby along with sugar and water is literally all that’s needed to make kombucha from scratch which you can learn how to do here. The creation (fermentation) of kombucha is quite simple. Water carries the scoby and the scoby (bacteria and yeast chunk) simply floats in the water. The scoby then eats the sugar and in the process ferments it creating a kombucha tea that is rich in probiotics that are beneficial for the gut.

I brewed my own kombucha for a while but started seeing some funky things in my brewing jar and after doing some research online I wasn’t quite sure if it was fermenting properly so I stopped. I didn’t want to brew a kombucha tea that was growing an unhealthy bacteria and then feed that to my gut thinking I was doing myself a healthy favor.

Getting kombucha brewed properly does take time and understanding and there are plenty of people who can explain in greater and better detail if your kombucha brewing is healthy or not.

Kombucha Releases A Neurotransmitter Known As “Histamine” in the Gut

Recently I was browsing the web and saw something about kombucha releasing histamine in the gut. If you aren’t familiar with what histamine is, histamine is a neurotransmitter that is found all throughout the human body including the gut. When histamine is released the objective is to notify the immune system of a potential invader. Histamine allows the immune system to react quickly as well as the body to produce an anti-inflammatory response for the body when needed. If the body produces too much histamine then allergic reactions such as swollen eyes, skin rashes, puffy eyes then this is typically prescribed an anti-histamine by the medical community.

The body needs and uses histamine, but only in a correct amount where it’s actually necessary. If the body produces too much histamine it can then cause an imbalance. Anti-histamines such as benadryl or allegra have side effects on the heart and brain and I do not recommend taking these drugs.

When modifying your health you should never take “blocker drugs” such as anti-histamines or acid blockers. These always have unintended side effects. There’s a reason your body produces too much histamine or acid and it’s your job to correct your diet in order to solve these issues holistically, not rely on a drug that will only hurt you more down the line. Back to the kombucha though!

Kombucha releases the neurotransmitter histamine in the gut. It does this by activating the bacteria that produce it.

Histamine is broken down by diamine oxidase (DAO) which is an enzyme in the digestive tract. If your body is deficient in this enzyme then it would be smart to either drink less kombucha or to increase your DAO intake.

Foods That Are Rich in Diamine Oxidase Include:

You can help the DAO enzyme work more effectively by making sure that your diet is rich in foods that contain vitamin C and vitamin B6. Research shows that these vitamins can reduce your histamine load by supporting DAO enzyme activity.

Remember that histamine is not bad but if your body is not breaking it down properly then there’s a good chance your histamine levels are higher than need be and accumulating in the body. Vegans and vegetarians do not eat meat, cheese or much protein in general so if you are a vegan or vegetarian this is something to keep in mind if you also drink kombucha.

How Can Histamine (Usually Helpful in The Body) Be Harmful?

However, if you have what is known as histamine intolerance then kombucha might be a bit of a problem. A histamine intolerance occurs when there is a deficiency in enzymes that break down histamine as well as an issue with the body in it’s ability to methylate properly. Methylation has to do with gene altering. If your body isn’t methylating properly and deficient in diamine oxidase then histamine will build up in the body. This will lead to symptoms such as headaches, fatigue, irregular bowel movements, itchiness and skin conditions such as rashes and cause you to feel generally miserable. This is simply a histamine imbalance within the body.

Histamine helps your immune system respond quickly as well as has anti-inflammatory effects, so it’s not a bad thing, it simply needs to be consumed/produced in moderation. I used to drink kombucha like it was water and I can honestly say that regardless of how healthy you eat there’s a good chance that your body cannot handle too much histamine simply because the necessary enzymes and vitamins are needed to break it down also. If you’re consuming too many histamine rich foods your body is then also exhausting these nutrients to take care of this issue.

High histamine drinks and foods such as kombucha, apple cider vinegar, saurkraut, kimchi, aged cheese and other fermented foods should be consumed in moderation. If you’ve ever taken an anti-histamine such as benadryl or allegra you are taking a shortcut to stop histamine production but not solving the core root issue. That issue is simply foods that produce more histamine in the body than your body can handle.

You’ll want to lower those histamine foods and increase your intake of foods rich in diamine oxidase (DAO) to break histamine down in the body. Once your levels are healthy again (you’ll feel it) you can reintroduce these foods and drinks slowly.

If you’d like to keep your gut microbiome healthy in the meantime or not rely so heavily on probiotic foods and drinks (which can become pricey) I recommend eating more prebiotic rich foods. Prebiotics are plant fibers that help in the production of good gut bacteria for your health. Foods such as artichoke, banana, chocolate, raw dandelion greens, raw garlic, raw leeks are some of the main and most popular prebiotic rich foods.

To answer the question “is kombucha healthy?” I would change it to “is kombucha healthy for you right now?” and if you eat very few diamine oxidase rich foods and drink a lot of kombucha then it’s probably not best for your overall health right now. Moving forward that can change, but get your histamine levels fixed first!