Why You Should Avoid Wearing A Bra As Often As Possible 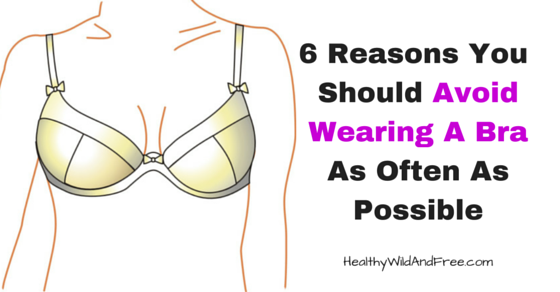 If you are a woman, you know the amazing feeling of taking your bra off after a long day of wear. The feeling of letting your upper body breathe, we get that “ahh” moment and as many would describe it– the feeling of being free! But have you ever stopped to think about why it feels so good? What are our bras doing to our bodies that makes us feel so good when they finally come off?

Bras can be highly constricting on your chest and diaphragm, which creates of variety of very real consequences on your health including your lymphatic system’s ability to rid toxins, your digestion, circulation, and even damage to ligaments. You want your body to feel free and the least constrictive as possible to support your overall health, so it makes sense to avoid wearing a bra as often as possible. Scared of sagging breasts, think your bra is actually beneficial to your back, or that your boobs may be too big to go bra-less? Scientist Jean-Denis Rouillon concluded from a 15 year study of women age 18-35 that wearing a bra from an early age did nothing to support the chest, reduce back pain, or prevent premature sagging. And as a woman who regularly goes without wearing a bra (and I am not a size A), there are ways to support our breasts without the need to wear this constricting garment. I have felt benefits first hand, so much that I can now feel the negative impacts on my body when I do wear a bra. Here are the benefits of avoiding a bra as often as possible, as well as tips to make the leap to braless- with confidence!

When your diaphragm is held too tightly from a bra, it cannot act as a pump to massage internal organs the way it needs to for optimal digestive functioning. The British School of Osteopathy has noted Irritable Bowel Syndrome and constipation as a result of fashion bras constricting the digestive process. By not wearing a bra, you allow the diaphragm to work without constriction, and your stomach can produce enzymes to properly digest food.

The constriction of the diaphragm means that breathing must instead come from the muscles of your upper chest, and you do not get the full range of breath.  When you avoid wearing bras, you are able to breathe easier and breath deeper, allowing more oxygen into your body which contributes to better overall well-being. Deeper breathing benefits every system in your body, as well as being associated with increased energy levels, decreased feelings of stress, muscle relaxation, and stabilization of blood pressure, just to name a few.

According to Dr. Claire Heigh quoted from BreastNotes.Com, “bras cause breasts to sag because chest muscles work less when breasts are supported and confined in a bra. Over time, these muscles and ligament can atrophy because of a lack of use… when the chest muscles and ligaments have to bear the weight of the breasts, muscle tone returns”. Findings from a study done by French Scientist Jean-Denis Rouillon seem to support this, as a 15 year study included women who did not wear bras had a 7 millimeter lift as measured from their nipples each year, in addition to firmer breasts. Your body knows what to do, it just needs time to do so without any outside assistance.

4. More Toxins Are Able to Be Released

Professor Neil Puller of Flinders Medical Centre Foundation conducts research on the connection between bras and lymphatic health, and reports that bras do compress and restrict the shallow lymphatic system and prevents drainage for some women. Bras restrict the lymphatic system from draining away from the breast, which means toxins can’t be released, nutrients can’t be transported, there is no protection against harmful invaders, and you are more susceptible to disease, lumps, cysts, and fibrous tissue. Researcher David Moth found that even wearing the lightest bras place pressure on the lymphatic system. Lymph drainage is dependent on movement, so not wearing a bra gives natural movement to breasts and massaging of the glands, allowing toxins to be carried away from the breasts throughout the day.

The idea behind this is that oxygen and nutrients are cut off due to the bra, and toxins cannot be eliminated. As found in the article, Health Impact of Wearing a Very Tight Bra, oncologist Dr. Shah states the following:

“Bras inhibit the way our bodies normally cleanse themselves and get rid of cancer cells and toxins like dioxin, benzene, and other carcinogenic chemicals that cling to the body’s fatty tissues like breast. In fact, if you find a lump in your breast, it may very well be filled with lymph fluid that was not able to move away from the breast tissue”.

While there is much controversy around the link between wearing bras and breast cancer, (thanks especially to Sydney Ross Singer and Soma Grismaijer and their 1995 book, Dressed to Kill: The Link Between Breast Cancer and Bras— as well as a Harvard Study concluding that “Premenopausal women who do not wear bras had half the risk of breast cancer compared with bra users…”)– there is no downside for being cautious. If you are at risk for Breast Cancer, especially consider avoiding wearing a bra.

A study published in The Journal of Biological and Medical Rhythm Research looked at the correlation between bra use and Melatonin and found that wearing a girdle or bra causes an increase in body temperature, lowering levels of Melatonin by 60 percent. What’s even more interesting is that, according to the University of Maryland Medical Center, as well as several other studies, low levels of Melatonin are reported in individuals that do have Breast Cancer. Avoiding wearing a bra can aid in natural production of Melatonin, which can slow cancer cell growth, as well as having anti-aging properties, promoting healthy sleep, and regulating female menstrual cycle.

-Consider alternatives to bras such as tank tops, camisoles, bralettes, front-clasping sticky bras, pasties, or adhesive tape. These are all supportive without negative effects from bra use.

-Do not sleep in a bra. Bras are constricting enough, and when you lay down in them, they further constrict your body, and for unnecessary periods of time. Your breasts and surrounding area need time to breathe, and not just for the time spent taking a shower.

-If your end goal is to go completely bra-less, avoid wearing a bra when you are alone. It will allow you to be more comfortable with walking around without a bra, and it will minimize strain from bra use.

-Avoid wearing a bra when you’re wearing thicker fabrics, when you won’t need to take off a jacket, or when you’re running errands, to ease your way into going out in public without a bra.

-If you are uncomfortable with not wearing a bra with looser shirts, layer yourself with a cardigan or vest, and/or learn to position your arms and body while talking to others to cover yourself.

While there are alternatives to wearing a bra, there may be times where you do choose to wear one, such as while exercising. If you do choose to wear a bra: ditch the underwire, wear it only in the time period that you have to, take it off as soon as you can, and massage your breast area shortly after. If you choose not wear a bra: be free and be proud! Know that you really are helping your body by letting loose, so be confident in your decision to go bra-less.. liberate yourself! You have total control of how you feel about your body (with or without a bra), but speaking from my own experience, not wearing a bra gives a sense of confidence, and boosts self esteem. I have made the lifestyle choice of regularly going bra-less for as long as I can remember– to running errands, to work, out with friends, and especially at home. Even if you don’t make that choice right away, know that small changes are better than no change. Not wearing a bra may take some time to get used to, but you will have a whole new relationship with your body, and you will be giving your body tremendous benefits!