What You Need To Know About Ear Infections and Autism 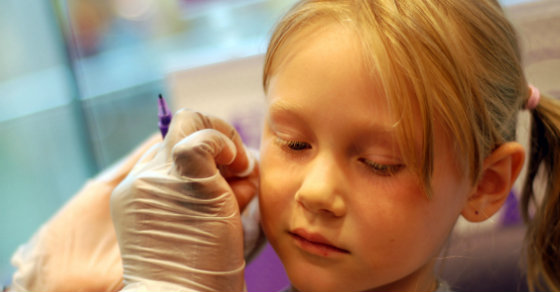 All of these are symptoms every baby goes through at least once.  Is it happening frequently?  Do you get all symptoms simultaneously?  If so, it may be a sign that your baby has GAPS, or gut and physiology syndrome.

GAPS is a primary cause of ADD, ADHD, Autism, dyslexia, depression, even schizophrenia.  It can cause otherwise sweet babies to be overemotional, angry, and sometimes intolerable.

ALL DISEASES BEGIN IN THE GUT.

Digestive problems usually start at weening.  That’s how it worked for our family.  Our sweet little boy went from sleeping all night like an angel to this screaming emotional roller coaster of a child who spent all night shrieking.  Everyone tried telling us it was growing pains, or just the terrible twos.  That’s just what kids do, you’ll get used to it.

The poor little man would tug his ears until they were bright red. His stomach was swollen like a ripe melon.  We were losing sleep, losing the joy of parenting, and losing our minds.  No Dr or antibiotic would fix it.  Nothing they suggested lasted.  We had him allergy tested, negative.  Even doing the full bore needle prick test.  Nothing!  Finally, God led us to someone who had been through the same thing with their daughter but had found the cure.  She introduced us to Dr Natasha Campbell-McBride MD’s book Gut and Psycology Syndrome.  Natural treatment for Autism, ADD, ADHD, Schizophrenia

What do digestive abnormalities have to do with hyperactivity, difficulty learning, mood and behavior problems or autism?  A LOT!  The child’s digestive system holds the key to that child’s mental development.

“The child’s digestive system holds the key to that child’s mental development.”

Rarely will you meet a child with autism or ADHD who isn’t also a “finicky eater” or have other digestive issues. Rather than cramming your child into each of these separate categories of diagnosis, and seeing specialists for each, Dr McBride proposes GAP Syndrome is the underlying cause.  Making the diagnosis of ADD, allergies etc. symptoms rather than medical conditions.

We do the same in almost all modern medicine.  We separate each part of the body into separate systems, digestive system, circulatory system etc.  Truth is our bodies and mind function together as a whole.  For people with GAPS the body becomes a toxic place.  This toxicity spreads effecting every system but does begin in the digestive system.  However the symptoms may first appear as rashes, or mood disorder.

In 1807 the father of modern psychiatry Phillip Penel after working with mental patients for many years concluded “The primary seat of insanity generally is in the region of the stomach and intestines”  Why then do modern psychiatrists ignore the gut as a cause of mental illness?  Perhaps it is a misaligned view of how our body works.

Consider the human body to be like a planet.  Inhabited by a vast network of micro creatures. The tiny organisms connect our skin, eyes, intestines, and brain chemistry.  Without them we could not survive.  The largest colony of the micro-creatures resides in your digestive system.  The average healthy adult carries 2kg of bacteria in their gut.  These aren’t a bunch of bacteria run amok.  If we sterilized our stomach and killed these bacteria, we would die.

Imagine Trump was president of your stomach and built a wall. The wall is made up of flora. Three different kinds of flora work together to turn food into the necessary byproducts while filtering out the bad stuff and imprisoning it inside the wall.  If you reduce the flora more bad stuff can sneak in and out of the wall, causing chaos in the whole system.

As an example, in autistic children gluten tends to be transferred into an opiate like substance that slows motor function and the brain.  Basically the body is turning food into drugs and keeping kids to stoned to function.

Keeping a healthy balance of bacteria in our gut is essential for health. After all isn’t that the purpose of eating?  We ingest food to be broke down and turned into usable materials.  If the filters and barriers in the gut are compromised it opens the body up to lots of bacteria. Especially in sensitive places like your Ear. Which is why we get symptom #1 ear infections.

Ear infections happen in the middle ear, a small enclosed space whose function is to pass the sound from eardrum to inner ear using three interconnected tiny bones.  All this is connected to the outside world through the eustachian tube. The eustachian tube is the most import an player when it comes to ear infections.

The eustachian tube stretches from your ear to behind your nose and nasal cavity.  It acts to regulate pressure int he ear with atmospheric pressure.  It is why your ears pop when you fly.  It is protected by lymphoid tissue which then enters the Tonsil tube.  These tubes and lymphs get swollen and blocked when invaded by bacteria.

Avoid these foods in order to get rid of ear infections:  Sugar, Dairy Milk, and processed carbohydrates.

Constipation is ALWAYS a sign of deficient gut flora in children and adults. Beneficial bacteria play a crucial role in proper stool formation and elimination.

Though it is kind of a taboo topic in the western world, the most effective and quick relief of constipation is an enema.  Directions for which were included in the Dead Sea Scrolls.  The benefits were also discussed by Arabian physician Ibn Sina Avicenna in the 11th century.  You can get an enema kit from your local health shop.

No-one, adult or child should remain in a state of constipation.  It is extremely harmful for the whole body.  It lays the groundwork for nasty disorders like bowel cancer.  It also produces copious amounts of toxins which poison the entire body.

Learn more about vaccines and their potential dangers by watching the Truth About Vaccines documentary series that will be available very soon. Click here to sign up to register for the event or click the banner below.