This Study Found How To Make Turmeric 2000% More Medicinal 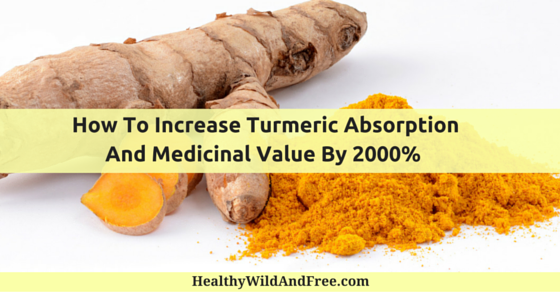 Turmeric is one of the most beneficial and medicinal spices on the planet. It’s used in primarily Indian cuisine but is also used in many other foods and cultures around the world. It is also used in China, other parts of Asia and Jamaica. It’s one of the staple ingredients in curry, which is delicious! But turmeric offers much more than just a delicious flavor. It is one of the best anti-inflammatory agents known to man.

Turmeric has many health benefits, such as:

A Whole Lot More: Turmeric is also beneficial for the aging process, skin health, diabetes, depression, arthritis & More! It probably has more medicinal properties than we know and have yet to discover, like many plants herbs and spices. With such a powerful medicinal compound as curcumin we can at least understand the benefits that we currently know and have research on and work it into our dietary routine in one way or another.

How To Make Turmeric (Curcumin) Up To 2000% More Medicinal:

What’s interesting is that curcumin in turmeric is beneficial for health and well-being but it can be up to 2,000% (yes, you read that right, two thousand percent) more effective by simply consuming black pepper with turmeric.  If you consume black pepper with turmeric there is research that shows that it can increase the bioavailability up to 2,000%. The study started with rats and found that absorption of curcumin improved 154% with piperine, the active compound in black pepper.

With humans though they found it gave even better results. The increase in bioavailability for humans to absorb curcumin raised 2000%.

What does this mean? It means that if you want to absorb and fully receive all of the benefits of turmeric’s active medicinal compound, curcumin, then you should be consuming it with black pepper. You can also make a turmeric paste that includes black pepper and coconut oil for improved absorption even further.

Turmeric is fat soluble which means that it is absorbed in fat. If you pair coconut oil (a healthy fat) with black pepper containing piperine already shown to improve absorption of curcumin by 2000% you’ll be creating the best environment to get the most medicinal value out of turmeric that you possibly can.

I personally like the organic liquid turmeric from omica organics which you can learn more about here. If you’d like to read the full turmeric paste recipe (that includes coconut oil and black pepper) you can see full instructions here.