This So Called “Poisonous” Wild Berry is Actually Edible And Free! 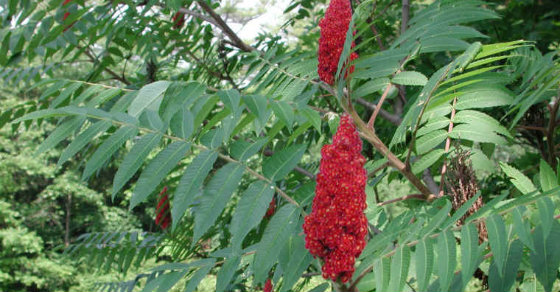 Above is a picture of a berry known as the “Red Sumac Berry” which can be grown and found all over the United States as well as other countries and varieties of this berry all over the world.

I was born and raised in Michigan my whole life and as a kid I was always told that “those red berries in the woods and on the side of the road are poisonous” and my desire to live was greater than my desire to try a new berry so I never touched them, let alone put them in my mouth and tasted them.

About a year ago though, a friend and old roommate of mine pointed the berries out and said something to the effect of look… Red Sumac berries, you can make tea from those. I responded with “those are poisonous dude!” or something along those lines. I didn’t believe him so he broke some of the berries off the branch and we headed back to my apartment to make some tea with this berry that I was sure he was going to die from! Not really, but partially.

He put the berries in water with the branches and all and let them soak for a few hours. A few hours later he poured the slightly pink/reddish water into a cup and drank it. He lived to tell the tale! What a legend! I tried some of the tea and it had a sweet taste, almost like a light pomegranate flavor.

It turns out these berries, known as red sumac berries grow all over the world and have over 200 varieties. They are often found in the woods and on the side of highways and freeways all over the united states. You can pick this berry all over the USA. I have made red sumac tea multiple times since I discovered their nutritional value and that they’re free and have come across them in many different places.

Here are the health benefits of Red Sumac Berries:

According to the scientific and peer reviewed food journal food chemistry it has a very high source antioxidants including polyphenols such as anthocyanins and other flavonoids. This berry has more antioxidants than most common fruits and vegetables.

* Balance Glycemic Levels (blood sugar benefits)
The Iranian journal of pharmaceutical research found in a 3-month study in fall of 2014 that type 2 diabetics had significantly lower levels of blood glucose after consuming red sumac for 3 months.

The Peterson Field Guide To Medicinal Plants and Herbs

shares that the red sumac berry, bark, branches and leaves have been used for asthma, diarrhea, gonorrhea and bed-wetting. This book also say’s that the tea is used for “female disorders” and other lung ailments, herbal tea made from the leaves of staghorn variety of sumac berry has been used for sore throats and tonsillitis. These uses are shared in the book but have no scientific research yet.

The berry has tremendous medicinal value and has been called poisonous by most people, it’s really just a big misunderstanding of mother nature and the true nutritional value of this berry. I highly recommend picking these berries off the tree next time you see them and making your own red sumac tea to taste and benefit from it!

P.S. Please do your research on sumach (sumac berries) the red ones are not poisonous by white varieties are. As with eating any wild food do your homework first and make sure you’re eating the right one!