This is Why You Should Absolutely Breathe Through Your Nose 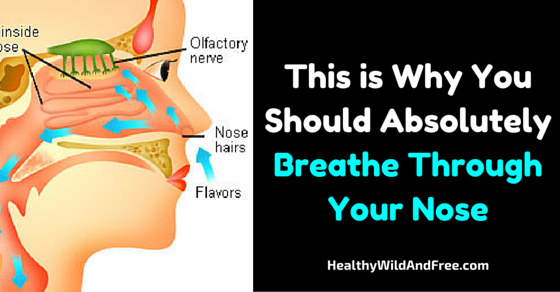 Breathing is the most essential act for staying alive. If you monitor people and their breathing patterns though you recognize some very distinct and unusual patterns. Let’s take a baby for example. A baby laying in a crib will breathe deeply and smoothly and the babies stomach will expand and contract as it breathes. The baby breathes intuitively in a non-stressful manner and is calm, relaxed and tranquil.

Take an adult now, any adult will do… The adult is breathing faster, shorter breaths and instead of breathing deeply the breath is more shallow. Instead of the stomach expanding and contracting the chest rises and falls. These shallow breaths are only chest deep, meaning that if the breath were deeper it would penetrate the body deeper into the stomach.

The deeper the breath you take the more your stomach will expand and contract as you inhale and exhale. This is a good thing. Healthy breathing patterns benefit the body, brain, nervous system and stress response in various ways.

Breathing shallow or deeply is one indicator of how we breathe and it’s important to breathe deeply into our stomach so that the oxygen expands and contracts our stomach. This benefits our life and health long-term. Did you know that close to 80% of the western population breathes incorrectly and this has negative health implications? Breathing shallow is only one of the ways in which proper breathing is misguided.

You take 17,000 to 30,000 breaths a day. How many times a day do you drink water, eat and exercise each day? Well, you may eat up to 5 times or so, drink water maybe 10 times and exercise once. So keeping track of and managing under 20 activities in a day is a much easier task then 17 to 30 thousand tasks each day, wouldn’t you say?

Breathing deeply into the stomach is one way to improve your breathework. By doing this you’re increasing your intake of oxygen. By doing that you’re giving your body more to work with. When your body has more oxygen it can function in a more optimal state. Breathing short breaths into your chest compromise how much oxygen you have. Your state of stress is easier maintained with short, shallow, chest breathing.

Another way you can improve breathework is to breathe through your nose instead of your mouth.

Did You Know That Breathing Through Your Nose Benefits Your Health in These Ways?

It’s clear that nose breathing has its benefits. But what about mouth breathing? are their any benefits or downsides to it? Well, i’m glad you’re curious. Here are the what some researchers believe downsides of mouth breathing to be: