This is What Happens When You’re a Couch Potato 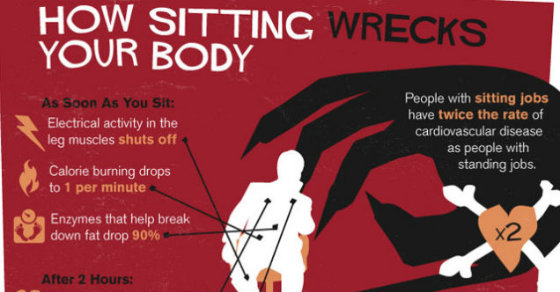 Whether you’re a couch potato for one or six hours on any given day it still affects you. We all have periods where we become a couch potato for a while but for some of us, those periods are far too often and last a bit too long, and new research is showing that laying back and being a lazy couch potato is more detrimental to our health than we had previously thought. New research from Tel Aviv University has found that preadipocyte cells, which are fat cell precursors turn into fat cells more quickly and create even more fat when you lie down or sit down. These long periods of sitting or resting horizontally where we put weight on parts of our bodies are referred to as times of mechanical stretching loads.

To simplify, being inactive causes your body to produce more fat in your fat cells, Essentially the cells themselves become larger and less efficient. this puts pressure on your body’s cells causes fat cells to spread out and grow bigger. What’s even more alarming about sitting or laying for a long duration of time is that new research is showing that rigorous exercising doesn’t counteract the long periods of sitting or laying. A recent study found that men who reported spending two hours or more per day in front of the television had twice the risk of a heart attack or cardiac event than men who reported watching less television. Your risk of a heart attack or cardiac related event essentially doubles by watching two or more hours of television per day.

Not only that but men who spent four hours or more watching television daily had a 50% higher chance of dying from any cause and this study along with multiple other studies found that exercise did not negate the risk of television watching or the effects of the outcome. So what can you do? Watch much less tv and avoid being a couch potato in the first place, we’ll get to those tactics a bit later.

So what actually happens when you sit or lay down for an extended period of time?

1. Immediately after sitting your calorie burning rate drops 1 calorie per minute while you sit. This means that if you sit for an hour you burned 60 calories less that hour than if you were standing. If you stand 5 hours more each day (instead of sit or lay) you can burn 300 more calories each day.

2. Your muscles weaken as electrical activity within the muscles diminishes. If you are immobile and are sedentary (lay or sit) for a 24-hour period, a 40 percent reduction in glucose uptake in insulin occurs, which can eventually cause and lead to type 2 diabetes.

3. You gain weight as your cells become more fatty. The body increases plasma triglycerides (which are fatty molecules), LDL cholesterol (known as ‘bad cholesterol’), and insulin resistance which means your body begins to produce more insulin because your body no longer accepts your insulin which stresses your Liver and Pancreas.

Sitting for over six hours a day seems to be the worst, the more you sit the more negative the affects are. If you sit 6 hours or more daily for 10 or 20 years you can actually cut about seven healthy and enjoyable years of your life! It increases your risk of dying of heart disease by 64 percent and your overall risk of prostate or breast cancer increases 30 percent.

Let’s list everything just to reemphasize. Your cholesterol, weight, blood sugar, insulin, liver & pancreas health, digestive health, bone and joints, cancer risk and cardiovascular disease risk are ALL increased when you sit or are sedentary for hours each day. What can you do if you have a job at a desk or are required to sit for work all day? You can do several things, we’ll get to those in a minute.

Scientists are now trying to find out what amount of time sedentary activity is best without having harmful effects. They currently recommend limiting television, video games, surfing the internet or any other sedentary activities combined to just an hour a day. This seems like quite a low number, especially if you live in America but you can do your best. You can sit at work and convert your sit-down desk into a stand up desk for under 100 bucks on amazon.

At home you can simply not use your couch or chairs nearly as often, you can look at your bed as your laying down and relaxing alter of sorts! I have found that when i’m more active throughout my day and on my feet that when I actually do get in bed I drop like a rock and have a great nights rest and feel very rejuvenated the next morning. We are “wild humans” originally, we were designed to move, harvest food, hunt and make shelter. We are healthiest when we are on our feet throughout the day.

Being healthy not only involves eating a whole food organic diet but being active. If you are living a sedentary lifestyle with a lot of sitting try these ideas.

1. Stand up while watching a tv show, movie, or television. This may sound odd but it will become easier over time and it just trains you to stand more often, especially at times when most people are accustomed to sitting.

2. Stand up while reading! if you enjoy reading find a high counter top and place your book there while standing and reading.

3. Get a stand up desk for your workplace or home office! these little stands can be as cheap as 40 bucks and convert your typical desk to a functional stand up desk.

4. Go for more walks. Our body works better when we walk! our digestive system is improved, circulation and lymphatic drainage are improved and so much more. Walking is easy! so find your favorite trail, park or neighborhood and make it a habit.

Here’s an info-graphic illustrating some further detrimental affects of sitting for too long:

If you can sit for less than an hour a day these factors won’t affect you. You’ll feel better, have a healthier weight and have more energy. Sit less, stand and walk more!