This is What Happens When Mice Are Given Probiotics 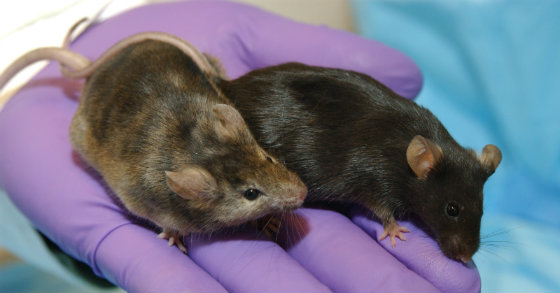 Mice given antibiotics are negatively effected all around, in multiple studies this has been proven. Mice become more anxious, gain unhealthy fat, lose hearing and spread salmonella faster. Their immunity is more at risk and they are not the same mice prior to the antibiotic treatments. You can read the full article to learn for your self how mice are adversely effected by antibiotics here.

Interestingly enough studies have also been done to find the effects of probiotics (good bacteria) on mice, and these findings are very different.

When mice were feed a broth with probiotics they were less stressed with less stress hormones, their brains were more relaxed as well as other chemical changes in the brain. They also showed fewer signs of visible anxiety. In another study John Cryan, a pharmacologist with the Alimentary Pharmabiotic Center at University College Cork, Ireland, and colleagues have found that probiotics have a direct impact on mood neurotransmitters in mice. The findings further support the idea that one way to heal problems of the mind might be through the stomach.

The team then ran the mice, along with 20 mice fed a bacteria-free broth, through a battery of stress tests. In negotiating a maze, the mice that received probiotics ventured out into open spaces more than twice as often as the control mice, suggesting that they were less anxious. And when forced to swim, the bacteria-fed mice were slightly more prone to struggle — rather than give up — than their broth-fed brethren. “These mice were more chilled out,” says Cryan, adding that the effects of the probiotics were similar in magnitude to those seen in mice for antidepressant drugs. Cryan and his colleagues report their results in Proceedings of the National Academy of Sciences this week.

Mice dosed with probiotics showed differences in brain chemistry, too. After the forced swim, bacteria-fed mice had about half as much corticosterone, a stress hormone, in their blood as control mice. The bacteria also seemed to cause redistribution of brain receptors for the neurotransmitter GABA (γ-aminobutyric acid) — the same receptors affected by anti-anxiety medications such as valium — into a pattern most common in non-depressed animals. When the researchers snipped the vagus nerve — which is important in the communication between the brain and the guts — these differences between the mice disappeared.

Not only that but other researchers also found that mice given probiotics help with chronic inflammatory disease by altering the communication between the immune system and the brain.

Not only that but in another study they found that mice given a specific strain of bacteria (a probiotic) that they could not only remove all peanut allergies but also reduce sensitivities to allergies.

One study where mice were given probiotics they displayed less signs of autistic behavior and were more communicative and less anxious.

“Traditional research has studied autism as a genetic disorder and a disorder of the brain,” study researcher Sarkis K. Mazmanian, a professor of biology at Caltech, said in a statement. “But our work shows that gut bacteria may contribute to [autism-like] symptoms in ways that were previously unappreciated.”

Mice were healthier, in a better mood, less stressed, they had less inflammation and had less allergic reactions. They were stronger, healthier and more functional in the world around them when they had a healthy gut flora with probiotics. Antibiotics on the other hand had the opposite effect, the mice gained weight, were anxious, stressed and unhappy.

What does this mean to humans? Probiotics are very influential in overall health and well-being. Healthy gut flora (through good bacteria) is more beneficial than taking any antibiotics. Here are 10 ways to get more probiotics in your daily routine and diet.