This is How You Can Reduce Cold & Flu Symptoms By 85% 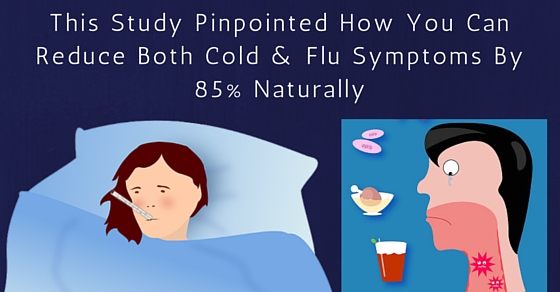 The worst part of the winter time isn’t necessarily the weather. We live in climate controlled homes that have precise temperature control. Sure, the cold sucks! when you have to go to and from your car but for the most part most of us live and work inside during these cold winter months. The flu and cold are not just northern issues though. People in the south also get the cold and flu, although interestingly enough I would venture to guess that less people in the south get the cold and flu each year than people in the north. Why? More sunshine! The southern states and hemisphere get’s more sunshine year round which means people that live in these areas are more likely to have higher levels of vitamin d in their body.

Higher levels of vitamin d keep immunity strong and prevent you from getting the cold or flu in the first place. Vitamin D is a great addition to your diet and supplement routine year round but especially during the winter months. By the end of the winter season approximately HALF of the population in America will have gotten the flu shot. That’s millions of flu shots administered each and every year, with no legitimate proof that the efficacy of flu shots is any better (or even close) to a nutritional protocol.

Personally I have not gotten the cold or a flu in years, probably 5 years or so. I’ve had a stuffy nose here and there, a little bit of excess mucus but I always fought it off with a series of things to ensure that it never turned into the cold or flu. You can do the same, if you did get the flu or cold in a very simple way. In fact, you can reduce both cold and flu symptoms by 85% simply by taking this nutritional approach. There has yet to be any proof or evidence that flu shots are actually more effective than nutrition, I doubt there ever will be unless it’s a nutrition-based vaccine.

Over the counter pharmaceuticals for flu and cold symptoms have climbed yearly and now top $8 billion dollars each and every single year. Interestingly enough in a 2013 study done by the Centers for Disease Control and Prevention they found that older adults receiving the flu vaccine were just as likely to seek medical attention for flu symptoms as those not receiving the vaccine. Beyond that the research on pharmaceuticals marketed to cold and flu sufferers more often than not show lack of effectiveness and high risk of side effects. Point blank both flu vaccines and pharmaceutical drugs for the cold and flu are questionable in efficacy and long-term value.

Thankfully with nutrition we can get better results at a similar cost and without the side effects. In one study led by Dr. H. Clay Gorton, D.C., and published in the Journal of Manipulative and Physiological Therapeutics in 1999, more than 800 students were divided into control and test groups. They then kept a detailed note of the number of reports of cold and flu symptoms within each group. The control group was given pain relievers and decongestants, while those suffering symptoms in the test group were treated with doses of 1,000 mg of vitamin C hourly for the first six hours and then three times daily after that.

The people in the test group, not reporting symptoms, still received 1,000-mg doses of vitamin C three times each day. They reported flu and cold symptoms in the test group following treatment with vitamin C beating OTC drugs by 85% The vitamin c group had 85 percent less symptoms when compared to the control group. Researchers concluded that vitamin C in large doses given either before or after the start of cold or flu symptoms successfully relieved and prevented the symptoms far better than anything else.

Vitamin C is responsible for improved immune function, and when an infection or flu occurs the bodies levels of vitamin C are depleted rapidly because this important antioxidant is needed crucially. You can simply combat that by dosing up on vitamin c in big doses.

Currently the camu camu berry native to South America, grown in the Amazon rainforest floodplains is the most potent source of concentrated vitamin C. This would be the best thing to ingest when you feel a cold or flu coming on. I get a certified organic camu camu supplement (you can either get in capsule form or in liquid drop form from OrganicRainforestHerbs.com.) You can keep this camu camu on hand and if you feel any flu or cold symptoms just dose up on it! Both before and after to completely heal and boost immunity. The camu gold capsules are great, but the camu gold drops are delicious and literally taste sweet like a candy and children love it so if you have kid’s and want them to have a highly concentrated vitamin c to prevent the cold or flu then go with the drops. 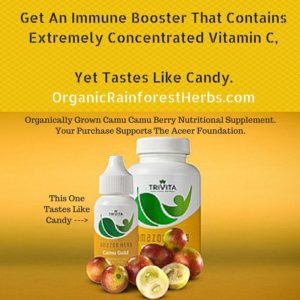