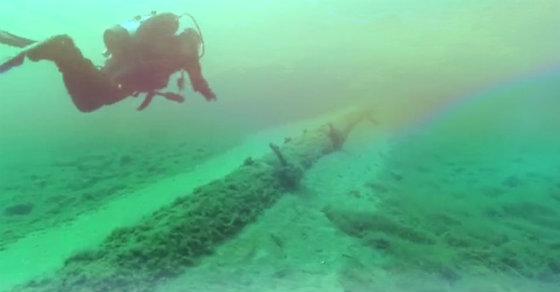 Imagine you are driving your car across one of the largest bridges in America across a large body of water overlooking water on both sides and an island off in the distance. Where are you? on the golden gate bridge in California? Not quite, you’re placed on the Mackinac Bridge which is several miles longer than the Golden Gate on the very tip of northern Michigan connecting the lower peninsula to the upper peninsula. This bridge runs through the Mackinac straits which is a narrow area of water, about 5 miles that connects Lake Michigan to Lake Huron, two of the largest bodies of freshwater in the entire world.

I live in Michigan and have my whole life and have also crossed the Mackinac bridge many times. I visited the upper peninsula of Michigan as a kid and stayed at a campsite overlooking the bridge in the city of St Ignace and would cross this bridge multiple times with my grandfather as a kid who is now buried overlooking this bridge. My sister and cousin have also lived and worked on Mackinac island for a summer, my whole family knows this area very well. It’s a beautiful pristine natural environment with amazing views from the bridge and seagulls flying over the water and all around Mackinac island, an island very well known for fudge and tourism as it’s an island with no cars, only horse and buggy and bicycles.

Under this bridge though there is a deep secret lurking to the people of Michigan, and all of America and Canada for that matter. The largest petroleum pipeline in the world with the capacity to carry 540,000 barrels of oil per day (light crude oil, light synthetic crude, and natural gas liquids including propane) lies under this mega-structure. A pipeline that runs 645 miles from Superior, Wisconsin, to Sarnia, Ontario running 4.6 of those miles under the straits of Mackinac.

75 is the Highway and Bridge. (the pipeline runs through these straits)

The water that runs through these straits is very powerful with a strong current because this narrow corridor is a choke point for two very large bodies of water. There is a lot of pressure in this region because of the water and wind flowing through. Scientists have actually found that an oil spill in this area of all areas an oil could spill is the most detrimental and worst because of changing wind and water directions. The company responsible for this oil pipeline is known as Enbridge Inc. They are a publicly traded Canadian company and have a dirty secret of their own.

They claim proudly that their pipelines are structurally safe and that it has been running and operating for over 60 years without any leaks so why should you or I worry now? well, that’s why i’m writing this. The company fails to take multiple factors into account that the National Wildlife Foundation and many others have been talking about for years.

Liz Kirkwood, executive director of Traverse City-based For Love of Water (FLOW), said that the engineers and hazardous materials risk management specialists retained by her group determined that Enbridge’s underwater pipeline is archaic with no end-of-life plan.

“These pipelines rely on 1950s technology. The protective coatings they use are obsolete and the welds that connect each 40-foot segment are outdated, Six decades of powerful currents and shifting sands at the bottom of the Straits of Mackinac have caused friction that has accelerated pipeline wear.” Kirkwood said.

The company that owns and operates this pipe is already responsible for the LARGEST Inland Petroleum Land Spill in US History on the Kalamazoo River in 2010. This spill was responsible for spilling 1.1 MILLION gallons of oil into Talmadge Creek, a tributary of the Kalamazoo River because of a 6-foot break in the pipeline. The company also took an astonishing 20 hours to respond to this spill.

Because of this leak the National Wildlife Federation looked deeper into Enbridge and their operations with pipelines in the Great Lakes Watershed. They were unable to access Enbridge’s inspection reports, So the group commissioned divers to conduct an independent inspection in 2013.

They found broken supports and unidentified debris covering pipes that Bruce Wallace (NWF Board Chair) described as looking “old and worn and at risk.”

To make matters worse… “Of the Enbridge pipeline spills reported from 2002 to 2010, 16 pipeline spills were caused either by weld failures or from the failure of coal tar enamel coating similar to the coating used on Line 5 through the Mackinac straits.” Which means that the company has averaged two spills per year for 8 years straight in the 21st century.

“The pipelines were constructed prior to the zebra mussel invasion of the Great Lakes and were not designed to withstand their corrosive impact.” Zebra mussels excrete an acidic waste that corrodes exposed steel, Kirkwood said. The Mackinac pipeline is protected by a coal-tar enamel that has failed in other locations, including Enbridge’s Line 2 in Odessa, Saskathchewan. Line 2 was built in 1953, the same year that Line 5 was completed. “Welds from 1953 are simply deficient both technically and due to deterioration over time,” Kirkwood said.

This species was introduced into the Great Lakes in 1988. For 26 years this invasive species has had nothing but time to erode and potentially break the pipeline.  In my mind this reason alone is enough to shut this pipeline down. This pipeline can leak simply because of the zebra mussel waste at any given time and a leak or break in the line could be the biggest environmental catastrophe that America and Canada has ever seen.

This company has had these pipes in place for 62 years. Pipes built that long ago are different than today’s pipes in technological and structural ways. Today’s pipes are more effective at containing because technological and engineering innovation. They are using outdated pipes though that are over 60 years old. Not to mention the zebra mussel waste can and is eroding this pipeline.

To make matters even worse, I know you thought it wasn’t possible, the state of Michigan required Enbridge to install structural supports along the pipeline at least every 75 feet to prevent it from grinding, bending or breaking at weld points. Liz Kirkwood of the organization FLOW accused Enbridge of failing to install as many as 65 of the needed supports.

We don’t even know if this company is installing structural supports required by the State of Michigan. We do know though that the pipeline has broken supports and debris as well as zebra mussel waste on the pipe thanks to the NWF. We can assume though that because of the broken supports and debris and current condition of the pipe along with the companies sketchy history that they are taking shortcuts.

How many reasons can we come up with to put pressure on our Government to shut this pipeline down?

1. The Companies History Of Spills & Carelessness.

3. The Engineer & Environmental Organizations Warning us.

4. The Environmental & Wildlife Effects Of A Spill This Size.

6. This is the WORST Place For A Great Lakes Spill, and it’s been scientifically proven.

7. The Pipe Construction Technology is OUTDATED & Not Able To Handle The Conditions Any Longer.

8. The Gulf Oil Spill Cost The US Government 2o BILLION Dollars, This is your tax money. You pay for corporate mistakes and errors and if this spill occurs it does come out of your pocket in one way or another.

The company claims how proud it is to never have a leak on this pipe and how their operation brings tax money in for the state of Michigan in this PDF on their website. They don’t publicize how they were responsible for the largest inland oil leak or  how between 2002-2010 (an 8 year period) they had 16 pipeline spills at an average of two spills per year but I will.

The National Wildlife Federation is unequivocally opposed to the continued use of this pipeline. FLOW (for the love of water) has spoken. All are in favor of shutting this pipeline down. The environmental organizations and engineers are in agreement about shutting it down and that is rare, so that should tell you something. If you want this shut down and more awareness around this PLEASE share this article and spread the word on facebook, twitter, email it, share it with your Michigan friends. This is important and with enough awareness this will change, i’m just doing my part to hopefully inspire you to do the same.

Please Sign this petition and spread this article to create awareness for others to learn and sign the petition as well.