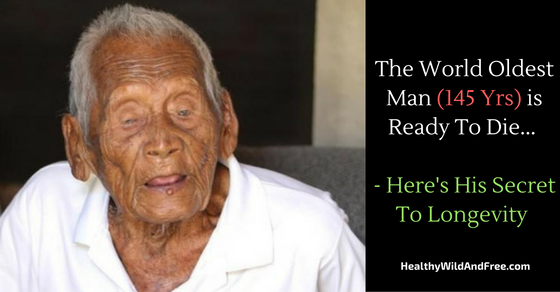 The worlds oldest man has been found in Sragen, Central Java, Indonesia, Mbah Gotho, who is recorded to be 145 years old. The Indonesian civil registry office verified his birth on December 31, 1870 but his birth has yet to be verified by a third party. The record used to be held by French woman named Jeanne Calment who lived to be 122 years old.

Mbah Gotho had four wives during his lifetime and his last wife died in 1988. All of his children have also passed away and now he is left with his grandchildren, great-grandchildren, and great-great grandson.

We see this mans story as beautiful and an anomaly but Gotho has stated “What I want is to die” to local newspapers.

Gothos’s eyesight has diminished over the years so his family find most of his spare time I spent listening to the radio. Gotho has been spoon fed and bathed for the past three months because he’s become increasingly frail.

When asked what his secret to longevity is, Mr Gotho replied: “The recipe is just patience.”

Apart from this story, studies have shown that patience is one of the 6 key characteristics associated with life longevity. The other five are conscientiousness, optimism, socially connected, light heartedness’ and a general happiness no matter the situation. So kick up those feet, breathe a little and have perspective. You are your own key to a happy and long life.

What a full life he has lived. Patience must be quite important for him to share this as his #1 secret to longevity.