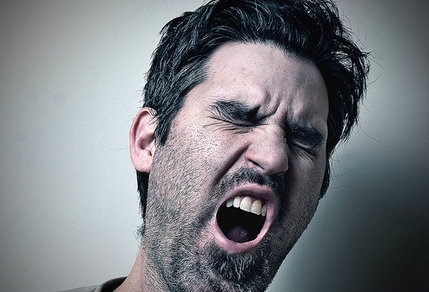 The other night I was talking with my girlfriend and we often have conversations about physiology, biology and the human body because it’s a big interest of mine and she is a certified nursing assistant so she has a unique perspective on the human body as we both do. The topic of yawning came up because I was yawning quite a bit that night after a few days of traveling and a few nights sleeping on a couch and other displaced spots that aren’t my “home bed” where I feel comfortable.

One of the main scientifically backed reasons that humans yawn is to actually release heat from the brain. Your body releases heat through your head and through your brain as heat rises anyway but if your brain is too hot your body will actually have a yawn response. Interestingly enough scientists found that yawning occurs more in the summer. More heat in your body creates more heat in the brain that needs to be released and through yawning.

They also found that yawning was an occurrence for some people before something very stressful such as speaking in front of a large crowd, jumping out of a plane or performing in the Olympics. Why does this occur? Yawning is the natural response of the human body to stress. It’s a way to cope with stress believe it or not. When you yawn your brain and body release certain chemicals such as dopamine, nitric oxide, serotonin, amino acids and oxytocin that help to cope with stress. We yawn to release heat from the brain that is caused mainly by stress.

It’s common thought that yawning means that you are tired and that you need more sleep. This may be true considering stress is reduced by adequate sleep but there’s also more to the story. Yawning itself is an awake form of resting and relaxing the brain. Yawning is a sign that you’re stressed and the changes in your brain is a sign of this. The heat being released and chemical changes that occur in the brain are a stress relaxation response by the body.

Yawning is also the body taking in more oxygen more quickly. The yawn is opening and stretching the jaw muscles to intake a larger amount of oxygen for about 6 seconds you take in cool air that makes it’s way to cool the brain. This is sort of like yoga for your brain as you stretch the jaw and face to open and inhale more oxygen. This physical act of yawning helps to release trauma and stress from the brain and actually makes your brain more alert. When you’re stressed the brain uses more blood rich in oxygen which helps it to cope with stress and trauma as well while still keeping brain alter to perform well. This is why you see lions, tigers and animals in the wild yawn while awake. This is a natural brain performance reaction to stay alert and mentally active even while under stress.

So If you Yawn What Should You Do?

If you begin to yawn this is a notification of a few things. First, that you are under stress and specifically under stress that causes your brain to feel the chemical changes. Your body and brain may also be holding onto too much heat which could be induced by stress and anxiety or even an overactive thyroid or hormones which keeps your body and brain running a little hotter than it should be. Yawning at morning and night is normal because of dopamine levels during these times but yawning throughout the day means more.

You can and should do a few things. Sleep is an obvious way to reduce stress and you’ll notice that most people yawn late at night or early in the morning, why? your body produces stress hormones upon waking that induce the yawn. The yawn is your natural physiological response to awaken your brain and start your day. If you are yawning all throughout the day though this is a big indicator that your body is under too much stress. Sleep is a great thing to catch up on but if you have plenty of sleep and you are still yawning throughout the day your body may be in a chronic state of stress.

Practicing stress reduction techniques such as deep breathing exercises, yoga, meditation, a hot bath and other things may help to reduce the stress response and give you a sense of peace and feeling rested. When most people yawn they feel tired, why is that? it’s because most people who yawn too much are sleep deprived and possibly stressed far too much.

Yawning is a sign that you need more sleep, more rest and relaxation. It may also be a sign that your body produces too much heat (in the form of an overactive thyroid or hormonal imbalances) and the body just needs to release heat from the brain through yawning. A brain that is overheated can impair memory and slow reaction times and that deep long yawn inhales cold air for 6 seconds or so which travels it’s way to the brain to cool it down.

Stress and anxiety are common in our world and yawning is just another sign of that (along with obesity, bags under eyes etc.) and in order to destress we need to take action steps to make stress obsolete and not as common in our lives. If you yawn too frequently during the day (not before night or in the morning which is a normal response to dopamine levels) then it’s likely that you are under too much stress. Here are 50 ideas to reduce stress.