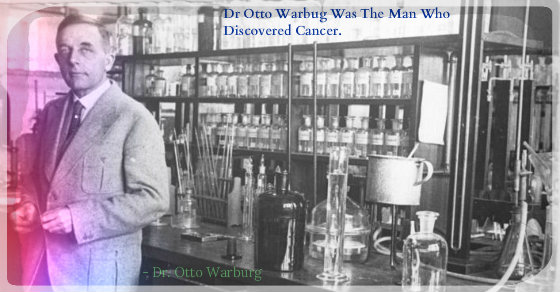 Dr. Otto Warburg was the man who discovered the cause of cancer, he was awarded the nobel prize in 1931 for his work. Initially it was my understanding that he discovered cancer but he actually discovered the cause which in my opinion is even more valuable than discovering cancer. Many people have recognized a problem, a disease, a tumorous lump growing on someone and labeling it a disease. The cause of that disease is even more important and relevant than the disease itself if you want to do something about it. His work came to be known as the “Warburg Effect” or the “Warburg Hypothesis” which basically entailed that cancer cells live off sugar (glycolysis) and that they also thrive in an anaerobic environment. These causes lead me to believe the opposite would help to reverse the cancer growth. What do you think?

He’s one of the most relevant figures in our history when it comes to cancer, what causes it and how to really treat it. Most people have no idea who this man is though, why is that? is it because of what he has to say about cancer and about disease in general? There’s no question that he was a brilliant man during his time. The first man to discover the cause of cancer is somewhat like the first man landing on the moon! it’s just the micro and macro scale of things.

His discovery led him to certain conclusions. These conclusions that he was led to may be true or false to you but i’m going to leave that up to you to decide. I trust this man (the discoverer of it) more than the American Cancer Society or any other medical organization though because he’s worked to get to a place of excellence and understanding of cancer. Large organizations that take your money for a ‘cure’ or to walk around in a circle wearing pink shirts haven’t done a whole lot with the BILLIONS of dollars poured in for research.

Oddly enough Dr. Otto Warburg gave his two cents on what can be done to treat and heal cancer and what changes need to take place in the human body for the human body to no longer have cancer. Let me say that again! the man who discovered cancer shared practical information on how cancer can cease to exist based on his understanding of cancer in his research.

So what was his thoughts on cancer? First, he was quoted as saying: 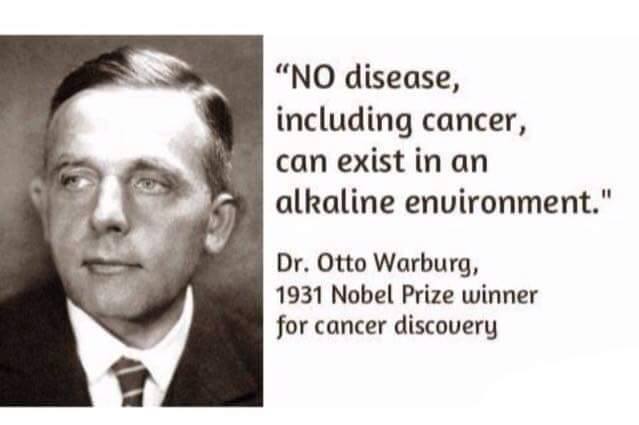 His first belief was that cancer itself cannot exist in an alkaline environment. What conclusion could you draw from this? Foods and drinks that are alkaline are beneficial for helping to remove cancer from the human body. From his research his conclusion was that cancer can not live in an alkaline environment. If you have cancer then wouldn’t it be a natural conclusion to put alkaline foods and drinks such as water into your body as much as possible as opposed to acidic foods which may in fact feed the cancer growth? It’s just a thought.

“All normal cells have an absolute requirement for oxygen, but cancer cells can live without oxygen – a rule without exception. “Deprive a cell 35% of its oxygen for 48 hours and it may become cancerous.” Dr. Warburg has made it clear that the root cause of cancer is oxygen deficiency, which creates an acidic state in the human body. Dr Warburg also discovered that cancer cells are anaerobic (do not breathe oxygen) and cannot survive in the presence of high levels of oxygen, as found in an alkaline state.

How do you do that? More deep breathing. More nature. If you live in the city you are being bombarded by chemicals and decreasing oxygen levels. The country and nature have higher levels of pure oxygen and this was one of the keys according to Dr. Warbug to help the body be in an alkaline environment. Not only that but eating alkaline foods such as vegetables and fruits can help to alkalize the body environment as well.

Believe it or not Dr. Otto Warburg also wrote a book entitled “Cancer: It’s cause and it’s Cure

” which blows my mind. I recommend listening to the recent interview on my podcast with Ty Bollinger as well as reading the Top 6 Cancer Prevention Foods.