These Children And Adult “Medicines” (And Food) Contain This Dangerous Sweetener 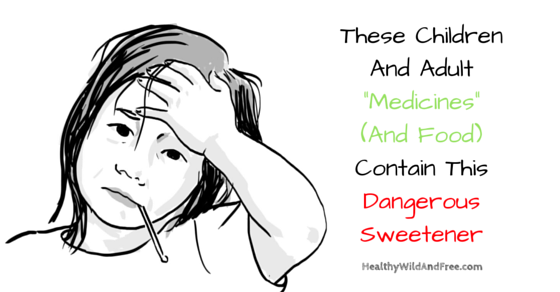 If you don’t check the labels on the products you buy, I highly encourage you to take a look next time your at the store. Aspartame is a common ingredient in many products that are sold on the shelves and even over the counter medicines.

The truth about sugar-free sweeteners like aspartame may shock you, but there are alternatives and they taste just as good- if not better.

Aspartame was introduced in the mid 1960’s. While doing an experiment, James Schlatter accidently discovered the sweetener. Originally, he was trying to develop a new cure for stomach ulcers. Schlatter worked for a company called G.D. Searle, and not long after his discovery the company decided to put aspartame through the testing process, ultimately leading to its approval by the FDA. Within a short amount of time health concerns quickly started to rise. Come to find out, the testing of aspartame in the first place was deemed ok through bad investigators, therefore in 1977 a criminal investigation began. In 1980, the FDA banned the sweetener after having 3 different independent scientists study it. The main reason being that it had a high chance of inducing brain tumors.

Aspartame didn’t stay banned for long. In 1981 Donald Rumsfeld, chairman at G.D. Searle, tried to get it re-approved. Ronald Reagan had just become president and the new FDA commissioner, Arthur Hayes Hall Jr. appointed a 5-person commissioners board to review the prior decision. The vote came out 3-2 in favor of keeping the sweetener banned from approval by the FDA. Hall decided to appoint a 6th member to the board, which made the voting a tie at 3-3. Hall took the final decision upon himself and decided to be the tiebreaker. He voted in the approval of aspartame for use.

“Hull later left the FDA under allegations of impropriety, served briefly as Provost at New York Medical College, and then took a position with Burston-Marsteller. Burstone-Marstella is the chief public relations firm for both Monsanto and G.D. Searle. Since that time he has never spoken publicly about aspartame.”

Whether or not you believe that it is safe, the history and decision making process of the FDA’s approval is extremely rocky. In 1985, Monsanto decided to buy the aspartame patent from G.D. Searle. Monsanto did not have much of a concern about the health allegations following aspartame. It is also important to remember that Hull had a connection with Monsanto at this time.

I’m not an expert, but this raises question as to how much money and scheming was behind this shady process. 38 countries, 28 of them in Europe, have banned Monsanto’s products from entering. GMO’s and Monsanto are a whole different story, but this sheds light on how serious aspartame can be. History doesn’t lie and neither do the side effects of taking this sweetener.

While writing this article, the first thing I did was type “Aspartame side effects” into the google search bar on my computer. The very first thing to come up was from the American Cancer Society and it said this:

“Claims have been made that aspartame is related to health effects ranging from mild problems such as headache, dizziness, digestive symptoms, and changes in mood, to more serious health issues such as Alzheimer disease, birth defects, diabetes, Gulf War syndrome, attention deficit disorders, Parkinson disease, lupus, multiple sclerosis, and seizures. However, studies done to date have not found any consistent evidence of harm.”

People have also reported these side effects:

That is a very long list for 1 sweetener, and none of them are easily forgettable especially if it’s happening to you. Harvard Health wrote an article about artificial sweeteners and questioned the cost of them to our health. I really appreciated the following paragraph’s provision.

“It’s also possible that these products change the way we taste food. ‘Non-nutritive sweeteners are far more potent than table sugar and high-fructose corn syrup. A miniscule amount produces a sweet taste comparable to that of sugar, without comparable calories. Overstimulation of sugar receptors from frequent use of these hyper-intense sweeteners may limit tolerance for more complex tastes,’ explains Dr. Ludwig. That means people who routinely use artificial sweeteners may start to find less intensely sweet foods, such as fruit, less appealing and unsweet foods, such as vegetables, downright unpalatable.

In other words, use of artificial sweeteners can make you shun healthy, filling, and highly nutritious foods while consuming more artificially flavored foods with less nutritional value.”

To add to the long list of possible side effects, this article from Harvard Medicine suggests that artificial sweeteners, such as aspartame, can actually make us reject healthy, whole and nutritious food that is essential to our well-being.

So in which products is aspartame on the ingredient list?

To start, here is a list of over the counter medicines that still have or have had aspartame as an ingredient. These include children’s medicines as well.

As far as food goes, here are some products that you might see at your grocery store that contain aspartame or have contained aspartame in the past.

These lists are just the start. The best way to make sure you’re not getting aspartame into your daily routine is to check the ingredients before you put it in your cart for checkout. It may take more time, but it is the smartest way to ensure that you are eating the best that you can. NON-GMO and organic labels are your best bet to staying away from unnecessary added sweeteners like aspartame. If you’re worried about finding substitutes that are just as good, head to your local health food store for those staples. I promise you will find aspartame free gum and little candies that are light on the sugar but also aspartame free.

It is so important to take care of your health today and not put it off until tomorrow or the next time you go to the grocery store. Take ownership of loving who you are and the roles you were meant to play. You simply can’t do that by feeling under the weather and not like yourself. You are what you eat and cutting aspartame out of your diet can be a crucial part to your success in life.