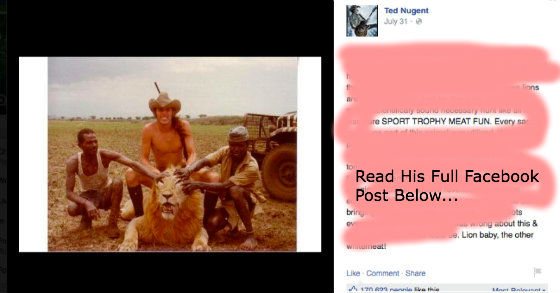 Every once in a while I come across something widely talked about in mainstream and social media and think it’s worth sharing my two cents to “tell it like it is” in my case at least, and hope that a few people agree with me or see it in a new light. Recently there was a lot of talk about a few Lions (Cecil & Jericho) in Zimbabwe which were being hunted by an American dentist.

This hunting is illegal for those unaware. As far as laws are concerned I have the Bob Marley philosophy of “Every Law is Illegal” but with something like this I think as a human being it’s important to be aware. The long story short on the hunting of Cecil or Jericho (i’m not sure which) in Zimbabwe as of late has gotten a lot of attention. An American Dentist thinks he can go over to Africa and act in an illegal way for sport. I’m unsure why the ego on these hunters seems to be so corrupt. They are fueled more by ego than by common sense.

The interesting thing that came from all this unexpectedly though is Ted Nugent’s perspective on it all. He came out of the closet (the facebook one) recently sharing how hunting lion’s for sport is and I quote… “Pure Trophy Meat Fun.” As you can see below this is Cecil the lion’s greatest grandpa. If you know the family lineage of a particular animals family all the way in Africa then there’s a good chance there aren’t many of them left, and in fact, the lions are endangered.

I’ll let you read his entire (ignorant, very much so) post below. 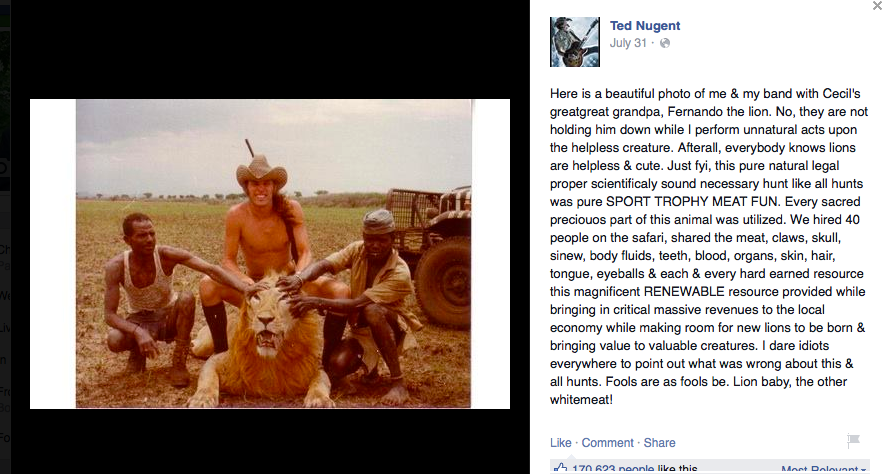 As you can see, he believes that hunting an Endangered species is a “RENEWABLE” resource (all caps too).

According to Wikipedia, A renewable resource is an organic natural resource which can replenish to overcome usage and consumption, either through biological reproduction or other naturally recurring processes. Renewable resources are a part of Earth’s natural environment and the largest components of its ecosphere.

As you can read a renewable resource is something that replenishes itself by biological reproduction, Lions can do that but when they’re endangered the story changes… Wrong again Ted.

He believes that monetarily he benefits the local economy, by what? buying gas and food? Please Ted, you’re worth no more than any other human being there monetarily. His “critical mass revenues” “argument” (if it even is that) is a joke.  Nice job on aligning with the 99.7% of republicans that listen to your music though Ted, i’m sure they all think you’re right and argue on your monetary behalf.

The common thread I have seen with the poaching types is that they seem to be rich and powerful, one, the other, or both. Whether it’s Ted Nugent or Bob Parson’s (the CEO of Godaddy.com) killing Elephants. They seem to have an ego larger than the average human being and see this as some sort of sport. Killing endangered species is not a sport, it’s an injustice act upon our earth that I guess karma itself will have to balance out.

I think celebrities (and brands really) such as Ted Nugent and Godaddy should be boycotted. They have no respect for the life of these animals. You can leave your comments on his post here.