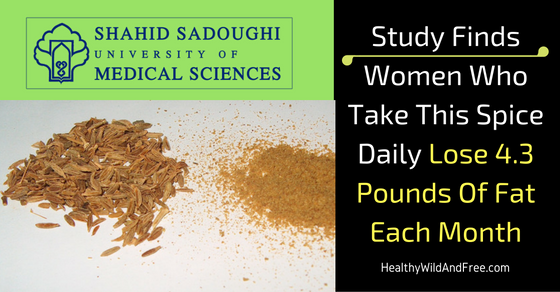 I love coming across health studies that share the value of a food, herb or spice. It excites me to know that something we can grow in our backyard has the power to improve our health, prevent disease or even reverse it. It’s a passion of mine and I hope that it is becoming a growing passion for you too. The more educated you become on plants, food and nutrition the easier it is to navigate your health.

Browsing pinterest today, I discovered an incredible study from Iran where researchers had found that women lost 14 pounds of fat in 3 months (4.3 pounds per month) by adding one spice to their diet. Intrigued, I visited the website and found the study. But had to do a bit more digging to find it in it’s entirety.

The study was done in Iran with a group of 88 women. They split the women into two groups. 44 women each. All of the women were obese and the goal of the study was to find out the effects of the variables.

Researchers at the Shahid Sadoughi University of Medical Sciences in Iran ran the study. For a 3 month period both groups received counseling on nutrition and decreased their daily intake of calories by 500. This was the first change in the study that occurred. We’ll discuss that more later and how it can be subjective. One of the two groups was also eating 3 grams (this equates to a little less than 1 teaspoon) of cumin powder daily, swirled into 5 ounces of yogurt The group not consuming cumin also consumed the same amount of yogurt.

To clarify there were 2 groups of 44 women each. They all ate 500 calories less each day.

The results from this trial surprised me. Wait until you hear my take on it and what you can do to improve upon it at the end of this article. Make sure to read it fully, you’ll benefit from it.

At the end of the 3-month study, people in the cumin group had lost 13 pounds. That’s 4.3 pounds per month on average. What is really impressive about this study is that the cumin group members decreased their body fat percentage by 14.64%. This was almost three times as much as the 4.91% fat loss achieved by the control group. The only conclusion is that cumin, a fat burning spice was the only different factor that attributed to burning fat almost 300% more effectively.

The group of 44 women who ate just under 1 tsp of cumin got quite incredible results from this spice. Cumin is a spice rich in phytosterols. These are naturally occurring plant chemicals that inhibit the absorption of cholesterol in the body. This is the first research that shows cumin has fat burning (healthy weight loss) benefits. The authors of the study also think that cumin, like similar hot spices most likely increase metabolic rate for a short period of time.

The increase in metabolic rate enhances fat burning and helps those people consuming cumin to benefit for that period of time that cumin is absorbed in the gut.

My Thoughts On The Study

I think this study was tremendously valuable in pointing out a few things. First, that cumin has exceptional fat burning potential. If your ability to burn fat is increased by almost 300%, it’s something to include in your diet if you’re looking to build fat, that’s a given. You can start with 3 grams (basically, 1 tsp per day) which is a great start and has already been proven to work.

There were a few things I would change in this study if I were looking for the best outcome. Based on my research, in reading into fat burning foods, herbs, and spices. One of the biggest misconceptions in the world of diet and nutrition is that calories play the largest role in fat loss. You hear it all the time. If you want to lose weight, eat less and exercise more. It’s just not that simple though, unfortunately.

Here’s why, hormones play a large role in your body’s decision to burn or store fat. If I stop eating less such as the subjects in this study ate 500 less calories each day, guess what can happen? My fat storing hormones can kick in. Why? I’ve just cut my daily calories in a way I have never done before. My body’s response is to increase fat storing hormones such as cortisol that tell my body to store fat because there’s a less intake of food. It’s our innate survival response kicking in.

Let’s debunk this myth. The eating less may or may not work out. It depends on the hormonal situation your body is currently in. Not to mention that if I eat 500 less calories and the 500 calories I cut out are healthy foods. I keep the junk food in my diet but I am eating less! Guess what happens? you’ll pack on more fat. If your body doesn’t have the micro-nutrients that it needs to operate efficiently it will not burn fat. Simple as that.

Calories come secondary to the quality of those calories. Those calories if rich in micro-nutrients can be increased and you can still burn fat. In that case you’re giving your body more nutrients and compounds that enhance digestive and metabolic function.

If this were my study I would not focus on eating less calories. I would modify the caloric intake in the diet and focus on increasing the consumption of micro-nutrient rich foods such as vegetables and fruits and not pay as much attention to the macro-nutrients.

Lesson in Calories: Change the micro-nutrient ratio of those calories and you don’t have to cut 500 calories.

Beyond that the study used yogurt as a control food for both groups to mix the cumin in. Yogurt does not offer much nutritional value. There’s some protein, a few vitamins, and that’s about it. Even then the yogurt is pasteurized and homogenized and the heating process does what? Kills the nutritional value. Eating yogurt is high in calories and low in micronutrients. Beyond that, most become bloated or have some sort of inflammatory response in the gut from dairy. This inflammatory response causes you to gain fat over time.

Long story short, if you just took the cumin lesson from this study and applied that, ignored yogurt and caloric restriction you’d be even better off. Give it a shot! You can get organic cumin to add to food (or just add it to water, stir and drink daily) on amazon here.