I Promise: Watching This Inmate Speak Will Inspire And Educate You in Unexpected Ways 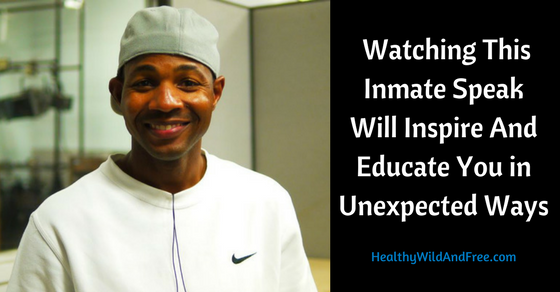 Every once in a while I stumble upon a video on youtube that is too inspiring not to share. Today was one of those days. I stumbled on a video of someone named Curtis Carroll. He’s been called “The Oracle of San Quentin” as people are comparing him to Warren Buffett with his understanding of financial literacy.

I watched a few videos of him speaking and was captivated by his message and inspiring story of transformation.

Curtis grew up in poverty in the inner city of Oakland. His mom was addicted to drugs and he grew up looking for any financial opportunity he could find to simply provide and get out of poverty. He recalls his mother selling her blood at a local blood bank for $40 just to feed her 4 kids.

Why Curtis Carroll’s Story is Important To Me Personally

Since I was a young kid I have connected with the stories of people in the inner city. I grew up in the suburbs but my parents were very loyal to our church which was active in inner city communities. I learned a lot in my youth about the struggle of living in the inner city and growing up in poverty. I had friends from the hood that I saw once or twice a week at church that would talk about the shooting on their street over the week. I connected with my friends from the inner city because my parents raised my siblings and me to work hard and with a mentality of earning to get ahead and having nothing handed to you. I had a paper route before I was even “legally” allowed too. My mom wanted her kid’s to get ahead so she got the “job” and gave it to her kids to do.

I was working as a kid. The paper route was one job. I would also shovel driveways in the winter time. I would babysit kids in the neighborhood and do any odd job that I could to get a few bucks. I was a golf caddy at 12 years old. I worked at a shoe store in high school. The difference between my childhood and someone growing up in the inner city is big. I had the opportunity to work, advance, get ahead, get a job or two in high school. I had many safe and LEGAL opportunities to earn money. Growing up in the inner city, the comparison is simply not the same. The lack of local businesses, the lack of money to spend and the lack of available jobs for youth in inner cities is a vast difference from the childhood I was blessed to have. I am grateful for the opportunities I had growing up. I am also grateful that my parents withheld things and taught us the value of working and earning a better life.

There were things that my family had that other families had but we, the children actually earned it. When we went on a family vacation we would take money out of our “paper route” fund that all of us worked towards earning every single day, 7 days a week. When other kids were sleeping in on the weekends after a week of waking up early for school my brother and I were waking up at 7 in the morning, getting our skates on and hitting the neighborhood to get our work done. I learned the value of work ethic but I understand that I had more opportunities to work than most people growing up in the inner city as a kid, and because of how I was raised I took every opportunity I could to earn money. I had to earn my way into something that I wanted because my parents didn’t hand me much.

Later on as a teenager I volunteered to work at a kid’s camp in Connecticut known as Camp Hope. It was at this camp that I connected with youth (from the age of 8-12 or so) that were from Brooklyn, The Bronx, Harlem and other inner cities in Connecticut such as Bridgeport and Hartford.

These experiences shaped my perception of lifestyles in America in a lot of ways. I am grateful for these experiences and always want people from different cultures and socioeconomic status to see different perspectives. I believe that this is one of the most valuable gifts in life. To learn from other cultures, people and learn to develop compassion and empathy in life. That’s what we are meant to do as human beings.

Long Story Short, Curtis Didn’t Have These Opportunities in Oakland Growing Up

Enter Curtis Carroll, he didn’t have the opportunities growing up that I did. He had very few legitimate opportunities to get ahead financially growing up in Oakland, California. Life was difficult. Life was tough. Imagine living every day seeing your mom making sacrifices that no other mother would have too. Living up with drug dealers and hustlers as role models skews your vision of what’s possible, whoever you are. You have to see pain in doses that most people simply cannot handle. This pushed Curtis to the edge. He developed a blind eye to crime and developed a heightened sense for opportunity. This was part of his journey, his struggle to survive was to evolve in this way.

He shared that he simply viewed crime and things that most people would see as wrongdoing as simply an opportunity. Something that has a human connection and is humanized became no longer humanized. This led him to getting in trouble with the law and a 54 year to life prison sentence for a series of crimes that I am sure after watching his interviews he sees completely different today.

For Curtis the changes in his life occurred when he decided to educate himself and to learn to read. Watch his story and inspiring speech in this TED Talk here:

As I was watching this I caught myself going “YES” and mine as well just throw a few “AMEN’s” in there too. How brilliant this man has become from being illiterate is mind blowing. I have interviewed Harvard Professors, best-selling authors and some of the most brilliant minds on the Healthy Wild And Free podcast and this guy can keep up with all of them easily, if not surpass a chunk of them. His literacy of not only finances but life (let’s call it life literacy) is a message that needs to be heard by millions.

I resonate strongly with his message because he teaches literacy in life, not just finances. He makes a very important connection though. Crime is usually financially motivated, that financially motivated crime comes from a root cause of lack of financial literacy. I believe that this guy will impact a lot of people with his message and will truly help minorities to think and view things differently.

If you enjoyed that video you’ll probably really enjoy this in-depth interview even more:

Probably my favorite quote from this interview was:

What Curtis “Wall Street” Carroll is teaching the world is to be financially literate. Don’t waste money on frivolous things. Be smart, invest smart. Use financial literacy to your advantage. I align with this so much because my vision is to teach health literacy. To teach people to avoid pharmaceutical drugs and vaccines in order to invest into holistic and natural nutrition and medicine that is cheaper and side effect free.

What impresses me most is that he took his life from an all-time “low” and is not only making the best of it but using it as a platform to inspire millions. His message to take responsibility, learn, be literate, improve, evolve, feel and pay attention to your emotions is a lesson every person in America needs to hear. Curtis is a man who keeps it real, isn’t afraid to shed a tear when he needs to and is dedicated to his own excellence. Curtis is redeeming himself and his past in many ways. In my mind, that’s a true man. I’ve been so inspired by his story that I may try to visit him in San Quentin later this summer for an in person interview. If that happens, follow and stay tuned. Would be fun.

You can learn more about Curtis Carroll, Curtis “Wall Street” Carroll at WallStreetFeel.com