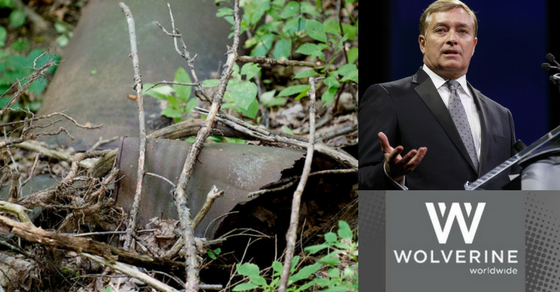 I spoke with my mom recently and she had some disheartening news to share with me. A shoe company in the hometown that I grew up in was just recently found to be dumping toxic waste for years all over a span of a few small cities in West Michigan. The company, Wolverine World Wide (stock ticker: WWW) has been dumping rubber, metals and scotchgard contaminated toxins (PFOS & PFOA’s) into a growing number of dump sites currently being unearthed. I couldn’t believe it. As a kid my friends, brother and myself would ride bikes downtown Rockford, Michigan and would always comment on how weird the smells were coming from this shoe manufacturing facility. Turns out, wolverine world wide was dumping toxic chemicals in the Rockford and Belmont Michigan areas since 1959.

At first it was one dump site, then it was two. Now there are six known dump sites where they dumped their toxic waste. I wouldn’t be surprised if there are 6 more, 10 more or a whole string of these laid out even further. The main toxin to be concerned with in this region that has influenced the drinking water is the perfluorooctane sulfonate (PFOS), this was found in Scotchgard up until the year 2000. Apparently scotchgard removed this chemical from their product but i’m sure it was replaced with something else that happens to be carcinogenic as well.

Scotchgard was used by wolverine world wide to protect their shoes from water damage. The problem is that they just dumped their waste into 6 sites around the cities of Rockford and Belmont, Michigan. What does that tell you? That wolverine world wide was dumping for most likely years before 2000, as well as after most likely. It’s 2017 and people have been drinking this toxic water for years without knowing.

WWW Has Been Dumping Scotchgard in Dump Sites For Years

One site that was tested found levels at 540 times the safe limit of toxicity level for this PFOS and PFOA chemical.

This man died from cancer only for his wife to find out that their water was extremely toxic thanks to a dumping site that Wolverine World Wide used by their home.

The middle school in Rockford (one of the two) completely turned off their water and drinking fountains. That should tell you something. They’re worried and fear the worst as they should. They’ve been dumping toxic waste, multiple barrels each day since 1959. Even with 300 days of dumping each year at 4 barrels a day you’re looking at 1,200 barrels each year dumped wherever they could. Do the math. It’s been 58 years of dumping if they have been dumping up until this year and that’s at the rate the guy in 1959 described! The company has grown probably 100x since then. Even at that rate. That’s 1,200 barrels per year x 58 years. That’s 70,000 barrels of toxic waste. Who knows if this number is off, low, high or what. That is completely possible though based on a 1959 estimate if the company hasn’t grown at all. How scary is that?

This is frustrating to me for a few reasons. First, I worked at the main headquarters, the retail shoe store for this company growing up. Second, my family grew up drinking tap water about a mile from their headquarters. The smell was always toxic and that concerned me even as a young kid that something was off.

ANY company that puts their profits before the environment and the HEALTH of the people in that community DESERVE to pay the price for their LACK of integrity, lack of ethics and lack of honesty.

How much did you make last year? If you’re in the top percentage of the economic society you made $100,000 or slightly more and even then you’re doing better than the majority of the population, far above the median income of an individual in the united states in 2016 was $31,000. I bet if you’re reading this you earn in that neighborhood somewhere.

Did you dump toxic waste chemicals in multiple waste sites spanning across multiple cities that contaminated the drinking water of thousands of people? I bet not. It’s a shame that we live in a society that STILL to this day puts profits before people. Greed before humanity. The bottom line before the earth we live on.

We can’t let Wolverine World Wide continue to do business like this, in fact, at all. Interestingly enough the company is moving from it’s headquarters in Rockford, Michigan to an even larger warehouse facility in Beaumont, California. They’re opening a 720,000 square foot distribution center there. Full story from Fox here. I already feel sorry for the people of Beaumont, California and the surrounding areas. The shit is just hitting the fan here for them and they happen to be packing up and leaving in a few months. Convenient, huh?

Hearing this story pissed me off. Why? My mom had stage 4 colon cancer growing up. My oldest brother (the first born in my family) was born with a birth defect and we don’t know why. We think it was from accutane (a dangerous acne drug that the FDA approved) that left my brother with a side effect for life. Hearing this news made me wonder if the water I had growing up was tainted in even a small way growing up that had an effect on MY family. I do not know. Probably never well.

What I do know though is that what WWW (wolverine world wide) did was wrong. Wrong morally. Wrong ethically and wrong because it effected the environment and the health of my community, my family and friends in a negative way. They didn’t have any regard or take any precautions to dispose of their waste in an environmentally friendly way. They did absolutely nothing. The same mentality from the people that let the Flint water crisis happen runs rampant in our world. These executives from wolverine world wide thought this was okay to do.

Well, it’s NOT. It never will be. I will stand up for the environment and the health of MY family, my friends, my neighbors and community. This hits home for me and if we don’t STOP these companies from growing and do everything we can to make them pay… they will continue to dump and will probably start dumping their toxic waste somewhere near Los Angeles if I had to guess, since their 720,000 square foot distribution center is moving there.

Here are my thoughts on video

There are 3 Things We Can Do To Create Change: