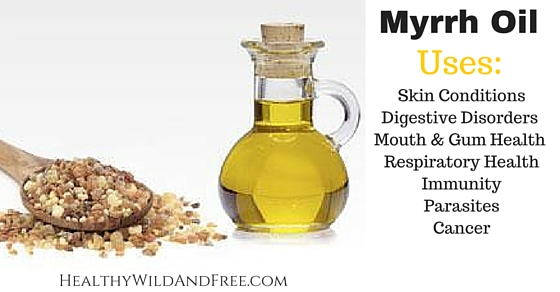 Myrrh is a resin, or sap-like substance, that comes from a tree called Commiphora myrrha, which is most common in Africa or in the Middle East. Myrrh is botanically related to Frankincense, it is one of the most widely used essential oils in the world, and for good reason.

It was also one of the three gifts that the bible illustrated was given to Jesus by the wise men for his birth. Gold (which could have been gold or turmeric as it’s gold in color), frankincense and myrrh. Thinking to myself I thought there must be a reason that these gifts were given, they must exemplify extraordinary value in terms of both physically and spiritually. It is said that frankincense essential oil is a great oil for meditation and spiritual guidance, along with intuition. I have been using frankincense as of the last few months internally and topically and can honestly say that my intuition has increased, and so have the synchronicities (meaningful coincidences) in my life which has been cool to experience.

I love both oils and think they both have extraordinary health and wellness value that benefit your life.

The word “myrrh” comes from “murr,” which means “bitter” in Arabic, probably referring to the resin’s bitter taste.

Ancient cultures in Egypt, Africa and even the Chinese valued this valuable tree and oil. Greek soldiers used it to stop bleeding wounds in battle, the Egyptians used it to for embalming purposes.

One of the main benefits is actually skincare and healing wounds. If you have any wounds, bleeding, or skin conditions such as acne, psoriasis, eczema, athletes foot, ringworm or any other skin condition myrrh essential oil would be worth trying out topically. It helps to treat dry and cracked skin as well to keep it moisturized and prevent fungal or bacterial infections as well as treat any current infections.

It’s a great antiseptic to help heal wounds as well as a potent antioxidant. One study in 2010 with rabbits in the journal of Food and Chemical Toxicology found that myrrh could protect against liver damage due to its high antioxidant capacity.

Myrrh also has anti-cancer (cancer prevention) benefits. A 2011 found that myrrh was able to reduce the duplication of cancer cells in humans. This is incredible. If cancer cannot grow further than what it is (stage 2 or 3 etc.) then it is not nearly as much of a threat. I’d use myrrh essential oil as a cancer treatment over chemotherapy any day of the week. Researchers have found that myrrh inhibited growth in eight different types of cancer cells.

Take a look at some more benefits of Myrrh Essential Oil:

Myrrh oil has many health values and therapeutic properties for health and well-being. It’s also a great oil to be used for massages and relaxation as it calms the mind and body alike.

The compounds in myrrh oil, known as terpenoids, are a class of chemicals with anti-inflammatory and antioxidant effects. It also contains up to 75 percent sesquiterpenes, these are compounds that can affect certain parts of your brain, particularly your hypothalamus, pituitary, and amygdala. These parts of the brain control your emotions and produce many important hormones in your body.

Myrrh essential oil is great for relaxation, digestive health, respiratory health, the brain, emotional health, skin disorders, gum and mouth health as well as boosting immunity.  You can message me on facebook to learn about how I use oils and where I the highest quality oils.