Is There A Missing Link Between Bra Use And Breast Cancer? 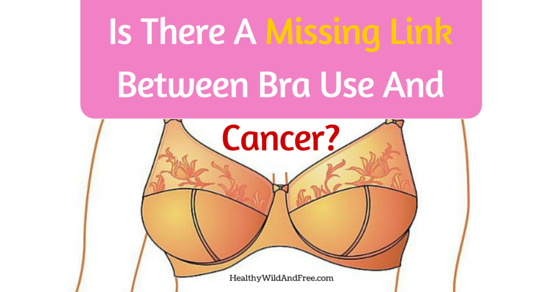 For years I have gone regularly without wearing a bra, and I definitely have felt different from doing so. With all of the great feelings that came with it, I set out to figure out the health benefits that come from not wearing a bra. With this, I wrote my previous article of why you should avoid wearing a bra as often as possible. I found that by avoiding bra use, women can improve digestion, breathing, and even improve sleep. But the more I read, the more I was beginning to understand alarming connections between bra use and… breast cancer!?

While I am not saying bras cause cancer, as there are various factors varying from person to person, I do think it’s important to at least shine light on some of the details being overlooked in order to understand our bodies a bit better. These are details to be looked at, and if we can take away one of the factors to potentially save us, we absolutely should! In writing this article, I hope that the women in my life, and the women in your lives, and you, yourself, can be informed and take the necessary steps to living your healthiest lives. Let’s take a look at some of the information I found.

Melatonin is a hormone that has antioxidant properties, anti-inflammatory effects, anti-aging properties, aids in immune function, and regulates female menstrual cycle and other hormones. It is no surprise then, that having insufficient amount of melatonin in the body can produce negative effects on the body.

A study published in The Journal of Biological and Medical Rhythm Research looked at the correlation between bra use and melatonin and found that wearing a girdle or bra causes an increase in body temperature, lowering levels of Melatonin by 60 percent!

The University of Maryland Medical Center, as well as several other studies, show that low levels of Melatonin are reported in individuals that have breast cancer. In one small study of women who were taking tamoxifen for breast cancer but seeing no improvement, adding melatonin caused tumors to modestly shrink in more than 28% of the women. From BreastCancer.Org, “some studies have found that women with lower levels of melatonin, such as those who work the night shift or sleep fewer hours, have a higher risk of developing breast cancer. In the lab, melatonin appears to slow the growth of breast cancer cells”.

The final connection: Bra use lowers melatonin production by approximately 60%, and women with lower melatonin have a higher risk of developing breast cancer.

Bras decrease body’s ability to allow for lymph drainage, increasing chemical stagnation in body
According to CancerResearchUK.org, “the lymph system is an important part of our immune system. It plays a role in fighting bacteria and other infections and destroying old or abnormal cells, such as cancer cells”. The lymphatic system is self run and it relies on movement. When bras hold our breasts inward with no movement, chemical stagnation occurs. When constriction from bras occurs, the lymphatic system cannot partake in free-flowing drainage, which is necessary for the body to detoxify waste products and carcinogenic substances such as PCBs, DDT, dioxin, and benzene.

Dr. Michael Schacter, M.D. in his article, The Prevention and Complementary Treatment of Breast Cancer states that, “over 85 percent of the lymph fluid flowing from the breast drains to the armpit lymph nodes. Most of the rest drains to the nodes along the breast bone. Bras and other external tight clothing can impede flow.

The nature of the bra, the tightness, and the length of time worn, will all influence the degree of blockage of lymphatic drainage. Thus, wearing a bra might contribute to the development of breast cancer as a result of cutting off lymphatic drainage, so that toxic chemicals are trapped in the breast.” Researcher David Moth found that even wearing the lightest bras place pressure on the lymphatic system.

The final connection: Bra use cuts off the natural flow of lymph, and excess chemicals in lymph can create chemical stagnation and cancerous cysts to form.

Bras constrict your ability to breathe deeply, I mean real unconstricted breathing. No matter how deep you think you can breathe, at one point or another your bra stops you by putting pressure on your chest. Breath is life. When you are able to breathe deeply and you are relaxed, fresh oxygen pours into every cell in your body which increases the functionality of every system within your body. Dr. Otto Warbug, biochemist, has discovered that cancer development can result because of lower oxygen levels in the body, and that cancer cells simply cannot live in the presence of high levels of oxygen. The constriction of the diaphragm from bra use means that breathing must instead come from the muscles of your upper chest, and you do not get the full range of breath, thus lower levels of oxygen in your cells.

The final connection: Bra use cuts off the ability to breathe deeply, diminishing the ability to bring in high levels of fresh oxygen, optimizing the environment for cancer to grow and thrive.

Nearly all of the underwire in bras are contained of metals. From many sources, it is said that metal acts as an antenna which will attract electromagnetic fields (EMFs). The International Agency for Research on Cancer (IARC) classifies electromagnetic fields (EMFs) as ‘possibly carcinogenic’ to humans that might transform normal cells into cancer cells. This applies primarily to the high frequency EMFs in the environment from cell towers, Wi-Fi, TV and radio stations, cell phones and in-house electrical appliances.

In a study that looked at EMF exposure and the Pineal melatonin level disruption, it was concluded that there was a “significance of disruption of melatonin due to exposure to weak EMFs, which may possibly lead to long-term health effects in humans”. Likewise, as offered by Dr. William Pawluk, “two studies demonstrated that women sleeping in bedrooms with higher average measured magnetic field levels have decreased average levels of melatonin production at night”. So, it is no surprise that if EMFs are associated with lower levels of melatonin, and your metal underwire bra attracts EMFs, that there may be some correlation to breast cancer.

The final connection: Metals in underwire bras attract electromagnetic fields, which in turn can decrease melatonin production, with low melatonin levels seen in those with breast cancer.

I would like to note that the breast cancer society states “there is absolutely no link between bras and breast cancer”. As with the information I presented, I find it hard to believe that bra use ABSOLUTELY does not have a link to breast cancer. Do I believe in its’ causation? Not necessarily. But correlation? Seems to be something there. The Pain Research institute provides the statement that “even if the exact mechanism is not known, the correlation between wearing a bra and breast cancer is 4 to 12 times greater in significance than the connection between smoking and lung cancer”. Although many will claim there is not enough evidence to support this idea, and many try to refute or debunk the correlation, if we look at the individual details, we can see the connection.

Don’t get me wrong, there are various factors that go into breast cancer, and in no way am I saying that bras cause cancer. Just because you wear a bra, does not mean you are going to develop cancer. And just because you DON’T wear a bra, does not mean you are not going to develop cancer. However, it is really important to protect ourselves and take preventative action given the correlation amongst certain factors. There is evidence that bra use is not the best for your health and given the connection, it is best to make the choices to take care of your health NOW. Prevention is always smarter and easier than having to cure! Similarly, I am not here to sell you on wearing a bra, or not wearing a bra. That is for you and you only to decide. What I am here to do is educate women and bring forth information that you may not otherwise have known in order to empower women to make decisions that best suit your lives. Only you know the truth of your body, and hopefully by getting all of the information you need, you can make the decision to live your healthiest and happiest life. But hey, there is no harm in being cautious. For myself, I will continue to let my own girls be untamed by a bra….allowing the tatas to be healthy, wild, and free. 🙂