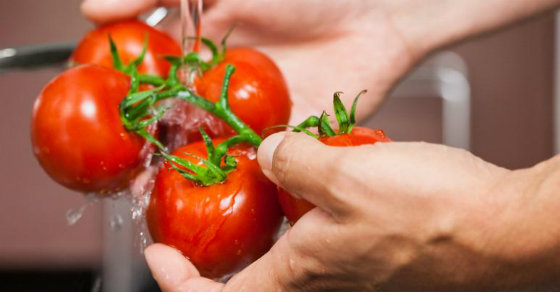 Most of us know that eating healthy just simply means eating more whole foods. More fruits and vegetables in our diet and less junk, processed, sugary, and GMO food is a given but there’s one issue with fruits and vegetables that’s a little difficult to escape. I personally do my best to eat mostly organic because I know that organic produce is grown without fertilizers, ‘cides’ (the word cide means ‘die’ or ‘kill’) and there are many cides sprayed on crops. Everything from pesticides to fungicides, insecticides, herbicides, and several more. Also, 65% of produce analyzed by the U.S. Department of Agriculture tested positive for pesticide residue on them.

Eating organic means your vegetables and fruits are grown with a lower amount of fertilizers and pesticides, it doesn’t mean they are completely void of everything, this is the standards coming from the USDA. Some farmers grow completely free of any fertilizers or chemicals and some use what is considered okay to use but can still get by with it being certified organic by the USDA. You can look into this further, the USDA will still consider something organic if it isn’t grown completely up to your organic standards. There is a list of approved products and things to use on the soil for organic crops.

Personally I just want the seed (heirloom), the water, and the organic soil… sunshine and time to grow my food. That’s just not the case yet and I don’t have much of a say in it unless I grow my own food which I plan on doing when I own land one day. For now though, I can do my best to get organic at the store and if I do get any conventional produce to wash it and use the best of my ability to remove any chemicals from the fruits or veggies.

It’s a simple process and it’s an organic cleaning process. You’ll be surprised to know that most natural/holistic minded people recommend using white vinegar to clean produce and I do not recommend that at all because GMO corn is used to create white vinegar. Washing your conventional produce in a GMO-based vinegar isn’t going to do you nearly as much good as what i’m about to share with you.  White vinegar can be used as long as it’s from the brand Spectrum because heinz white vinegar is made from GMO corn. That’s one solution, used non-gmo organic white vinegar.

How To Remove Pesticides From Fruits & Vegetables

Step 1: Place organic spectrum vinegar with 3-5 drops of 35% food grade hydrogen peroxide in a bowl with water. Use 90% water to 10% organic vinegar, for example… If you have a 50 ounce bowl add 45 ounces of water and 5 ounces of white vinegar, this will be a 90/10 water to vinegar solution.

Step 2: Put your fruit or vegetables (or a combination of both) in this water and let it soak for 20 minutes, stir occasionally.

Step 3: Rinse your fruits and vegetables under the kitchen sink with water and enjoy!

When you’re not eating organic produce I definitely recommend washing it simply because of all the chemicals used in conventional growing are in your food and on the peel or skin of the food. Using this vinegar or hydrogen peroxide cleansing method will help to pull the fertilizers and pesticides from these foods and leave the residue in the bowl so that you do not ingest them. Even if you buy organic produce it’s still smart co clean your produce of residue and potential chemicals used.

White Distilled Organic vinegar contains acids and enzymes that help to eat away at and breakdown chemicals on or in produce. Hydrogen peroxide is a molecule with two parts hydrogen and two parts oxygen, it’s H2O2, one part different than water. The University of Minnesota also found that cleaning produce with distilled vinegar also kills more bacteria as well. Hydrogen peroxide works well to kill bacteria as well. You can also add food grade hydrogen peroxide to the apple cider vinegar or distilled vinegar bowl mix to do an even more effective job.