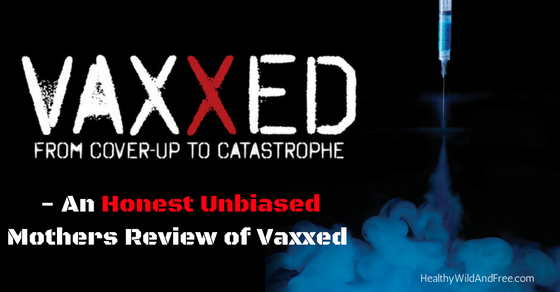 That is right, we will be discussing one of the most controversial health debate known to man right now, vaccines. The efficacy, safety and possible long term health issues of vaccines are all touchy topics for every parent. Over the recent years, parents, scientists, concerned citizens and politicians have formed together and joined forces to question these monopolizing, untouchable vaccine manufactures.

My Experience With Vaccines…

Before I review Vaxxed, I want to share my personal experience with vaccines and my medical background. I never questioned vaccines due to my background working as a CNA and home health aid. I was taught that vaccines save lives and are 100% safe and effective and they only caused mild side effects like pain near the injection site and fever. I actually remember extensively arguing with friends who warned me of the dangers of vaccines and shutting them down with “They cant make vaccines mandatory if they weren’t safe for everyone”. That all changed when I gave birth to a beautiful boy in 2012. I took all the steps to make sure my son would be healthy including being breastfed, having a natural birth and vaccinating him.

My son was vaccinated up until he was 8 months old. He received the Hep B vaccine, Pneumococcal vaccine and varicella and I was delaying the others until he was older and had a more developed immune system. 3 weeks after getting the pneumococcal vaccine my son started developing a cough and fever. We were sent home twice with a diagnosis of a virus and it would pass. My motherly instincts kicked in and I took him to the best emergency room in the area which was University of Michigan’s emergency room in Ann arbor. After trying to send us home with the same diagnosis, the doctor on call decided they would order a chest X-ray just to be safe. No more than 30 minutes later they came back with a diagnosis of Pneumonia. The very thing he was vaccinated against just weeks before.

That was my first red flag that something isn’t quite right. After treating my sons pneumonia he later developed asthma which was so bad that he needed a breathing machine and albuterol on hand at all times. My son later suffered with another bout of Pneumonia that left him hospitalized and chronically sick even after it was treated. Constant ear infections, rashes and colds seemed to be a weekly thing without any end in sight.

I was at my wits end and I knew something needed to change. I was not only dealing with the pain of seeing my son constantly ill, I wasn’t sleeping and was barley eating due to the stress of the situation. The one common denominator was vaccines due to the fact that he was still being breastfed and had not been introduced to foods yet that may affect his immune system.

After discontinuing vaccines, I saw my sons health do a 180. No more runny noses, no more pneumonia, no more eczema and amazingly no more asthma. I made this decision even before researching the ingredients in vaccines and the possible side effects because my sons health was going down hill so quickly. It was the best decision I ever made for my child and I absolutely regret not researching vaccines earlier and saving him from the 8 months of sickness he endured. My advice to any parent after experiencing what I did is to be informed and be aware of any drug or known carcinogens that are entering your child’s body.

My Review of Vaxxed

Firstly, lets clear a few things up about one of the creators of Vaxxed, Dr. Wakefield. His research has been widely criticized because of the inaccurate statements like “that doctor was convicted of fraud and sent to jail!”, “Wakefield admitted he made it all up,” or “he performed dangerous and unnecessary procedures on children.” All of these comments are untrue and were perpetuated by the media. Dr. Wakefield was a gastroenterologist who specialized in Crohn’s disease and ulcerative colitis at the Royal Free Hospital in London.

Contrary to popular belief, Vaxxed had very little to do with Andrew Wakefield. It focused more on a specific whistleblower named William Thompson and experienced physicians who are now questioning the efficacy and safety of vaccines. CDC Senior Scientist William Thompson has alleged that a 2004 study he co-authored omitted key data that would have revealed a link between autism and a commonly-required childhood vaccine, MMR (Measles, Mumps, Rubella). He stated “I regret that my coauthors and I omitted statistically significant information in our 2004 article published in the journal Pediatrics. The omitted data suggested that African American males who received the MMR vaccine before the age of 36 months were at an increased risk for autism. Thompson was directed to destroy all such research in an attempt to cover the findings during this study but he instead he kept the original documents and trials stating “….It was far too important to destroy”.

My primary job duties while working in the immunization safety branch from 2000 to 2006, were to later co-lead three major vaccine safety studies. The MADDSP, MMR autism cases control study was being carried out in response to the Wakefield-Lancet study that suggested an association between the MMR vaccine and an autism-like health outcome.

There were several major concerns among scientists and consumer advocates outside the CDC in the fall of 2000, regarding the execution of the Verstraeten Study. One of the important goals that was determined up front, in the spring of 2001, before any of these studies started, was to have all three protocols vetted outside the CDC prior to the start of the analyses so consumer advocates could not claim that we were presenting analyses that suited our own goals and biases.

We hypothesized that if we found statistically significant effects at either 18 or 36 month thresholds, we would conclude that vaccinating children early with MMR vaccine could lead to autism-like characteristics or features. We all met and finalized the study protocol and analysis plan. The goal was to not deviate from the analysis plan to avoid the debacle that occurred with the Verstraeten thimerosal study published in Pediatrics in 2003.

All the authors and I met and decided sometime between August and September 2002, not to report any race effects from the paper. Sometime soon after the meeting, we decided to exclude reporting any race effects.

The co-authors scheduled a meeting to destroy documents related to the study.

The remaining four co-authors all met and brought a big garbage can into the meeting room, and reviewed and went through all the hardcopy documents that we had thought we should discard, and put them into a huge garbage can.

However, because I assumed it was illegal and would violate both FOIA and DOJ requests, I kept hardcopies of all documents in my office, and I retain all associated computer files. I believe we intentionally withheld controversial findings from the final draft of the Pediatrics paper.

Dr. Frank DeStefano, CDC director of immunization safety, stands by the original article they submitted to the journal of pediatrics. Below is the Audio interview with Sharyl Attkisson from CBS News regarding the link between autism and vaccines and the data omitted from their study done in 2004. (Here is the link to the Written dialogue).

The film also included “The Doctors” star Rachael Ross who was a firm believer in vaccines and their safety. After reviewing the data that was omitted from the study done by the CDC, her exact words were “I feel like an ass”. She stated that doctors are “Blindly following with no real info”. Rachael Ross has had a ton of backlash for her opinions on the matter but the fact is that this is credible doctor who was once a firm believer in Vaccines and actually pushed them in routine appointments  but after after reading the documents omitted by the CDC in their 2004 study regarding the link between vaccines and autism has changed her perception on the matter.   Below is a video of Doctor Rachael Ross from “The Doctors” at the second annual health freedom rally and candlelight vigil for vaccine injured.

“The co-authors scheduled a meeting to destroy documents related to the study. The remaining four co-authors all met and brought a big garbage can into the meeting room, and reviewed and went through all the hardcopy documents that we had thought we should discard, and put them into a huge garbage can.”

Congressman Posey was present during a 2012 hearing with the CDC’s Coleen A. Boyle, who testified before a House committee that CDC data showed no link between vaccines and autism. He asked if there had been any studies done between the vaccinated vs. unvaccinated. Although Coleen Boyle danced around the issue of no such study ever being done, the answer was a big fat NO. Rep. Posey believes that the documents omitted are directly associated with the CDC’s refusal to conduct honest studies comparing the health outcomes of vaccinated versus unvaccinated individuals. You would think that they would be incredibly happy to do this study if vaccines are so incredibly safe and effective. The film also included many doctors and autism specialist who are questioning the efficacy and safety of vaccines. You will notice that most of these people are pro-vaccine but now question the link with autism after documents were discovered that in fact show that there is.

The downside of Vaxxed

Vaxxed unfortunately only discussed the link between autism and vaccines while they’re are a whole slew of other dangerous side effects caused by vaccines. They also really only covered the MMR vaccines when there are a slew of other vaccines with dangerous side effects. Side effects from multiple vaccines have been neurological disorders, encephalitis and acquiring an infection from the very thing they were vaccinated against are only a few. The movie failed to mention the fatalities caused by vaccines which was extremely saddening considering its an actual side effect. Below I’ve summed up a couple of adverse reactions that were not only reported to the CDC but can be found in the insert that comes with each vaccine.

There are far too many reaction to name but you can find the full list under adverse reactions via Merck’s (manufactures) website here.

If you Choose to Vaccinate ask these 8 questions…

Please visit a non profit charity, the National Vaccine Information Center (NVIC), if you have any more questions or concerns.

“What are the chances?” ,” As long as my child is safe, the 1% of children adversely affected is not worth the risk of not getting vaccinated”, “They must be safe if they are mandatory.” These are all things I’ve heard when debating about vaccines but I urge you to ask yourself, Does any of that matter if one child is being harmed?. If a humans quality of life can forever be affected by something that is mandatory, is that freedom of medical choice? We have focused so heavily on “its such a small percentage of people having serious adverse reactions”, that we fail to see that anything that is forced into our bodies SHOULD be 100% safe.

The vaccine debate may seem like it doesn’t affect you but in actuality it affects you greatly. We are actively handing over our rights to medical choice to the government without batting an eye. Today it’s vaccines but tomorrow it may be something that you greatly disagree with that will become mandated. Speak up, ask questions and weigh the pros and cons. You can certainly chose to vaccinate later on down the road but you an never take back vaccine injury.

To watch the film Vaxxed you can rent it for $3.99 here. Or, you can purchase the dvd for $15 here and pass it forward to friends and family to help spread awareness. I highly recommend watching it.