Here’s Proof That Susan G. Komen Could Care Less About Spreading The Truth About Cancer 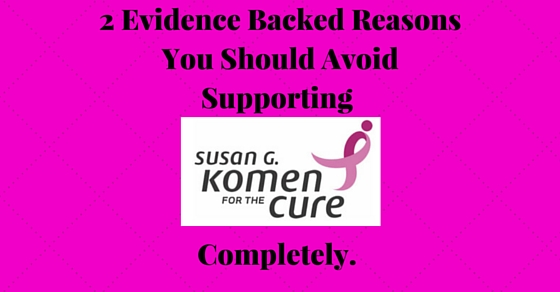 If you’re like me you believe that information is a good thing. People having access to more information through any means, whether it be a library or on the internet is a great thing. When it comes to the important things in life, your family, your health, your finances, it is even more important to have access to more information. Why? Well, if you were limited to a very limited set of information criteria when it came to your finances for example you may end up working your whole life to end up poor because you got ripped of by a corrupt financial “advisor” that took your money and ran.

I’ll get to the Susan G. Komen topic in a bit, but first you need to hear how information dissemination has been halted by financial interests.

Say for a minute we lived in a world where information was limited, the internet never existed and because of this you only had limited choices and options when it came to your finances, health, and family. This could harm you and your family. In fact, it most certainly will at some point. Say for example the internet was around when tobacco companies were falsifying science or simply flat out lying to the public about cigarettes. They told the public that these are safe, even healthy! More doctors smoke camel than any other! yet these cigarettes contained many toxic chemicals that were in fact carcinogens, cancer causing.

If the internet existed all it would take is one whistleblower to expose the tobacco industry and that would have spread like wildfire on social media, on blogs, youtube. The internet would be aware of this lie perpetuated in the public eye much faster. The internet simply speeds up communication, awareness and ultimately surfaces truth faster than ever before. This is great because there are many companies or organizations that work on behalf of companies that perpetuate “Tobacco Science” in order to further their agenda, typically selling something for a profit.

In this case cancer is the topic of discussion. In 2010 the national institutes of health estimated the overall cost of cancer was a whopping 263 BILLION. That’s one massive, extremely profitable industry. Numbers do not lie. Fast forward 5 years and that number has most likely only grown as cancer rates are on the rise. I wouldn’t be surprised if that number has topped 300 billion by now.

So what does this mean? It means that the cancer industry, specifically chemotherapy, radiation and surgery are extremely profitable. In fact, it was recently exposed that doctors are getting kickbacks for chemotherapy treatments around 6%, meaning if your treatment was $10,000 they got $600 back to them, and that’s just the kickback from “selling you the treatment” not other associated costs.

Because insurance can cover chemotherapy and radiation some Doctors have taken it to the extreme. People go to the doctor out of trust to ensure they are healthy and if they have a health condition or disease to potentially get advice or treatment. A Doctor in Michigan (less than an hour from where I live actually) was found guilty on multiple counts of medical and insurance fraud for falsely diagnosing patients with cancer and then prescribing chemotherapy.

This doctor forfeited 17.6 million dollars from medicare and private insurance companies. The shocking thing is that multiple employees at this doctors office quit and didn’t tell anyone how he was prescribing chemotherapy to patients up until the point of their death. No one did ANYTHING!!! They all just quit their job and went on with their own life. Meanwhile this doctor was prescribing chemotherapy that seriously harmed some and killed others. Finally, one brave person became a whistleblower and exposed him. I can’t even say he was brave, this seems obvious to expose him. He’s one guy, not a large corporation that will put a target on your back if you expose them. This was beyond belief for me.

Needless to say many believe that doctors may be doing the same. Diagnosing with cancer, or making the cancer seem to be worse than it is and having their patients go through multiple rounds of chemotherapy while they earn a kickback. This is truly sad, so if you’re diagnosed with cancer and the doctor tries to RUSH you into chemotherapy and doesn’t give you many options, avoid and get a second or third opinion. You’re better safe than sorry, or dead.

Back to Susan G. Komen. Recently Ty Bollinger hosted his Truth About Cancer series, it’s actually free to watch this weekend so go here and watch a few episodes if you still get a chance.  This series is an interview process with doctors, scientists and cancer survivors sharing their insights, stories and many different cancer treatment options.

The big hoax of the cancer industry is that chemotherapy, radiation and surgery are your only three options for cancer. That’s extremely limiting and narrow sighted. There are many many options and Ty’s mission is to give people awareness, information and options beyond these main three that make up the large majority of cancer treatment clinics and centers.

As someone who believes that information dissemination is a good thing, utilizing the internet to do so myself and to draw in on the collective intelligence, research and insight of those much smarter than myself I decided to share the Truth about cancer here on my blog and with the followers of Healthy Wild And Free.

I contacted Susan G. Komen to do the same, what is known as an organization to bring awareness to a cure and one to help cancer patients but my response wasn’t as aligned with what they promote their mission to be. 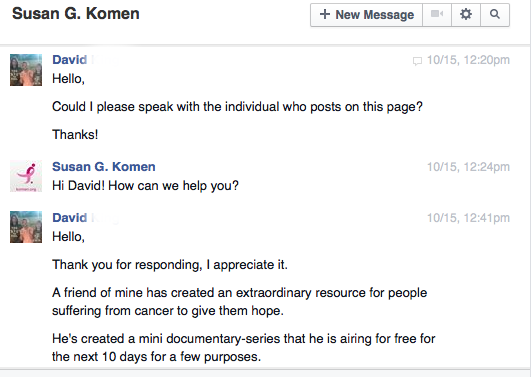 The rest of my message went on to say:

To inspire those who are suffering with cancer that there is hope (with survival stories) To encourage them to not give up the fight (by interviewing cutting edge doctors and scientists to share how progress is being made.

It’s an important project and has gained massive traction in the first few days with already almost 500,000 views on the trailer promoting it on youtube. Many health bloggers, doctors (including Dr. mercola, among others) are involved in the project in one way or another.

I figured i’d reach out to an important organization to see if you could support it.

The link to the series is here: http://bit.ly/cancertruthseries

Please let me know this is something you can share to inspire and encourage.

P.S. My mom is a stage 4 cancer survivor so I feel these kind of survivor stories and interviews are so important to give people hope.

What was the result of this? 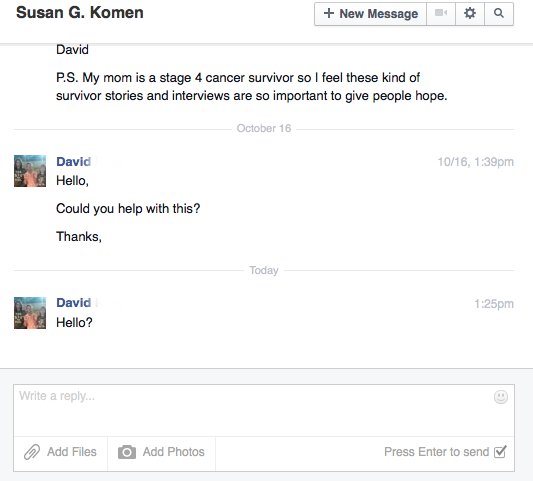 Basically Susan G. Komen said “how can we help you?” and when I shared how they can help cancer survivors, patients etc etc… They ignored my request and didn’t even have the decency to respond.

If this organization truly wanted to help people prevent cancer, find a cure, alternative treatment options, and last but not least actual cancer patients they would have looked into it. Susan G. Komen is a huge organization with around 300 million dollars a year in donations. You can read their financial statements at: http://ww5.komen.org/AboutUs/FinancialInformation.html

Beyond this do more research, as far as cancer organizations are concerned they are just about as bad as it get’s. 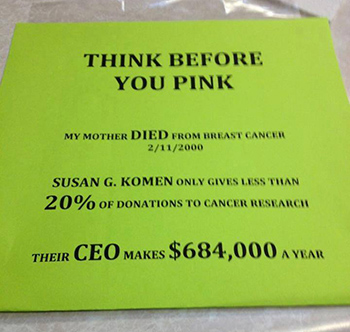 This organization does not support treating or curing cancer much at all. If they cared they would have at LEAST responded to my message, looked into it for themselves and considered spreading the free information. Their lack of response and financial statements don’t lie. There’s a reason many people are saying “Think before you pink” and throwing terms like pinkwashing (companies that sell products with carcinogens listed as ingredients yet support pink/cancer organizations) around.

Make the best choice, donate to organizations that actually deserve it. The truth about cancer will come out and prevail. People will become aware of these organizations that bring in hundreds of millions a year and don’t care nearly as much about a cure or giving people who are dying more than a few options to spend their life savings before they croak.

Please let people know that Susan G. Komen is not an organization worth investing money into. Please do more research for yourself also, i’m not the only one who has looked over the companies financial statements and reached out to them personally and gotten no response.