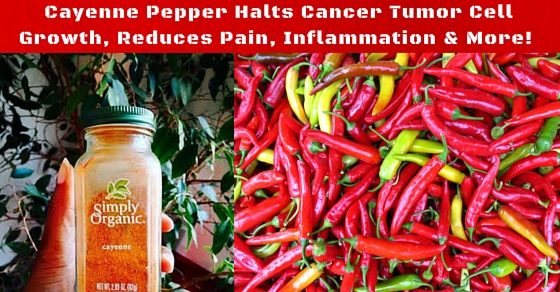 Many people know the benefits of cayenne pepper but a smaller percentage of people know why cayenne pepper is so beneficial. One of the most beneficial and most active compounds in cayenne pepper is known as capsaicin. It’s an extraordinary compound with many health benefits, some of which may even sound too good to be true. Native Americans have known and used cayenne as both food and medicine for 9,000 years!

Capsaicin is an active compound in chili peppers, cayenne pepper, habanero peppers and jalapeno peppers among others. Some of the benefits discussed around cayenne can also be applied to these foods also because of their capsaicin content.

Cayenne Benefits Your Health in These Ways

First and foremost, one of the most valuable aspects of cayenne pepper is that it kills cancer tumor cells by inducing apoptosis, which is programmed cell death. In the case of cancer cells growing out of control a healthy apoptosis cycle is a good thing to keep cancer cells dying off faster than they reproduce and grow the tumor.

The authors of one study reported that capsaicin induced apoptosis in cultured cells derived from human cutaneous squamous cell carcinoma. This occurs through inhibition of mitochondrial respiration.

Beyond this it also reduces pain by increasing circulation within the body. It does this by boosting nitric oxide, a molecular gas responsible for circulatory function. In a study with lab rats they found that nitric oxide released from parasympathetic nerves and neuropeptide(s) released. This increased the Cerebral blood flow (CBF, blood flow to the brain) in the rat. Arterial blood flow was also increased. Essentially the entire body had enhanced circulatory function from boosted nitric oxide levels that came as a result of capsaicin introduced into the rat’s bloodstream.

Capsaicin also helps the body deal with and reduce pain. Improved circulation function is beneficial for reducing any pain in the body, such as in muscles, joints, even pain associated from the side effects of chemotherapy.

According to the University of Maryland Medical Center capsaicin is beneficial to apply topically to the skin because it helps suppress a chemical messenger known as substance P to the brain which gives your body relief. They say this can be applied topically to reduce arthritis pain, fibromyalgia, nerve pain, shingles, lower back pain and pain associated from recovering from surgery. The benefits of capsaicin work internally as well as externally, in a future article or video I will share how you can benefit from capsaicin topically and how to go about this process.

Capsaicin has also been found to promote healthy hair growth. In one study mice were given capsaicin along with soy isoflavones and their hair grew quicker and healthier. In humans 64.5% of people had significant hair growth increases.

Cayenne pepper (and capsaicin) also promote a healthy and active metabolism as well as suppressing appetite. It helps create healthy weight loss by heating up the body to burn calories for fuel and this burns fat. It’s a warming compound, so this spice is great during the winter months to keep the digestive fire and metabolism burning efficiently.