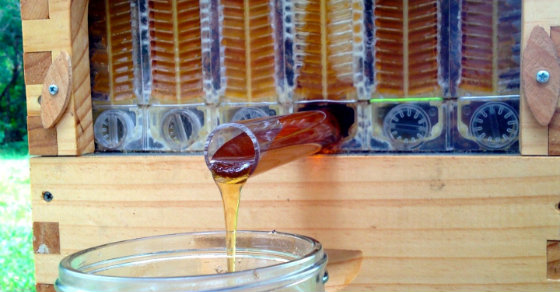 Bee’s may bug you, you get stung every once in a while and want to avoid them at all costs, but they play a large and very vital role in our ecosystem and ultimately in the survival of the human race. Bee’s pollinate approximately 100 crops and when bee’s die these 100 crops die with them. We need bee’s to play their role in our ecosystem and function the way they are wired too, and that is to pollinate.

Without bee’s foods like apples, almonds, blueberries, cherries, avocado’s, cucumbers, onions, grapefruit, oranges and onions would disappear… should I keep going? there’s about 90 other foods on that ‘never be able to eat these foods again’ list. Unfortunately because of biotechnology companies such as Monsanto bee’s are dying at an alarming rate. It’s known as colony collapse disorder. Since 1990 more than 25% of the honey bee population has died. There are 25% less honey bees (and growing) in our world today in our very lifetimes. At this rate by the time we die bee’s could be almost or completely gone. That’s scary, they play such an important role in our entire ecosystem and especially in the production of food that we eat.

(side note: biotechnology? sounds so ecological and wholesome! what is this branding BS!!?)

This is why we really need to eat organic and stop supporting monoculture and GMO foods produced by Monsanto. It’s important for our health, ecosystem and survival at large long-term. In fact, do you know what our grocery store shelves would look like without bee’s? Take a look at this graphic from mother nature network: 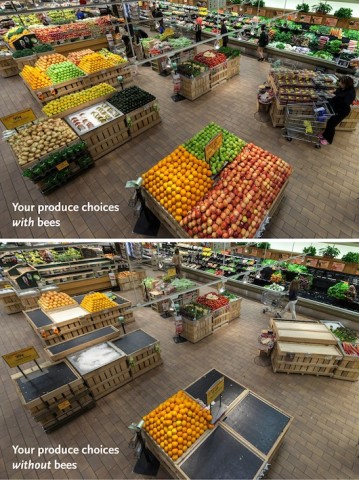 Enter Flowhive, an innovative company that plans to bring something to the market that will forever change bee’s environment. First things first though, it’s important to understand the value that beekeepers (also known as an apiculturist) add to the lives of bee’s. There is much confusion around this and unfortunately some group of extreme vegans continue to spread misinformation regarding this issue. Beekeepers are very important and valuable to the lives of bee’s because bee hives provide a place for bees to flap their wings and release moisture to continue pollinating. Bee hives essentially keep bees more active and give them a place to recalibrate their wings. Hives allow bees to pollinate more often with more ease.  There are beehives in nature and beehives made by humans, the beehives in nature take a lot of work and the beehives made by humans just allow bees to pollinate without building an entire beehive a home for them, basically.

Until now though beekeeping has been a tough job. It takes a lot of upfront cost from equipment to wear along with the beehive trays and everything that goes into it, not to mention the many hours of work to support the bees and keep the hive going. Thankfully, that’s all about to change. Flowhive is a company that is changing the way we can ‘beekeep’ to make it easier than ever before. They created a beehive designed to be architecturally brilliant! The honey flows from the hive and then once removed from the tap creates more space for more honey. Take a look at this video to learn how this works:

Quite incredible huh? You can learn more about flowhive on facebook here or on their website here: HoneyFlow.com To learn more about beekeeping, how to maintain a hive and the importance of bee’s in our environment check these books out on amazon.