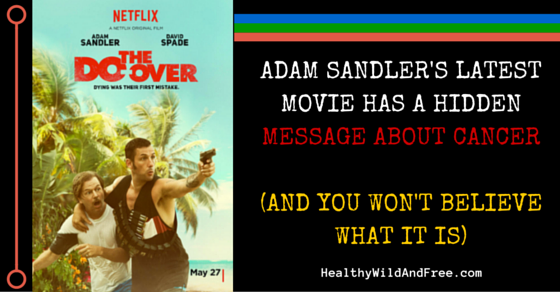 There’s a new movie on netflix starring Adam Sandler and David Spade and by the looks of the trailer it’s just another comedy action flick to watch when you want a few laughs and a little vicarious adventure through your tv screen. I saw the trailer on netflix one night and when it became available to watch on netflix I figured why not, the trailer looked good and laughter is great for health and I sure enjoy it so why not.

As I started watching the movie I realized it was presented a little differently in the trailer than I thought it would be as I began to watch the film. The story follows Adam Sandler (Max, in the film) and David Spade (Charlie, in the film) on a wild adventure as they escape their “old lives” while a new life begins to haunt them.

In the film, Adam Sandler’s character is diagnosed with cancer and searching for the cure while David Spade follows along unknowingly until the shit really hits the fan. They realize what’s really going on in the cancer industry and this cure that Adam Sandler discovered was gone missing because the researchers who discovered the cure for cancer were murdered.

Adam Sandler (Max) and David Spade (Charlie) then go on a wild goose chase to search out the cure so that Adam Sandler’s life can be saved.

At one point in the film Adam Sandler is talking with a researcher and asking “Why would they want to bury this cure? It’s worth millions or billions of dollars.” To which the researcher replied “This cure getting out there would cause them to lose TRILLIONS of dollars.”

How much truth is in that statement? A LOT. Natural cures and treatments for cancer are all over the internet but you’ll never hear the Government, medical organizations or corporations admit any validity to any of them outside of chemotherapy, radiation or surgery. These are the bread and butter monetary sources for the cancer industry, and yes, it is a massive industry. It’s an annual $125 Billion dollar industry and growing year over year.

Interestingly enough, most films are full of propaganda that make fun of or ostracize cures or natural treatments. Not this film though, this film hit the nail on the head. Just take a look at how and why doctors and researchers in Florida have gone missing (been murdered) on a large scale recently. They all have one thing in common, they were researching a cure for cancer known as GcMaf. You can read the full story and learn about the deaths in the past year by following this article, just click here.

For once in Hollywood there is some surprising truth in a film green lighted to share some truth on the map of the consciousness of the United States citizens that have been lied to for so long.

You can view the trailer here, I highly recommend watching it next time you binge on netflix!