7 Backed Reasons Why Processed Meat is an Early Death Sentence 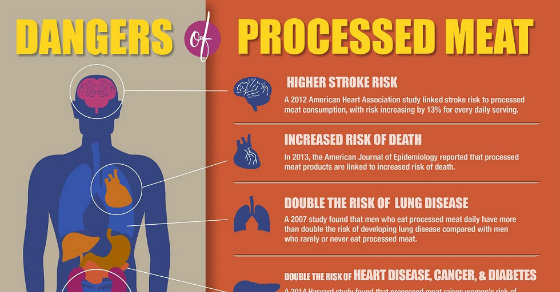 Our world is full of processed meat. The majority of meat is processed to such a high degree that meat now looks absolutely nothing like meat just 50 short years ago. The “meat” at fast food restaurants is the most processed. Much of this “meat” is full of preservatives, antibiotics, steroids and fillers to dilute the meat and cheapen the price. I saw a commercial the other day on tv for 10 chicken nuggets from burger king for $1.49. Think about that for a minute, less than a buck fifty for 10 “chicken nuggets”? really? think about the chickens being raised, slaughtered, processed, packaged, stored, shipped, prepared (heated up) and served by the burger king employee for 1.49.

How does food, especially meat become that cheap? it can’t be, unless it’s processed to such a high extend that it can be profitable. You have to think, for $1.49 not only are there all those costs but burger king has to profit also. How can a chicken live, be slaughtered, processed, packaged, shipped, then prepared at a burger king, served by a burger king employee… 10 nuggets for $1.49!

Obviously there has to be profit in there also, so all the people involved, the processing, packaging, shipping and serving costs quite a bit. Chicken nuggets (and other meats) are processed to such a high degree that they no longer look like food. Meat in general is not what meat was 50 years ago.

Processed meat is mainly what you see everywhere in supermarkets, grocery stores, restaurants, or anywhere else that serves meat. Processed meat has it’s own health risks that cannot be ignored, if you choose to partake your health is at risk every single time and continues to be harmed by this processed so called food.

So processed meat has negative aspects obviously and meat is much more processed and toxic than ever before. Meat is seen as a business and a profitable one at that. What effect does eating processed meat have on our health though? What does the preservatives, dyes, chemicals and fillers in the meat do to our health if we choose to partake in eating it long term?

Well, it’s not pretty, it’s not even attractive at all. Processed meat consumption has the following effects on the health of a human being:

The lesson? avoid processed meat. The worst processed meat is obviously going to come from fast food sources. That burger or hot dog, those chicken nuggets, these are the absolute worst and should be avoided at all cost. The meat that you get at your grocery store isn’t much better than the meat from a local fast food joint or restaurant. These animals are still pumped with antibiotics and fed GMO feed.

Eating less processed meat lowers your risk of developing many deadly diseases as well as increases your life of quality today. If you can’t quite eating processed meat completely at LEAST cut it down drastically. Eat less, avoid fast food completely and make that little improvement.