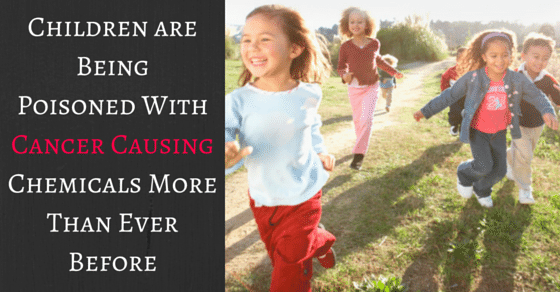 According to the CDC the second leading cause of death in children and adolescents is Cancer. From 2012 to 2014 cancer among children rose a whopping 10% and in 2030 is expected to be the number one cause of death in Americans both young and old. We can attribute this to genetics or, as this article will show you, it may simply be lifestyle factors that have changed over the years.

Vaccinations seems like a routine procedure for your children but few know what’s actually in them and the possible side effects. If your doctor is recommending them and school and daycares require them then why question their effectiveness. Right? Personally I like to know if something injected into my body might be potentially dangerous. Vaccinations have been proven to be contaminated, like the Polio vaccine that was responsible for up to half of the 55,000 non-Hodgkin’s lymphoma cases in 2002. Another example is Gardasil, originally created to protect against cervical cancer but is responsible for a 45% increase in the risk of forming cancerous lesions. Why question what’s being injected into our children’s bodies?

If what’s being introduced into your child’s body is left up to corporations and pharmaceutical interests then how can you know as an educated parent what is more important? The health of your children or their bottom line?

Mercury is a known additive in Vaccinations. It has been used as a preservative for vaccinations since the 1930’s and although the CDC has issued public statements saying mercury hasn’t been used since 2012, evidence shows that in 2014 some vaccines including the flu shot still  contain 100 times higher than the highest level of mercury in contaminated fish. Mercury has been known to cause birth defects, abnormal brain development and sometimes autism but yet and still vaccinations are pushed as if its 100% safe and effective.

Aluminum and Sodium Deoxycholate have both been found in flu shots as of 2014. 25 mcg of formaldehyde (a neurotoxin) and up to 50 mcg of sodium Deoxycholate. Aluminum, a toxic metal, has been linked to many degenerative brain diseases such as Alzheimer’s and Dementia. Sodium Deoxycholate is shown to weaken the blood-brain-barrier and activate seizures.

Some may believe that the risks of having your child vaccinated outweigh the actual long term effects that these toxic metals and chemicals may have. We stopped relying on our immune system and started putting full faith in Vaccination manufactures making billions of dollars testing known carcinogens on our children. As parents we must be aware and alert but most importantly, take a step back and question.

What is sodium nitrate?

Sodium Nitrate is used for preserving processed meats. It helps avoid bacterial growth and aids with flavoring and the color of the meat. You can find sodium nitrate in bacon, ham, turkey, hot dogs, lunchables and canned soups with meats.

Why is sodium nitrate bad?

Sodium Nitrate is toxic for all of us but it’s more dangerous to children because their bodies process it faster. While in the digestive track it converts into carcinogenic nitrosamines, which are known cancer agents. Sodium nitrate has been linked to increased risks for colon cancer, stomach cancer and pancreatic cancer.

It’s said that pregnant women who eat a lot of processed meat give birth to babies who will have an increased risk of brain tumors as children.

In today’s world, we have become accustomed to faster, easier and cheaper foods but the outcome may be detrimental to our kids health in the future. Taking that extra 30-45 min a day to prepare a home cooked meal without sodium nitrate  or other processed foods is one step closer to keeping cancer out of our homes.

When we go to the store to shop for household, beauty or baby products sometimes its like walking into a minefield full of far too many options. We try and weed them out by effectiveness, price and sometimes even smell but are we weeding them out by potentially cancerous chemicals? Lets take a look at some of these products we should absolutely avoid and why.

These three chemicals are hormone-disrupting chemicals that can form cancer-causing agents. These are linked to liver and kidney cancer. Commonly found in shampoos, soaps, bubble baths, and facial cleansers.

Banned by the European Union in 2003, phthalates and parabens are a group of chemicals commonly used as preservatives in cosmetics and pharmaceuticals. They keep hairsprays sticky and bacteria and fungus out of things like nail polish and perfume. These are known carcinogens linked to breast cancer. Commonly found in nail polish, aerosol sprays, shampoos and much more.

“Fragrance” is a euphemism for nearly 4,000 different ingredients. Most “fragrances” are synthetic and are either cancer-causing or otherwise toxic. Exposure to fragrances has been shown to affect the central nervous system. “Fragrances” are found in most shampoos, deodorants, sunscreens, skincare and body care products.

Isopropyl Alcohol is used in hair color rinses, body rubs, hand lotion, and aftershave lotions as well as in your car’s antifreeze and shellac! Scientists believe that it has the ability to destroy intestinal flora, leaving the body’s major organs open to parasites, and thus to cancers. Beyond attacking the intestinal flora, isopropyl alcohol can cause headaches, dizziness, mental depression, nausea, vomiting, and coma.

Mineral oil is a petroleum derivative that coats the skin like Saran Wrap, which prevents the skin from breathing, absorbing, and excreting. It also slows the skin’s natural cell development, causing the skin to age prematurely. Note that baby oil is 100% mineral oil—and 100% bad for your baby’s sensitive skin.

Propylene Glycol is the active ingredient in antifreeze. It is also used in makeup, toothpaste, and deodorant. Stick deodorants have a higher concentration of PG than is allowed for most industrial use! Direct contact can cause brain, liver, and kidney abnormalities. The EPA requires workers to wear protective gloves, clothing, and goggles when working with it. And yet, the FDA says we can put it in our mouths!

Sodium Lauryl Sulfate and Sodium Laureth Sulfate are the most toxic ingredients on this list. When used in combination with other chemicals, they can form nitrosamines, a deadly class of carcinogen. They are used to clean engines, garage floors, and at car washes. AND this is still the most popular ingredients for makeup, shampoo and conditioner, and toothpaste. Exposure causes eye damage, depression, diarrhea, and many other ailments.

Triclosan is synthetic antibacterial ingredient used in soaps and disinfectant gels that has been compared to Agent Orange. The Environmental Protection Agency registers it as a pesticide, highly toxic to any living organism. It is also classified as a chlorophenol. In other words, it is in a cancer-causing chemical class. Triclosan disrupts hormones, can affect sexual function and fertility, and may foster birth defects. Triclosan has been linked to paralysis, suppression of the immune system, brain hemorrhages, and heart problems. It is widely used in antibacterial cleansers, toothpaste, and household products.

Talc has been linked to ovarian and testicular cancer. It can be found in makeup, kids and adult powders, and foundation.

Petrolatum is a petrochemical that contains two well-known carcinogens: Benzo-A-Pyrene and Benzo-B-Fluroanthene. As you might imagine from a petroleum derivative, petrolatum prevents the skin from breathing and excreting.

These are only a few and some research must be done on your part but we, as parents, need to be committed to choosing safe personal care products. It may seem tedious but there are so many healthy, reasonably priced alternatives that could literally be the turning point of yours and your child’s health.

“Make sure you get that cavity filled before it causes more issues” or “It’s a simple procedure that will keep the rest of your teeth healthy” are things we hear when a tooth has gone “bad” so to speak. A filling seems like a normal procedure considering nearly everyone has one but the main ingredient is not so normal or routine. We’ve read about it in light bulbs and even briefly in this article regarding vaccines but as some of you may have it in your bloodstream via an Amalgam filling. 72% of those surveyed in the US did not know that silver fillings contain mercury. Why is a filing lined with Mercury bad? Lets see what it is and how harmful it is firstly.

Mercury is a powerful neurotoxin and, at certain levels, can cause neurological issues, autoimmune disease, chronic illnesses and mental disorders. Unfortunately, fillings helps this neurotoxin secrete into your bloodstream DAILY. That means you may have a continuous exposure of up to 27 micrograms a day and if you chew gum, drink carbonated beverages or grind your teeth your may be secreting 5x more into your blood stream.

The great thing about Amalgam fillings is that they are removable and Porcelain fillings are certainly a healthier alternative. Do your research because conventional removal may cause mercury vapor to be released in the process which then enters your body. Do some research and find a holistic dentist that can specialize in this. Its an easy solution to ongoing health issues you may be experiencing but you must be proactive and ask questions.

Your health and your children’s health is not negotiable. Keep it out of large corporations hands that will push whatever procedure, drug or preservative that might save them a buck but cost somewhere their life.