This $3.8 Billion Oil Pipeline From North Dakota To Illinois Needs To Be Stopped 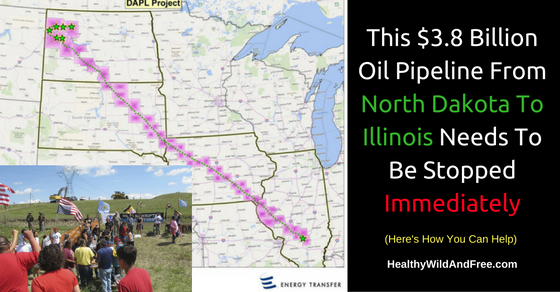 There’s an oil pipeline project in the works that will cost $3.8 billion to complete, if completed. It may not last though. A native american tribe (The Sioux tribe, mainly) are protesting it’s completion. Many other tribes and American citizens (including famous stars such as Shailene Woodley) are joining in the fight in person and in social media. It crosses through four states but borders several more as you can see below… 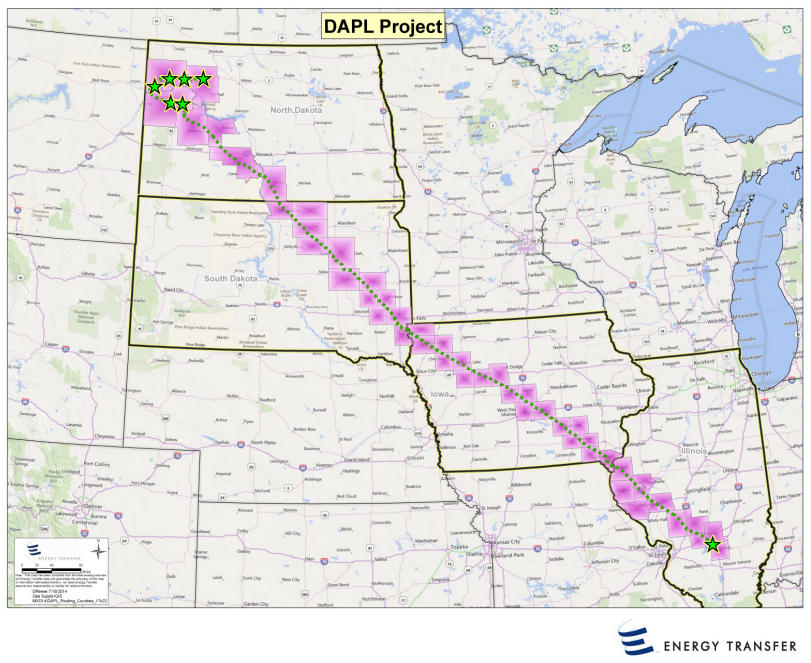 The facts aren’t fully on the table yet so i’m going to lay the full story out in it’s truest entirety so you can see this picture clearly for what it is.

The company creating this pipeline is Endbridge Inc. A $25 Billion dollar Canadian company with it’s CEO (Al Monaco) earning $12.1 Million dollars a year. That’s completely irrelevant other than to say that he earns a lot more money than all of us, or at least most of us. That’s fine with me, I don’t care if you earn $100 million a year as long as you do it in a just and ethical manner.

Endbridge Inc. and the $3.8 billion dollar oil pipeline project however, does not. They have a history and a track record of mistakes and malpractice when it comes to the transportation of oil, safety and efficacy.

One little fact that most people do not know is that Enbridge Inc. is responsible for the largest inland oil spill in America, and it happend just a few hours from my home. Endbridge had a piepline that spilled into the Kalamazoo river in Kalamazoo Michigan. This pipeline caused so much damage with this inland spill of up to 1,000,000 (yep, that’s million gallons) of oil that they had to pay $767 million dollars to clean it up. Not only that, but they’re still paying for their 2010 spill up until 2015. Another $4 million was paid out just last year. It’s ongoing and worse than it appeared to be. The company also took 20 hours to RESPOND to this spill! To respond? That should take 5 minutes, an hour tops if the phone lines are down. There is simply no excuse for their negligence and carelessness.

The U.S. National Transportation Safety Board report investigating the Canadian energy company Enbridge’s Kalamazoo Michigan spill called it an episode of the Keystone Cops. Even the Government saw it was that bad. The largest inland oil spill wasn’t publicized nearly enough and it happend in my state, in many Michigaders backyards.

This alone should be frustrating to you. The negligence demonstrated by the company was the reason for the largest inland oil spill in America, in MY state. Pure Michigan. That story may shock you, but unfortunately the story gets even worse.

This company, Endbridge Inc. (Stock ticker: ENB, Please sell if you own it) has delayed in updating an oil pipeline that runs from Wisconsin all the way to Canada through the straits of Mackinac. This 645 mile pipeline ran under water and was built on 1950’s welding technology. Over time, many decades they had not updated the welds AT ALL and many organizations including the national wildlife foundation did studies showing that these pipes were overdue for fixes and the entire great lakes were at risk. Unfortunately, the government in Michigan didn’t help as much as they could have. They could have lit more of a fire under Endbridge’s ass to get things moving. It wasn’t until this year (2016) that Endbridge finally inspected line 5 under Mackinac bridge. You can see the news on that here.

The problem though, is that the bridge is 63 years old. One spill could literally destroy Lake Huron and Lake Michigan forever. They run 540,000 gallons of oil per day through this pipeline. If they took 20 hours to respond again, the disaster would be one of the worst environmental events in our entire lives. This is freshwater folks, even more precious than saltwater.

You can read more about Line 5 that runs through the Mackinac straits from Wisconsin to Canada in this article here. This is still an issue to this day with no real resolution surfacing.

Fast forward to present day, only a few months later from this debate and the same company is looking to build an oil pipeline from North Dakota all the way to Illinois. This $3.8 billion dollar pipeline runs through you guessed it… water! Water sources.

By now you should hopefully have bought into the fact that Endbridge Inc. has a bad track record and their pipelines running through water and have a track record for not being responsible in maintaining their pipelines. The largest inland oil spill in U.S. history in Michigan. The pipeline in the Mackinac straits not maintained and up to complete safe and secure standards.

You can take a look at the protest now and how out of control it’s gotten. Endbridge has resorted to hiring security and releasing dogs on protestors. People from these silent organizations have also attacked Native tribe members, hitting, tackling and spraying pepper spray on them. You can see the full-video here which has gone viral on facebook with over 1 million views today alone.

The pipeline is planned to cross North Dakota, South Dakota, Iowa and Illinois. The pipeline borders several other states though so if it did break in any regard it could effect 6 or 7 states easily. This is not a project that we should allow a company with a negligent track record to take part in.

Please help with these efforts. Show your support by spreading the word, visiting to protest in person…. and please, if you own Endbridge Inc. (ENB) stock, please sell it and do not support them financially. This tribe is simply fighting for clean water and for preventing an environmental disaster. I personally stand with them and hope you do also.

Keep up the good fight for those who are in it, We are with you! Live Healthy, Wild & Free.