25% Of American Women in Their 40’s And 50’s Are On An Antidepressant, Here’s What You Need To Know 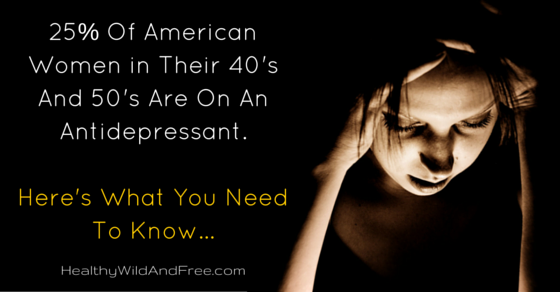 10% of the American population takes an antidepressant with a staggering 1 in 4 women in their 40’s and 50’s on one. This number has only increased in recent years, but why is that? why are so many people feeling depressed and disconnected from their usual selves? What’s causing this epidemic? Many different things could be blamed or play a role. One of the main one’s being that doctors prescribe more antidepressants now than ever before. How can humanity become so depressed at an alarming rate? Could I be the only one that thinks that maybe the rise in depression could be directly correlated to the rise in antidepressants partially at least? Antidepressants have been on the rise and so have depression. I’ve watched a few documentaries on antidepressants and drugs that influence the mind and these patients seem to be worse off after the drug than before.

Depression is On The Rise, But Why?

There’s no doubt that depression has been on the rise. One study found that people had many more signs of depression than in the 1980’s such as trouble sleeping, and concentrating. So depression is on the rise, why? what could be causing this? could technology be inducing more stress which induces more depression and distraction? That’s actually part of the reason.

One study in Sweden found that the more technology use causes more sleep issues and disorders, stress, mental anxiety and depression. Not only are those effects valid but one factor the study ignored is that technology also produces more electro-magnetic frequencies and dirty electricity and we’ve become surrounded by it, in our homes, at work, everywhere. Dirty electricity and EMF’s cause our body to be more stressed and off balance. Technology use, the more used, especially cell phone and screen use at night is one cause of depression.

Diet And Depression Linked As Well

Our diets are to blame as well. The sales of fast food, processed food and foods that contain chemical additives and dye’s that effect the brain have only been on the rise. There are so many things effecting our brain chemistry now that weren’t 20, 30 or 50 years ago. The very simple switch to eating more fruits and vegetables helps someone with depression. Foods like fruits specifically (such as oranges, pineapples, bananas, nuts and seeds can influence serotonin) which helps you feel happier. If you don’t have foods in your diet that influence brain chemistry, your dopamine, serotonin, your brain chemistry will suffer. Bananas, lemons, pineapples and vitamin C rich fruits seem to be some of the best foods to combat depression.

Could Being Inactive And Indoors Lead To Depression?

We’re more disconnected from nature now more than ever as well. The simple act of being in nature is exceptionally valuable for the mind and combating depression. Nature, fresh air, sunshine (for boosting the happy hormone, the neurotransmitter known as serotonin) is all great for the mind to be healthy and balanced. You may feel boxed in sometimes if you are indoors to much, this causes more mind chatter. Getting outside in nature lets your thoughts and feelings flow freely and get’s your mind in a better state. On top of this, being outside and getting exercise is one of the the absolute best ways to combat depression. The University of Toronto compiled 26 years of data and found that simply participating in 20-30 minutes per day of exercise can prevent depression, or help reverse it.

So what is to blame then? lack of exercise? Yep! Lack of time outside in nature getting sunshine? yep, Poor diet? Yep. Addiction to technology and screens, especially late night? Yep! Any of these could be part of the blame. For you individually it could be and probably is a combination of the above factors.

Let’s dig a bit deeper though for a minute. The above factors do play a role, yes, and they are very important. They are just the mental and physical factors though. Let’s address the spiritual factor for a minute. I can personally say from experience that i’ve been through some very difficult times in my life and have dealt with my own isolation, loneliness, depression. I can say from firsthand experience that we make it harder on ourselves by not reaching out to friends and family and saying “hey, i’m going through a hard time” and letting them know.

You are not alone, no one ever is, but we can often isolate ourselves to be and feel alone because we’re so hurt or saddened from an experience. One of the things that i’ve done (and I know others have as well) that has hindered my mental health and happiness is giving myself conditional happiness based upon an external factor. I’ll give you an example… “I’ll be happy (when/if) this relationship works out.” You work really hard, you fight for what you believe in. You try to “earn” or “reward” yourself with happiness, love and appreciation, but it just doesn’t work like that.

Whether the relationship worked out or not, or that job worked out or not, or your son or daughter chose to go in the direction you steered them, whatever the condition is really doesn’t matter. If you put conditions on your happiness, you will always have trouble being happy. No antidepressant, amount of sunshine, healthy diet or exercise will help you. I highly recommend you take a deep look at your life and ask yourself “Am I waiting to be happy until xyz?” or no? If you create conditions on your happiness then you’ll continue to do this over and over again and never be happy. Just remember this, If your happiness is conditional your depression is also. You just have to find those conditions for each, remove the conditions blocking you from happiness and remove the conditions you’ve been using (knowingly or unknowingly) that have been causing you depression.

With this being said, what I found interesting is that women in their 40’s and 50’s are the highest percentage group of people on antidepressants. Why is that? I found a correlating statistic that may connect in a documentary called “The Shift” from Wayne Dyer. He talked about how women in their 40’s and 50’s have a shift in priorities in what they value in life, so this could be a difficulty in transitioning and shifting priorities and truly understanding that. Our definition of happiness changes over time, if we continue doing something that once made us happy but no longer does we will end up feeling unfulfilled and confused, depressed. Make sure to watch the film “The Shift” from Wayne Dyer, it’s an incredibly valuable film for anyone, but especially women in their 40’s and 50’s going through a shift themselves.

We know there are multiple factors that cause depression and anxiety, everything from diet, technology, time outside in sunshine to exercise. The physical and mental aspects play a strong role, but spiritually if your spirit is waiting to be happy conditioned on external factors that may or may not happen, that’s something you need to address yourself.

Antidepressants are scary business. I’ve heard many horror stories. As far as drugs are concerned they are some of the worst pharmaceuticals to ingest. They influence brain chemistry in a way that can and often does cause more problems both psychologically and physically. Just take a brief look at the downsides.

Antidepressants And Their Side Effects:

These are just the side effects listed by WebMD.com, the real truth is that thoughts of suicide and many other odd mental conditions are side effects as well. If you do your research you’ll find that many of the school shootings have involved an adolescent on antidepressants, if not all of them. Antidepressants have made people go crazy. Teenage girls have committed suicide in their closet while on antidepressants. The stories go on and on, the list above is simply the ‘light’ side effects, and they’re still horrible. I’m not sharing these things with you to scare you, i’m sharing them with you to let you know that on an antidepressant your mind simply is not the same.

If you can muster up the courage to go outside for a walk in the sunshine and fresh air, eat a little healthier, watch some comedy, connect with friends and family, be brave enough to address underlying emotions and pain that you’ve been choosing to hold onto and finally let it go, maybe you can start letting go of all that pain and sadness and start embracing that true you again. Getting back to the happy, true version of yourself takes work and commitment but that antidepressant simply won’t get you there. Take the bold risk of doing little things each day to improve just a little bit and in a few months or a year from now you’ll look back and say “I’m sure glad I did that” and be off that antidepressant, and much happier, on a path that suits your well-being for good. If you need any encouragement or support, or a different perspective to help you break free from old thought patterns I am here for you and would love to encourage you, so just shoot me a message on facebook here.

Recommended Reading: How To Boost Serotonin in 7 Ways (The Happy Hormone)