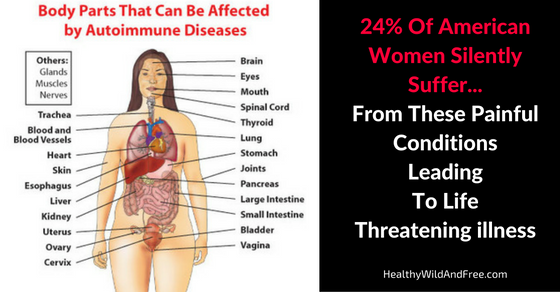 I recently attended a health conference near Atlanta, Georgia. One of the keynote speakers Dr. Tom O’bryan was speaking on the topic of autoimmune disease. I didn’t expect to learn anything substantially important in his talk because up until that time I thought autoimmune disease maybe effected 1 in 100 or 1 in 200 people. Turns out I was quite wrong. 17% of the American population suffers from autoimmune disease in one form or another.

75% of people who suffer from autoimmune diseases are women. So the 17% is a general number across the entire population but 24% of women are directly effected. That’s almost 1 out of 4 women in America.

50 Million Americans suffer from approximately 160 diagnosable diseases listed here by the American Autoimmune Related Diseases Association (AARDA), I may be one of two off on that number because it’s big and counting is a process in and of itself.

Autoimmune disease occurs when the gut has an inflammatory response to something that knocks the homeostasis off course. This could be anything that disrupts the balance. Allergies including hidden allergens, infections, environmental toxins, foods or drinks that are inflammatory and stress are causes of inflammatory related conditions.

If we continue to put our body and gut into a pro-inflammatory state either knowingly or unknowingly it will only continue. How do you know what causes inflammation in your gut? That’s an important factor. Really, the truth is that for everyone it’s different.

If I eat a food I may be fine with it but if you eat it your gut have an inflammatory response. Specific foods and drinks effect everyone differently. At the same time we do know and now have statistical data that suggests that certain factors such as specific foods, drinks, allergens and other factors can spark inflammation in the majority of people.

With that knowledge we can at least make progress, if not go a long way…

Chronic systemic inflammation (SI) is the result of release of pro-inflammatory cytokines from immune-related cells and the activation of the immune system.

Your gut environment, such as your diet, stress, ingestion of chemicals knowing or unknowingly is what stirs this into motion.

Removing the culprits is key. The body is doing it’s job by responding with inflammation. Inflammation is a barrier the body gives specific areas in order to assess the damage and begin to repair. It’s a good and necessary thing.

If you stop giving your body the factors that cause the inflammatory response the gut and autoimmune response to send antibodies will decrease. This decrease is what you want and need.

When you eat a food over a period of time that causes dysbiosis in your gut it wears down your intestinal lining. The intestinal epithelial barrier is a sort of lining along the wall of your intestines. If that wall is compromised over time by foods that weaken it then it can actually form ‘cracks’ if you will where food particles leak into the bloodstream. These particles are seen as foreign invaders by the immune system and this triggers the autoimmune response to send an antibody to see what’s going on.

If these foods aren’t taken out of the diet and good foods and nutrients reintroduced to heal the epithelial barrier then autoimmune disease will continue to be an issue and struggle.

So What Feeds Autoimmune Diseases?

Each person will have a different nail in the coffin so to speak. There are general guidelines that can help you in the dismantling of autoimmune disease though. According to one of the leading experts in the field Dr. Tom O’bryan (watch his video series on autoimmune disease by clicking here) we can start with something that effects most of us negatively, especially those with an autoimmune disease.