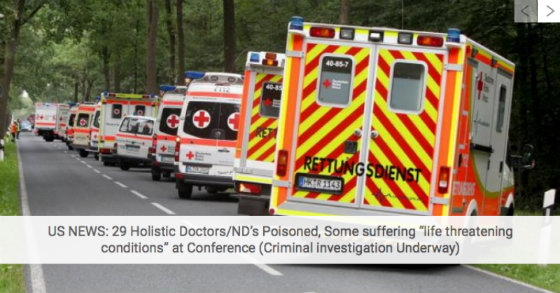 Our main source is US News and World Report, hence the title. Several have asked me if this is a satire piece. Like all my pieces I write- it is factual and very real.

29 “holistic doctors/ naturopaths ” found lying in the garden” and some staggering doubled over in pain, some in a “life threatening” state of poisoning from “psychedelic drug 2C-E or Aquarust “. They were all in attendance at an “alt med” Homeopathic Health Conference. Doctors and practitioners (those who could speak) allegedly said they didn’t knowingly take anything they took that would cause this. Some were hallucinating and some still too sick to be questioned and hospitalized.

15 ambulances along with a helicopter were sent in to help the holistic doctors and naturopaths at the homeopathic conference. Some found with “life threatening conditions” mainstream news reports. Depending on the news sources these practitioners are called alt med/ holistic doctors or naturopaths, but one thing is clear: the articles state that experts at the scene said it didn’t appear they knowingly ingested what made them ill. Some were extremely ill when the 15 ambulances and helicopter flew in to the rescue. From the Independent UK (who initially put their headline – we have screen shots- that “homeopaths get high on drugs” to something much more subtle that reads that chaos ensues at the conference (that sounds a bit more accurate) Torsten Passie, a member of the German government’s expert commission for narcotics, told NDR: “It must have been a multiple overdose. That does not support the view that the people concerned took the hallucinogen knowingly.

“One has to assume that people were not told about the substance, its effects and risks before taking it.”

Police are reportedly looking into possibilities including the drug being taken as a joint experiment, or it being furtively given to conference participants as a prank. No arrests have yet been made as the investigation continues into a possible violation of Germany’s Narcotics Act. I’m studying up on the drug in question, and here is a brief description. “2C-E is a psychedelic phenethylamine of the 2C family. It was first synthesized by Alexander Shulgin. It is commonly active in the 10–20 mg range, taken orally or nasally and highly dose-sensitive”

From the another article:

“The questioning begins as soon as the persons are coherent and their statements are useable,” said a police official quoted by the news agency DPA. The psychedelic drug 2C-E or Aquarust was banned in Germany last year. It has an euphoric effect and, like Ecstasy and Speed, belongs to the group of synthetically-produced amphetamines.

Some 160 rescue personnel in 15 ambulances and a helicopter converged on Handeloh on Friday afternoon and rushed the 29 to various clinics in the Hamburg area. The patients, aged between 24 and 56, were found suffering from delusions, breathing problems, racing hearts and cramps, some in life-threatening conditions, according to the public broadcaster NDR.

The news magazine “Der Spiegel” described those affected as alternative and homeopathic practitioners. NDR said doctors were also among the seminar group and suggested that participants might have taken part in a drug experiment. (Health Nut News note: There are mixed reports as the fire service spokesperson says the practitioners didn’t knowingly take the drugs, yet there seems to be an investigation (some reports say) where they’re suspecting they did (educated doctors taking drugs that put some in a life threatening state) Fire service spokesman Mathias Köhlbrandt told NDR that he had never experienced such as situation.

“Men and women lay with cramps in the garden and in front of the building,” he said, adding they did not seem to have knowingly taken a drug. Some were suffering delusions and even psychoses, NDR reported. Some patients were administered sedatives en route to hospital, said the emergency response physician who headed the rescue operation, Dr. Kai Rathjen.

From the second more tame article:

Authorities say emergency workers called to a conference center in northern Germany found some 30 practitioners staggering and suffering from cramps, apparently as a result of amphetamine poisoning.

Fire service spokesman Matthias Koehlbrandt told broadcaster NDR the group was aged between 25 and 55. NDR reported they were alternative and homeopathic practitioners, and that they were taken to the hospital. Authorities said their preliminary finding was that the group was poisoned with amphetamines, but Koehlbrandt said they didn’t knowingly take the substance. In the wake of my unintentional series on holistic doctors dying, I had several people send this to me the last few days. I admit I scanned it, but only today saw the severity of the story. Again, the ones who could talk allegedy say the didn’t knowingly ingest anything that would cause them to become deathly ill. (poisoned) A criminal investigation is underway according to at least one news source.

We hope all the practitioners will have a full recovery and will update you on the situation as soon as we have more information. This is Erin Elizabeth in Florida on Sept 7th , 2015.

ABOUT THE FOUNDER OF HEALTH NUT NEWS: 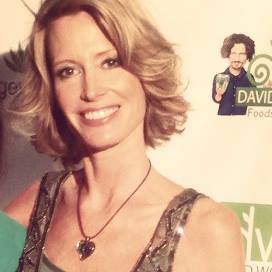 Erin Elizabeth is a long time “health nut” with a passion for the healing arts for 25 years. She’s humbled that her site (under 2 yrs old) has cracked the top 20 natural health sites worldwide. She is an author, public speaker, and advocate for healthy living. You can get Erin’s e-book here for free on how she overcame Lyme, a significant weight gain and more. You’ll also get occasional updates on cutting edge health news and her upcoming TV appearances. Follow Erin on Facebook, Twitter, and Instagram.
PS! sign up for her Youtube channel here with informative health videos, giveaways, and breaking news stories.