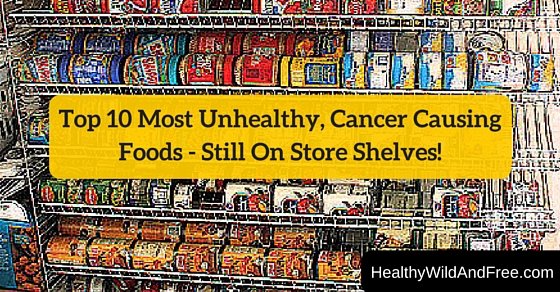 Being a health blogger I hear it a lot “Everything causes cancer now!” and then a slightly irritated commentator disappears into the web. I hear it in person too, we all have. I personally don’t use this phrase or expression myself because I know that everything truly doesn’t cause cancer, but when I hear it I think to myself about why someone would say this. Why would you say “everything causes cancer” when it’s obviously not a true statement.

For people that may not care about their health and vitality this justifies complacency. Throwing the blanket ‘everything causes cancer’ excuse over the conversation allows them to opt-out and avoid being educated on what actually does cause cancer. When these people are diagnosed with cancer years down the road who’s fault is it? They had access to the information sharing with them what has and does cause cancer but they chose to ignore it.

I sincerely hope you’re not one of these people, don’t ignore the science. Once you become educated in this aspect you can make healthier decisions starting today. Years down the road you don’t have to look into the eyes of your family members and loved ones and take a good, honest, hard look at yourself and realize that you could have prevented it. If you are or have been a “everything causes cancer” mentality type of person, be wise, starting today. Begin a journey to invest even just 10 or 15 minutes a month educating yourself on topics of health and nutrition and use what you learn to your advantage to be healthier and prevent all diseases or conditions.

With that being said, I hope we are on the same page and can live in a healthier world with less cancer diagnoses because of this information being utilized and shared.

Hydrogenated oils are most often used to preserve processed foods and keep them stable on store shelves. Unfortunately these oils are not healthy because they alter the structure and flexibility of cell membranes throughout the human body. This can lead to a variety of health conditions and diseases including cancer. Some food manufacturers are finally slowly removing the use of hydrogenated oils and replacing them with palm oil and other healthier, more stable alternatives, but trans fats are still quite commonly used in processed foods. Look for Hydrogenated oils such as vegetable oil, vegetable shortening, margarine, coffee creamers shortening should be avoided. Many packaged foods and baked goods contain hydrogenated labels so read the label and once you know it contains it you can avoid it and opt for a healthier alternative!

Now this is where I may lose you! You may be saying “David, this is why I think everything causes cancer nowadays!” but bear with me. I’m not advocating don’t eat fruit or vegetables at all, it’s healthy and beneficial in many ways. There are a few select fruits and vegetables however that contain abnormally high levels of cancer causing pesticides if not grown organically. These fruits include apples, grapes, strawberries, peaches, celery, spinach, sweet bell peppers, nectarines, peaches, cucumbers, potatoes, cherry tomatoes, lettuce, blueberries. There’s a list online of foods called “The Dirty Dozen” which is a list of fruits and vegetables that contain the highest levels of pesticides. Some of the fruits and vegetables above have been found to contain over 50 chemicals from pesticides in them! These are cancer causing chemicals sprayed on the food to kill pests but get in the food as well. If you grow your own food organically you can literally remove 50+ chemicals, by having a backyard garden. Organic fruits and vegetables can still contain some chemicals but not nearly as much. The Environmental Working Group (EWG) found that 98% of produce contained cancer causing pesticides! This is yet another great reason to eat organic.

Farmed salmon is quite common as the oceans are becoming depleted of fish at a fast rate. Overfishing has caused some food manufacturers to raise salmon fish in small controlled environments which are extremely unhealthy for the fish which would normally be in a large lake or ocean. In the case of salmon fish it is another high-risk cancer food. Dr. David Carpenter, Director of the Institute for Health and the Environment at the University of Albany. shares that farmed salmon not only lacks vitamin D, an extremely important vitamin for immunity and cancer prevention but it is also often contaminated with multiple carcinogenic chemicals such as PCBs (polychlorinated biphenyls), flame retardants, pesticides, and antibiotics. If you eat salmon or any fish make sure that it is wild caught fish. These fish eat what they were intended to eat in nature. If the meat you eat is healthy then you benefit from it, if it is not then you get the negative effects as a by-product.

I feel like we should all know this by now, it’s one of the worst cancer causing and growth ingredients added to food period! Sugar feeds cancer cells directly. High fructose corn syrup (HFCS) is no better, cancer cells have been shown to metabolize fructose corn syrup in order to proliferate cancer further. Foods like cookies, cakes, pies, sodas, fruit juices, even sauces, cereals and breads contain sugar! Many other processed foods are loaded with HFCS and/or sugar. It makes sense that cancer is on the rise! Not only that but cancer cells have more insulin receptors than healthy cells. This means that the sugar to insulin spike goes to cancer growth and proliferation first and foremost! Avoid high fructose corn syrup and avoid white sugar. There are plenty of healthier alternatives.

White bread and white sugar are two of the worst culprits. White flour breaks down in the body and as a carbohydrate feeds cancer. A study published in the journal Cancer Epidemiology, found that regular consumption of refined carbohydrates was caused a 220 percent increase in breast cancer among women. White flour and white bread is a high glycemic food and should be avoided. Think breads, pastries and anything with white flour.

Soda has been shown to cause cancer as well. Soda is loaded with sugar, chemicals in the formulation, and food dyes, soda causes the body to become more acidic. When the body is a more acidic environment cancer cells can proliferate faster. Soda chemicals like caramel color and its derivative 4-methylimidazole (4-MI) have also specifically been linked to causing cancer.

Processed meat should be avoided. Lunch meats, bacon, sausage, and hot dogs contain chemical preservatives that make them appear fresh but these preservatives are carcinogenic. Many of these processed meats contain sodium nitrite and sodium nitrate which have been linked to significantly increasing the risk of colon and other forms of cancer. If you eat meat choose grass-fed certified organic meat and read the label!

Microwave popcorn is a quick and easy snack but the bags of microwave popcorn are lined with chemicals that are linked to causing not only infertility but also liver, testicular, and pancreatic cancers. The Environmental Protection Agency (EPA) concurs that the perfluorooctanoic acid (PFOA) in microwave popcorn bag linings as “likely” carcinogenic. Several independent studies have also linked this chemical to causing tumors. Also, the diacetyl chemical used in the popcorn itself is linked to causing both lung damage and cancer. I don’t personally find popcorn itself to be unhealthy. You can buy organic popcorn seeds and put them in a popcorn machine that’s literally $22 on amazon and then add organic olive oil and himalayan salt and have a much healthier and cheaper alternative.

GMO Foods (otherwise known as genetically modified foods or genetically modified organisms) are foods that have been genetically altered in a lab. The seeds take a characteristic from one plant or animal and splice it with another gene to create a new “bulletproof” seed. These “bulletproof” seeds have failed horribly. They depend on the use of pesticides and chemicals (specifically the product Round-Up) and they become contaminated with these pesticides and chemicals. There have been multiple independent studies showing that GMO foods cause cancer and tumor growth. The most commonly found GMO foods are corn, canola and soy. You can best avoid GMO foods by avoiding corn, soy and canola (unless it’s organic). You can also avoid GMO foods by only buying certified organic, certified NON-GMO project verified foods. If the food contains the USDA Organic and NON-GMO project verified label then you’re good!

This is the list to know, and understand. If you avoid these foods you’re doing your best to prevent cancer and what more can you do than that? Also, as you may have noticed the recurring theme here is chemicals, chemicals in your food. By avoiding foods with chemicals, pesticides or preservatives you also avoid the neurodegenerative, cardiovascular diseases and conditions as well as the aches and pains that come with these foods as a by-product of eating them. You’ll feel better, have more energy, sleep better and enjoy life more today by simply choosing to eat healthier. Please spread the word and share this information with your friends and family, it’s very important.

Recommended Reading: The Top 6 Cancer Prevention Foods Of All Time