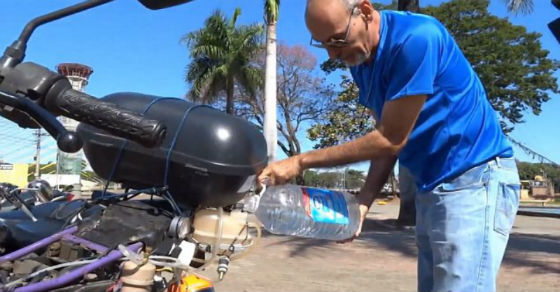 A motorcycle able to travel up to 500 kilometres (310 miles) on a litre of water was announced by creator Ricardo Azevedo in Sao Paulo, last month. It’s called the “T Power H20,” and the design includes a combination of water and a single, external car battery that’s used to produce electricity, and spark the process that separates the hydrogen from the water molecule. As a result, the necessary energy to power the bike is created.

A large amount of skepticism still remains about water-powered machinery. Those who are skeptical will often cite various reasons as to why it’s not possible including the law of thermodynamics. While others will just lump it in the plain old “conspiracy realm” with no true reason at all. This has many people confused, why would Ruptly TV, a parent company of RT news, The Daily Mail, websites like the motorbike times and more publish this story?

This isn’t the first time we’ve heard of a water powered engine, which is why we are sharing it here. There seems to be many who claim that this is possible, and many who claim it’s not. A Japanese company called Genepax apparently unveiled their water powered car in 2008 in Osaka, Japan, but as always with this subject, harsh criticism and “hoax” shortly followed it.

There was also internet buzz regarding a salt-water powered car not long ago, you can read that story here. This also received harsh criticism, but one story that did not, was the fact that the United States Navy successfully converted sea-water into fuel.

Stanley Allen Meyer is another individual who invented a water powered car (many years ago) and it received very little attention when it came to making the news available to the masses. Today, it’s a fairly well-known story due to the mass awareness that has been created around it. Stan’s invention was picked up very briefly by a local news station in Ohio. You can view his patent HERE, which also describes the whole process. You can view the entire collection of his documents here. His story made headlines, and the Pentagon sent a Colonel to check it out. Shortly after that he was found dead.

Again, this topic has no shortage of controversy, so feel free to share your thoughts below. We’d like to hear from you. Regardless of whether you think this is real or a hoax, we definitely don’t need oil to run our machinery.