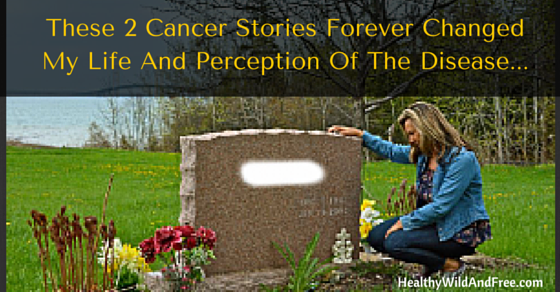 I’m going to share two stories with you today that forever changed my life, my perception on the disease of cancer, family, and ultimately shaped what I now do for a living. Before I share with you these two life shifting events that I hope will move your heart as much as they did mine, i’d like to share with you some very basic facts.

41% of Americans Are Diagnosed With Cancer in Their Lifetime.

1 Out of 2 Men and 1 Out of 3 Women Will Be Affected By Cancer In Their Lifetime.

She was advised by a doctor (PhD) to cut her Colon out and that she could live with a bag in her Colon for the rest of her life. She didn’t like the sound of that and felt she was too young and didn’t want to take that risk. As a young boy, growing into a man I felt afraid for my mom’s life. I vividly remember going to school each day walking past my mom laying on the couch, often in pain. She had two lumps in her colon that she could feel, and at first they were just lumps, but as time went on they became painful.

After consulting with several doctors and getting several tests it was confirmed that she in fact had Colon Cancer. At the time she worked in an independent healthcare practice and health was an interest and passion of hers. Through her doctor at the time (who recommended surgically removing her colon and having a bag for life) she found out about a health conference in San Francisco.  She knew in her heart that this was an event she needed to be at. She had just been diagnosed with Colon cancer and wanted answers.

She attended the conference and connected with another doctor who was speaking at the event, who ended up testing her in San Francisco. His test results found sigmoid carcinoma. This time it hit her hard, she had been diagnosed already but didn’t quite know for sure, but two tests from two different doctors clarified that it wasn’t a misdiagnosis. She had stage 4 Cancer.

At this point in my life I was 11 years old, so I was afraid. I remember walking past her on the way to school as she lay on the couch, half the time in pain, sometimes very very weak. I remember going to school thinking what is the point of school right now, I was in school but my heart was at home. That year in school I struggled, I was actually almost held back a year to cover that year again, thankfully I wasn’t though.

Fast forward later that year, on December 20th of 2001 my grandpa was diagnosed with Colon Cancer. I remember when my grandpa was diagnosed it was like my mom wasn’t diagnosed anymore, all the attention was on grandpa. Her dad became the focus. We visited him quite often but he was dying fast. The Cancer spread to his liver which effected his skin so his skin started changing color and turning yellow. His body became weaker and he started losing weight. He went from what seemed like healthy to dying from cancer very quickly in a short period of time.

He wasn’t healthy though, we just thought he was, cancer was lurking and proliferating under the surface, we just didn’t know that until it was too late. He retired from the railroad as a train conductor when he found out he had cancer and he died January 14th, 2002. A little over 3 weeks and just like that he was gone. Something very interesting happend though. At this time my mom had already had access to these high quality herbs from the rainforest that she was using and she started giving them to my grandpa. I vividly remember everything. One day my mom brought herbs and had him take them, his skin was quite yellow at one point. We came back the next day and his skin was less yellow, there was an actual noticeable difference.

I believe that these herbs were doing what they do, causing cancer cells to divide and die, what’s known as cellular apoptosis. Cellular suicide if you will. The herbs worked, I saw his skin start to revert back. But it was too late, and I remember my mom being upset and frustrated days later because she found out he was drinking the herbs down with soda and eating candy. Sugar is one of the worst, if not the worst thing you can ingest when you have cancer. Cancer cells have more glycogen receptor sites than regular healthy cells, they use it as fuel.  He didn’t know this, and sugar filled treats were a comfort food in his last days.

I saw a glimpse of what these herbs could do though, although he died quickly, I knew there was hope. Meanwhile, my mom still had stage 4 colon cancer. I think the difference between my grandpa and my mom was that my grandpa took his diagnosis as a death sentence, he saw it as the end and didn’t have enough fight energy left to fight it. It was the end of the line. It was tough seeing my grandpa die, he was actually my only grandfather because my other grandfather died from cancer before I was even born.

He was someone in my life that my dad wasn’t, we went fishing, he enjoyed the outdoors and camping and heading north in the summertime. My dad enjoyed the outdoors as well, I just had a different relationship with my grandpa than I did with my dad. A different connection. Seeing him die so fast was tough, my brother and I looked forward to journey’s with our grandpa. He always said he was going to take us hunting (because we had already been fishing with him) and he always said he was going to take us on a train one day, he was a train conductor. The future adventures with our grandpa died with him, and my brother and I both know we lost more than just a grandpa, we lost a close friend who taught us about life.

During this same time and after this my mom’s battle with cancer continued. Our family went to church on Sunday’s and some weeks my mom wouldn’t go at all because she didn’t have the energy to go. Some weeks she would go but feel so weak that she’d sit in a wheelchair to and from the church because she felt so weak. Friends at church prayed for her but she was having a really tough time. She had great people in her corner helping her find healing avenue’s for her cancer but it was still very tough. Our entire family drove down south in the van so she could go to a health clinic for natural treatment protocols.

This doctor that tested her initially in San Francisco became a pivotal person in her healing and recovery, and so did another person at the event who was developing a company and line of products that harvested herbs from the amazon rainforest. I can honestly say (and I believe my mother would also) that if it weren’t for this doctor and these herbs her recovery and healing would not have been possible. I believe that these two people saved my mom’s life, and am extremely grateful for both of them. She is still alive today and if it wasn’t for her search to find the the best route to treat cancer she very well could be gone.

I remember during this time period one of my close friends mom had cancer as well. His mom had cancer for years and did multiple treatments, and ended up dying. I went to her funeral and felt bad for my friend. For some reason I couldn’t talk to him or face him after that. We went from being really good friends to just walking past each other. I felt hopeless for him and hopeless for myself because I knew that his mom could have easily been my mom.

If it wasn’t for this doctor, and this line of herbs, my mom could be and probably would be dead today. Part of my mission now is to connect people that are suffering from life threatening diseases with better alternatives, with options that allow them to heal and survive. Where are these doctors? what are these alternative cancer treatments? Thankfully, there’s an event that ties a lot of this together. It’s called the truth about cancer, it’s a documentary series that launches later this month and lasts 9-days. It’s free to watch and I highly recommend that you do so. You can watch the event by clicking here and signing up to do so. This event is really important to me personally. I feel like everyone has a story or two about how cancer has directly affected them in their life, what is your story? does it matter to you? Do you want to prevent or avoid cancer in the first place? Then this event is for you, your friends, and family members. If you wouldn’t mind helping to spread the word by sharing this on facebook and in social media. I hope that hearing my story inspires you to prevent disease, take action to be healthy and be ahead of the curve on this.

I learned a few things from my grandfather and mother and their cancer stores.

First, Cancer is preventable. They both got cancer but now with the science and understanding of the body and health cancer is completely preventable, I would say 80% or so of your ability to get or not get cancer is in your hands, maybe more. Before we did not know. Now we do. That’s why this event (below when you take the quiz you’ll learn more about it) is so important.

Second, I believe cancer is treatable and can be reversed. Call it a cure, call it whatever you want. People gain weight and lose weight, people get skin conditions and then heal those. The human body is moldable like clay. Understanding disease and becoming educated on health and prevention is important. In my world, prevention is the cure. If something prevents cancer from proliferating and growing out of control (such as a vegetable or fruit that has anti-cancer properties) wouldn’t it be smart to utilize that in the cancer treatment protocol? One of the people I admire and follow in the world of health and wellness say’s something like “Any disease is curable by doing the opposite of what created it.” So what created it, it being cancer? If we know, we can act smarter.

If you want to learn how to prevent cancer and understand the many treatment options beyond the two basic options (chemo and radiation) then join Ty on the journey to discover the truth about cancer in the documentary series here that airs for free later this month.

Also keep in mind that prevention is the best ‘cure’ so become aware of what causes cancer (carcinogens in food and products) and what helps to prevent cancer. If you pay attention to the food you eat, the drinks you consume and the products you use on your body and in your home you can reduce your cancer risk quite a bit just by making smarter decisions. You can also take a 42-second quiz to determine your risk for cancer right now below on this website. It may seem frightful, but try it out. Becoming educated and aware now is the best thing you can possibly do.

Cheers to a healthy, disease free life. I wish you and your family the best and hope this documentary series impacts your life as much as it does mine.  Sign up to watch it right here, or take the quiz below…