This is Why You Should Never Wait To Poop 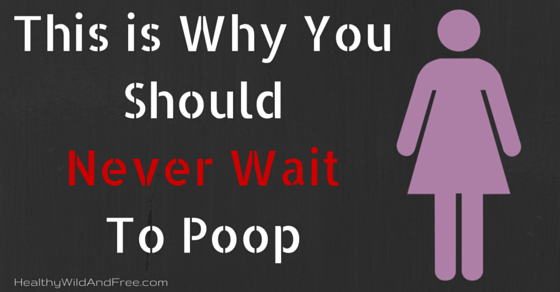 One of the most important functions for health and longevity is regular bowel movements. If you do not have regular bowel movements than your body begins to store toxic fecal matter, human waste, in the Colon. Long term this leads to weight gain (in the form of fat) and also hinders the health of the intestines. Sometimes we feel more comfortable having our “regular” bowel movement at home, but if we’re out and about and feel the urge we have to act on that urge quickly. Here’s why…

If you’re already constipated holding your poop to “go when your comfortable” is one of the worst things you can do for multiple reasons. If you have regular bowel movements (2-3 a day) it’s still bad for your health. You’re holding in toxic fecal matter that will sit in your Colon and make it more difficult to have future bowel movements.

Once again, this leads to weight gain (in the form of toxic fat) as well as disrupting the normal flow of your digestive system.

You can also develop what’s known as impacted bowel, which is were a chunk of fecal matter get’s stuck and you cannot move. Impacted bowel occurs when an immobile mass of feces builds up in the rectum, which results in chronic constipation. This can become dangerous and even fatal.

She adds: “So holding in is bad. If you don’t poo when you need to, all the waste and toxins are just sitting in there

“And your body keeps making waste, it can lead to an impacted bowel.

“Sometimes surgery is required, and if left untreated, an impacted bowel can actually kill you.”

More than likely you won’t die obviously, unless you hold it for weeks. I found this exceprt from Women’s Health:

“It’s a fact of life that everyone poops. In fact, regularly emptying your bowels is pretty much a prerequisite for good health. With that in mind, imagine all the problems that could arise if you were so stopped up, you couldn’t go for months. That scenario ended tragically for Emily Titterington, a 16-year-old from Cornwall, England, who died on February 8, 2013, after not pooping for eight weeks. Emily, who had mild autism and had dealt with bowel issues for most of her life, reportedly had a fear of toilets so severe, it led her to withhold stool until it became life-threatening. According to the medical inquest into her death, she suffered a fatal heart attack as a result of her enlarged bowel, which shifted around and compressed some of her organs.”

I’d say that if you have not pooped or are holding a bowel movement for anywhere even near a week to take some natural digestive aids, drink a lot of water, go for a long walk and do what you can to naturally stimulate a bowel movement. One of my friends didn’t poop for 4-5 days while away on a vacation and she had felt a lot of nausea and dizzy as well as sick to her stomach on the 3rd and 4th day. After finally pooping she felt a bit better but still felt nausea. Any time that you don’t poop for a duration of 3-4 days or more do what you can to stimulate a natural bowel movement, preferably not with a laxative but with something like drinking apple cider vinegar water, kombucha or magnesium water. I’ve found that apple cider vinegar water, kombucha or magnesium water help me have a larger bowel movement sooner and get all that out!

If you get in the habit of holding bowel movements for too long this can require surgery to remove the blockages. Each time you hold a bowel movement you’re telling your body to hold onto fecal matter, to hold this toxic waste until later. Enough of that causes your body to accumulate more waste and hardened fecal matter that can cause serious issues.

So, next time you are in public and feel the urge, don’t hold it in or wait, just get it out! it’s the healthiest thing to do.

Recommended Reading: Did you know that your posture matters when you poop?