Would You Like Your Receipt? Health Conscious Consumers Say NO! 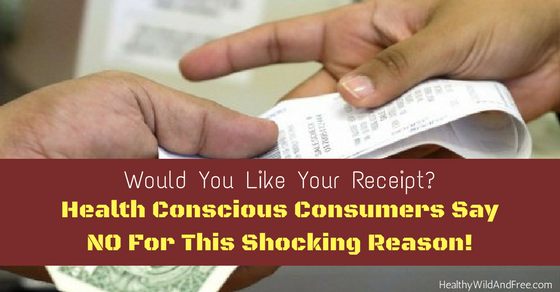 Do you ever come across something online that seems really ludicrous but after digging into it you realize it’s not so crazy after all? This may be one of those instances. A few years ago my brother mentioned to me that sales receipts contain BPA (otherwise known as Bisphenol A) which is chemical found in plastic that has been found to be toxic when in the human body, however it gets there.

BPA has been linked to negatively influencing hormones, effecting male reproductive function, fetuses in utero, the pituitary gland, testicle hormonal production, and more. BPA is harmful for a little baby and a full grown man alike. It seems to harm more than anything the endocrine system (hormonal system) throughout the entire body. It also harms embryo development of babies in a few ways.

Another interesting side effect of BPA in the bloodstream is it’s influence on vitamin D levels. A study done by the Endocrine Society Journal of Clinical Endocrinology & Metabolism, found that people who were exposed to larger amounts of phthalates were more likely to have lower levels of vitamin D in the blood than the participants who were exposed to smaller amounts of the endocrine-disrupting chemicals. The study also found that there also was an association between exposure to higher levels of BPA and reduced vitamin D levels as an effect in women, although the findings weren’t as significant in men. Researchers found that hormone disruptors can mess with the active form of vitamin D in the body. It is also found to disrupt normal reproductive and thyroid function.

What Does The Effects Of BPA On Human Biology Mean For You?

The hormonal system of men and women suffer alike. Men seem to suffer more hormonally from BPA than women while women take a larger vitamin D hit from BPA then men. Babies are damaged while style in the embryo if the mother is exposed to BPA.

It’s toxic stuff. It was first banned in countries in Europe. France was one of the first to ban it. Canada banned it. Belgium, China and Malaysia. Many countries in the past decade have completely banned BPA (bisphenol A) from entering their countries. The science is clear and most Governments who are aware have done what they can to ban it.

How BPA From a Receipt Can Influence Your Health…

Interestingly enough receipt paper from the grocery store, gas station, bank or mall is printed on what’s known as thermal receipt paper. This receipt paper is 1-2% BPA by weight. A small amount right? Well, kind of. It isn’t a massive amount but it’s in a different form. It’s on paper that you’re touching, that breaks down much faster than a plastic cup, fork or spoon. This form of BPA is transferred to the fingertips simply by touching it whereas BPA from plastic sources needs heat or other compounds that break it down slightly in order for it to be absorbed.

Furthermore, BPA on receipts has an interesting study behind it that adds a little more weight to this topic. People tend to use sanitizers such as purell , hand soap and hand lotion on their hands. These products typically contain compounds that help the skin absorb what is applied on them. They are formulated to enhance the effects of those very products. To enhance the absorption of the hand sanitizer, the lotion or soap. The issue comes in when you’re using these products on your hands and then you touch a receipt. That BPA is absorbed right through the skin into your bloodstream.

One study found that cashiers had more BPA in their body than average people. This was a small group tested but some correlation found this to be true. They handle receipts daily.

Research from the university of Missouri conducted a study to mimic the aspects of people at a fast-food restaurant. People who bought fast food, used a hand sanitizer, handled a receipt and ate food. The study found that people who used hand sanitizer before handling a receipt and eating were ingesting 100 times more BPA.

What does this mean for you? Say no to a receipt unless you really consider returning that product and are unsure. For most everyday transactions though such as a purchase at the grocery store, fueling your car or your food at a local restaurant (especially, as explained above) are worth not collecting and holding the receipt, especially before eating.

Watch this video on BPA and Receipts To Learn More:

The receipts printed on thermal receipt paper include but are not limited to cash register receipts, bus tickets, train tickets, plane tickets, luggage tags, lottery tickets. You get the picture. It’s that receipt paper that is printed from a receipt machine. It has a sort of oily/inky feel on your fingers unlike regular paper.

The most important takeaway you can get from this article is to say no to receipts that you’ll end up throwing away anyway. This can prevent these receipts from even being printed in the first place which saves paper and prevents more BPA in the environment. BPA is also an environmental hazard so saying no benefits your health, the environment and it saves the establishment a few pennies on paper printing. It’s a triple win! Please share this information with your friends and family, especially mothers that plan on having children or who are pregnant as BPA is especially harmful to babies in the womb.