Leonardo DiCaprio Asks Humanity To Change The Way We Eat, Consume And Produce Energy in His New Film “Before The Flood” 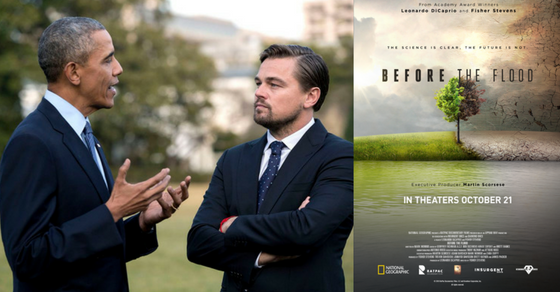 Last night I watched Leonardo DiCaprio’s new film, Before The Flood on the National Geographic youtube channel. Leonardo has been posting about this new documentary film on his facebook page for a while now. I had seen some pictures and posts about it and anticipated seeing it. In the film, Leonardo asks humanity to change the way we eat, consume and produce energy.

Why? Have you looked around lately? Have you seen what American culture has become? We’ve become fat, lazy, bloated and consumed with our STUFF. Stuff runs our lives. We eat more than ever before, use more energy than ever before. Consume until our hearts feel full of material possessions. We are demising the health and regular function of our planet as we know it because of our own actions.

What has changed? We eat more meat than ever before. We use more fuel than ever before. We leave the lights on and aren’t conservative with our actions and choices. We’re wasteful and have a wasteless mentality about everything. There is a lot at play here. The banks and creation of currency money (which is used as a medium of value exchange) does play a role into this, but I won’t get into that now.

Now, regardless of how you feel as Leonardo DiCaprio as a human or actor he brings a very important message to the public eye. It’s funny, I see people online attacking Leonardo for being “less eco-friendly’ when really these same people may be worse than Leonardo unbeknownst to them. There are many factors that play a role on your environmental footprint and i’d like to say that to some degree i’ve become a bit of a specialist in this over the years.

We all need to do the best we can do and that’s all that matters. In the film Leonardo talks about climate change and how the temperature is melting the ice and effecting various parts of the world in extreme manners. Now, whether you believe in climate change or not I think it’s important to understand one really important point here.

Whether climate change is happening or not, let’s just put that argument aside for a minute… The world and environment are changing at a rapidly alarming rate and not for the better. If you simply take a good, honest, open look at our environment and what humanity and multi-national corporations are doing to it, it’s bad, really bad.

The oil spills and plastic in the ocean alone are harming the oceans at an alarming rate. The tearing down of the rainforests all over the world including the Amazon which is very near and dear to my heart is killing off biodiversity that science doesn’t even know exists. Do you know how many cures for diseases and ailments are in the Amazon Rainforest alone? I believe, All of them. If you take the current research and scale it up to researching even just 25% of the amazon Rainforest there’s no doubt in my mind we will have a natural cure for every disease and ailment known to man. That along with all the oxygen that the amazon breathes into our existence to sustain us everyday.

So wherever you’re at, whatever you believe, it’s important to at least understand the role that humanity is playing in the environment and that to some degree (in my opinion, a larger degree than we realize) we’re screwing it up way too fast. We have more sustainable food and energy solutions that we can utilize if we make the investment and become more conscious as consumers. The change starts with us. Here’s the trailer for the “Before The Flood” Film:

In the film Leonardo simply asks humanity in a call to action at the end of the film to change the way we consume and produce. Simple as that. Change the way you eat. Did you know that by eating less meat or that by simply switching from eating beef to chicken more often you help reduce climate change? My recommendation as a health coach? Just east less meat overall. Americans eat too much meat to begin with and reducing meat intake will be better for the planet, your health and your wallet. It’s a triple-win!

Next, pay more attention to your consumption and use of fossil fuels. I do not own a car, I own a motorcycle. By simply driving less and using more economically efficient means of transportation (including a bicycle for those short trips) you’ll be saving money and helping to reduce pollution.

There are so many changes that you can make. Ideally i’d like to see Leonardo do a follow-up to this film and create a film that educates the public on changes that they can make in their daily lives. I’d love to be a part of a project that teaches people how to change. It’s important to see through the layers of petrochemicals and branch out into your own sustainable life. We can all do this. It’s not only better for the planet in terms of pollution but it’s also better for our health and saves us money in the long run. It’s worth investing into. Your time, energy and thoughtful changes will lead to a better result in your life. I guarantee it. I’ve seen it firsthand in mine.

If you saw the trailer and would like to learn more about the scope of the problem, please watch Before The Flood on youtube below. It’s been a trending video with over 4 million views in just a few days since it’s release.