This is The Most Important Action To Detoxify Lymphatic Toxins 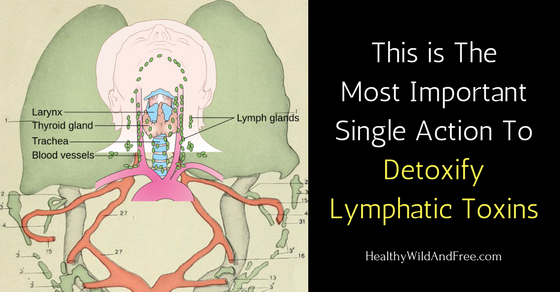 When you exercise your heart rate speeds up. But what about the lymphatic system? The lymphatic system is a complex system in the human body that relies on movement, oxygen and hydration (water) to flow and do it’s job properly. The lymphatic system is comprised of a network of tissues, organs and fluid that rids the body of toxins, unwanted waste and things that could be potentially harmful. The lymphatic system is also responsible for transporting white blood cells from the immune system to the entire body. If you lack proper hydration, oxygenation and movement the body will accumulate lymphatic toxins. These cells are strong defense mechanisms to fight infections, viruses, bacteria and other forms of parasitic harm on the body.

Certain parts of the body such as the tonsils, adenoids, spleen and thymus are all part of the lymphatic system. If there is swelling or inflammation in these areas there’s a good chance that the lymphatic system is being taxed too heavily and is suffering to do it’s job in a healthy manner.

You may be wondering, where is the lympahtic system located? It is located beneath the skin and above the muscles. It plays a key role in your blood and immune health.

What is The Lymphatic System and How Does it Work?

The lymphatic system contains lymphatic vessels, lympahtic fluid and white blood cells known as lymphocytes and macrophages. Each part of the immune system has a specific job for the body. This video explains the lymphatic system in a simple way in about 4 minutes:

If you’re familiar with the concept of Yin-Yang then this analogy will make the most sense. You could give your heart, blood circulation and this entire system the yang energy. Yang is a hot energy that produces and moves heat. The heart and blood do this for your entire body. The lymphatic system on the other hand is the equivalent of this system in that it has a network of flow throughout the body but it is more cooling to the body.

The heart pumps and pushes blood throughout the body whether sitting or standing, walking or running. This is a constant process to keep you alive. The lymphatic system on the other hand only moves through movement.

This is why exercise such as walking, running, rebounding on a trampoline, swimming, playing sports or any other form of movement is very beneficial to the lymphatic system. The entire lympahtic system relies on movement to be and stay healthy. The lymphatic system is essentially the bodies second circulatory system that relies heavily on movement.

In fact, the word “Lymph” comes from the latin word “Lympha” meaning water. When it comes to the lympahtic system there are 3 key things to remember to keep it healthy.

These 3 components are the key component drivers that when input into and with your body produce a healthy lymphatic system. Think of these 3 components as the key nutrients that the lympahtic system needs to stay healthy. This is why it is very important to make sure that your body is thoroughly hydrated, you have pure oxygen to breathe and your body moves regularly.

Interestingly enough in my research I have found one component to be a sort of biohack for keeping the immune system healthy and to help detoxify and drain lymphatic toxins at a faster rate. This is something we do all the time (hopefully) that has many other benefits also.

Biophysical studies have found that good deep belly laughter helps the diaphragmatic breathing needed to create a strong negative pressure within the thoracic duct. The thoracic duct is located in the chest near the jugular vein and left carotid artery. This is the largest lymphatic vessel in the body. When this duct is under negative pressure, the lymphatic fluid needs to be in an area of less pressure. It then shoots the lymph through lymphatic vessels at a faster rate. The speed is increased  and the flow up to 10-15 times its normal rate of flow!

Because of the increased flow of lymphatic fluid this means more lymph is passing through lymph nodes. This results in higher rate of lymphocyte production. Lymphocytes are immune cells that help protect the body from dangerous threats. Specifically T and b-cell lymphocytes, as well as NK cells which are the natural killer cells are produced. Increased number of lymphocyte cells circulating in the blood means better immunity for the entire body toward diseases, especially cancer.

Keep The Basics in Mind But Add More Laughter

Remember that water, deep breathing and physical movement in the form of exercise are the 3 areas vitally important to lymphatic health overall, but laughter may need to be a bit more of a priority for lymphatic health moving forward.

Furthermore, engaging the diaphragm with of deep breathing including laughter immediately activates the parasympathetic nervous system. The parasympathetic nervous system slows down the body and helps it stay calm. It produces endorphins which are feel good hormones that help to keep stress hormones under control. Not only does the lymphatic system and immunity benefit but laughter helps to benefit lowering of blood pressure, slowing the heart rate and keeping you happy in the moment with that endorphin rush! What is the key takeaway? Laugh more! Watch a comedy movie. See a comedy show. Do laughter yoga. Hang out with that friend you haven’t seen in a decade who is absolutely hilarious. Get your daily dose of laughter in your body! Your lymphatic system loves having less lymphatic toxins to deal with!

Recommended Reading: 10 Signs Of A Clogged Lymphatic System , The Health Benefits Of Laughter