Dirty Electricity: The New Health Challenge That No One is Talking About 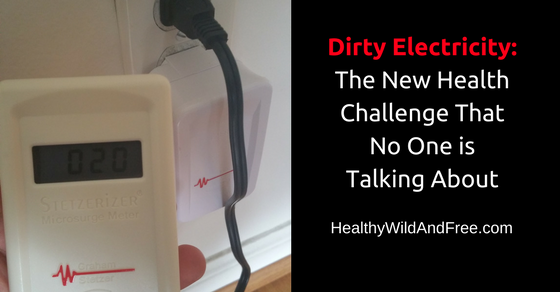 Most people have not heard the term “Dirty Electricity” So what exactly is it?

Dirty electricity is a common term used for Electromagnetic Frequencies (EMF) and Radiofrequency Radiation (RMF). This EMF/RMF pollution happens when anything that carries or holds power is transmitting at more than 50 Hz. This includes kitchen appliances, wifi, cell phones, power lines,TVs, ect. The high hertz frequencies traveling through wires and electrical systems result in voltage spikes, or surges, as well as frequency variations, which are also called high frequency voltage transients, and combine to form a complex and potentially harmful electromagnetic field.

You can’t see this form of pollution with your eyes, you can’t smell it with your nose, you can’t taste it, and you can’t even touch it. However, it is something that has been widely studied in many different fields. With all of the elevated language and mixed opinions it can be challenging to understand, so I hope this article can help become a sifter for you.

Do You Have Any Of These “Dirty electricity” Symptoms?

Look at the chart below. “Environmental sensitivities may affect every system in the body, so multiple symptoms are possible, with variation among individuals. Neurological symptoms are almost universal.”

The Immune System and Allergies

“People with environmental sensitivities often experience runny noses and reactive airways, with asthma-like symptoms, but this is not necessarily classic allergy. The lay person may consider ‘allergy’ to be equivalent to ‘adverse reaction,’ but medically speaking, ‘allergy’ refers to a specific type of reaction in the body that induces inflammation. Allergies involve an immune reaction wherein exposure to an allergen (e.g. pollen, animal dander, bee venom, peanut protein) stimulates the immune system to produce immunoglobulin E antibodies. Re-exposure may induce a range of inflammatory symptoms from rash, hives, red eyes or runny nose, to asthma or life- threatening anaphylaxis.”

Source of the research:
http://docs.stetzerelectric.com/Morgan-blood-glucose-correlation.pdf

The effect of Dirty Electricity on Children

Martha Herbert, an assistant neuroscientist professor at Harvard and a Pediatric Neurologist at Massachusetts General Hospital wrote a letter in 2013 to the Los Angeles Unified School District. She urged the district to look at keeping wired technologies within their classrooms instead of switching to wifi.

“EMF/RFR from wifi and cell towers can exert a disorganizing effect on the ability to learn and remember, and can also be destabilizing to immune and metabolic function. This will make it harder for some children to learn, particularly those who are already having problems in the first place… Powerful industrial entities have a vested interest in leading the public to believe that EMF/RFR, which we cannot see, taste or touch, is harmless, but this is not true. Please do the right and precautionary thing for our children.”

The first mobile phone call was made in 1973 by Martin Cooper who was a former Motorola inventor. Today, the smartphone is made possible by 250,000 separate patents while 95% of americans use a cell phone. It is no surprise that it’s the fastest growing industry in the world, but are there harmful and even detrimental effects to our health? Many studies have been conducted to try and figure out the answer, studies from headaches all the way to brain tumors. Many professionals have concluded that there is evidence while at the same time many have also concluded the evidence is equivocal. So what’s the truth? Is the cell phone, that is more than likely within an arm’s reach of you right now, having a negative effect on your well-being?

One study found that, “Headache(s) [are] increasingly being reported as a detrimental effect of mobile phone (MP) use. However, studies aimed to investigate the association between MP use and headache yielded conflicting results. To assess the consistency of the data on the topic, we performed a systematic review and meta-analysis of the available cross-sectional studies. Published literature from PubMed and other databases were retrieved and screened, and 7 cross-sectional studies were finally included in this meta-analysis. The pooled odds ratio (OR) and 95% confidence interval (CI) were calculated. We found that the risk of headache was increased by 38% in MP user compared with non-MP user.”

Another study done in 20017 took a look at 24 major brain tumor studies and compared them to dirty electricity. Their end result was shocking, “Our results support the hypothesis that long-term (over 10 years) use of mobile phones increases the risk of intracranial tumors, especially in the case of ipsilateral exposure… In people who had started using the phone on a regular basis before they were 20 years old, the risk of ipsilateral glioma was found to be fourfold higher.”

Whether or not cell phones are safe for our health has been something that is widely debated the last twenty years. But when the International Agency for Research on Cancer (IARC) classified RF radiation as a possible human carcinogen in 2011, Ron Melnick and his team at National Toxicology Program (NTP) sought to find an answer once and for all.  Melnick personally concluded, “The NTP tested the hypothesis that cell phone radiation could not cause health effects and that hypothesis has now been disproved… The experiment has been done and, after extensive reviews, the consensus is that there was a carcinogenic effect.” Learn more about a technology that reduces cell phone radiation by 99% by clicking here.

A Decrease in Sperm function

A group of professors and researchers “explored the documented impacts of RF-EMR on the male reproductive system and considered any common observations that could provide insights on a potential mechanism. Among a total of 27 studies investigating the effects of RF-EMR on the male reproductive system, negative consequences of exposure were reported in 21. Within these 21 studies, 11 of the 15 that investigated sperm motility reported significant declines, 7 of 7 that measured the production of reactive oxygen species (ROS) documented elevated levels and 4 of 5 studies that probed for DNA damage highlighted increased damage due to RF-EMR exposure.”

Another study done in 2015 done by doctors and scientists concluded this, “Regarding to the progressive privilege of 2.45 GHz wireless networks in our environment, we concluded that there should be a major concern regarding the timedependent exposure of whole-body to the higher frequencies of Wi-Fi networks existing in the vicinity of our living places.”

Dirty Electricity Has A Solution: The Good News

Dave Stetzer from Stetzer Electric has been facing this problem head on since 1974. He “has been an electrician by training, education and experience for over 30 years. He joined the United States Air Force in December 1970 and began his career in electricity when he attended electronics school at Keesler Air Force Base in Biloxi, Mississippi.” After he was honorably discharged from the Air Force in 1972, Dave founded Stetzer Electric.

Stetzer Electric is a company that offers services “ranging from electric motor repair and rewind, to commercial and industrial electrical contracting, to power quality analysis and the sale of STETZERiZER® Power Line EM Filters.”

Online, they sell filters help keep dirty electricity far from your home or area of work when used properly. a microsurge meter that “measures the average surge of the voltage surge at the electrical socket,” and shielding material that can be used on walls.

Check out their website for more information and for purchase details: http://www.stetzerelectric.com, or purchase your set of filters on amazon by clicking here.

Through all of the controversy regarding EMF/RMF pollution, many well-educated women and men have concluded that this is not something to brush over lightly. It’s easy to forget about since we can’t see, smell, taste, or touch it, but it is just as important as other pollution in our environment that can be sensed by one of the senses. Although there has been controversy, it is better to be safe than sorry. Check out Stetzer’s products and you may be surprised as to just how much better you feel in your home.