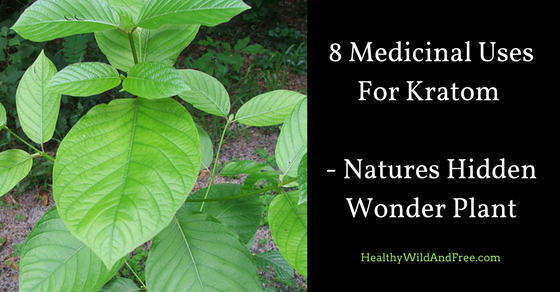 Did you know the United States makes up only 4.6 percent of the world’s population, but consumes 80 percent of pharmaceutical opioids. The amount of Americans on pain relievers has reached an all time high of 131 million according to a national survey done by the consulting firm IMS Health. As of 2014, 47,055 people or the equivalent of about 125 Americans every day die each year from an overdose of prescription pain relievers. Is there a safer and healthier way to relieve your ailments? After doing a little research, I came across a wonder plant, called Kratom, that might have the answer you’ve been seeking.

Kratom, is a large tree in the Rubiaceae family native to Southeast Asia. Kratom leaves contain more than 25 alkaloids including mitragynine and 7-hydroxymitragynine. These alkaloids act as mu-opioid receptor antagonist. The leaves of kratom have been used by the indigenous people as a stimulant in low doses, a sedative in large doses, an anti-diarrheal and pain killer. It is said that kratom affects the human brain similarly to an opiate.

Each strain has its own individual taste, potency, and color. We will talk about the various strengths after I share the benefits of kratom leaves as a whole.

Due to its extensive chemical properties, kratom leaves has been used for a wide range of ailments.

Indigenous cultures have primarily used the leaves for its analgesic properties. They quickly relieve pain throughout the body by impacting the hormonal system. Chewing the leaves work by increasing the amount of serotonin and dopamine that is released into the body. Essentially, the alkaloids dull the pain receptors throughout the body. This morphine or opium-like quality of kratom leaves is widely regarded as its most important application.

Works As An Immune System Booster:

Various alkaloids found in the leaves have shown that the combinative effects can have major effects on the strength and resilience of the immune system. Traditional beliefs about kratom leaves show that it can reduce the severity of illnesses and help  reduce the chances of getting sick.

Another benefit of kratom leaves that is not widely known is their effect on blood sugar levels. Limited research has shown that the alkaloids found in the leaves are able to help regulate the amount of insulin and glucose is in the blood, effectively preventing the dangerous peaks and troughs that diabetics face. Kratom helps diabetics manage their disorder and acts as a preventive measure for those who may develop diabetes.

It Works As An Energy Booster:

It can increase your energy levels by optimizing certain metabolic processes and impacting hormone levels. This is a result of increased circulation and oxygenated blood to areas of the body that need it. When that’s combined with increased metabolic activities, it provides a burst of energy. Kratom leaves are a natural alternative for those who suffer with Chronic Fatigue Syndrome.

Kratom leaves have been used as a method for curing withdrawal symptoms and dependence on opium for centuries. Opium addiction is a major issue in many cultures, but regularly chewing on kratom leaves provides a similar sensation without the comedowns and negative side effects. Therefore, kratom leaves are a safe and effective solution for weaning yourself off of opiates, barbiturates and even nicotine.

Kratom For Anxiety and Mood Swings:

Kratom leaves are widely used as an anxiolytic substance for people who suffer from chronic stress, depression, anxiety, and mood swings. It works by regulating the hormones in your body and relieving the symptoms of a chemical imbalance. Using this method leaves you without all those nasty side effects you would experience with  a pharmaceutical drug.

Studies have connected the use of kratom leaves to a noteworthy drop in blood pressure. As the leaves and their chemical components impact the body’s hormones, they also reduce inflammation throughout the body, including in the blood vessels and arteries. By relieving that tension in the cardiovascular system, kratom leaves are able to help prevent more serious heart conditions such as atherosclerosis, heart attack and stroke.

Used As A Fertility Booster:

You can find kratom in these 3 forms:

With those 3 forms, you can ingest kratom using these methods:

Some people experience these side effects during there first use:

Now that we’ve discussed this hidden wonder plant, would you try it? I feel it’s worth a shot considering the dependence on pharmaceuticals has reached an all time high and this is a much healthier alternative. Every drug whether natural or synthetic should be used in moderation and only taken for medicinal purposes. If you have any questions about Kratom, leave a comment below.