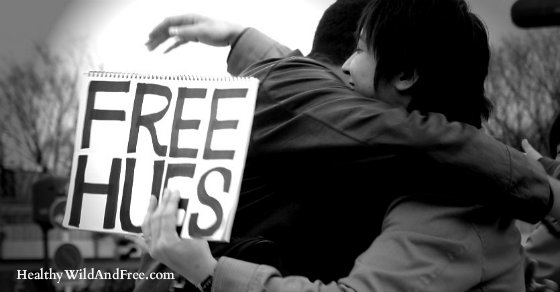 Affection is becoming a lost art in many (specifically more in modern countries it seems) because we expect what we want instantaneously. We get what we want, which may be sex or an orgasm but we forget to give love, which is time and tender loving care. Affection has become so foreign in some ways that we even polarize it or look down upon it.

We see someone consoling or holding someone in public and we may think something is wrong with them, or we tell kid’s in schools “No PDA” (meaning, no public display of affection) which is basically the same as saying “don’t show people that you love them” when you sum it up. It’s sad really, that affection has become foreign and rare in so many ways.

It’s time for each of us to make affection normal again. We should all be hugging, holding and cuddling more often for so many beneficial physical and mental reasons. Believe it or not, babies actually need physical touch (affection) for survival. In fact, babies left untouched by their mothers (or anyone really) can die solely because of this. Reading this shocked me.

“In the 1940s, Dr. Rene Spitz was left perplexed as to why babies under his care were dying despite being given the proper nutrition and sterile surroundings. Decades before this, reports had also surfaced of babies dying in orphanages in the U.S. for inexplicable reasons. These incidents triggered extensive studies that later gave birth to American psychologist Harry Harlow’s verdict: The babies died from lack of touch.” From ehow.com
The article goes on to explain that babies need touch to survive, develop, and thrive in relationships, life and work. Scientists also found that babies that were not nurtured and held (touched) enough as a child are more likely to be depressed, angry, use drugs, do bad in school and have poor relationships and family relations.
Furthermore James Prescott (a renowned developmental psychologist) found that the USA is one of the most violent societies on earth largely because we are low on affectionate touch. Think about that for a minute. We live on a society where we touch and show our tablets and our smartphones more love and affection than we show our partners, and it’s brutally damaging our lives.

After doing further research I stumbled upon some enlightening information on physical affection and the tangible health benefits and want to share it with you. It’s very valuable and because if you understand and act on this information it can add a lot of value to your life.

1. Affection Improves Your Mood Today & Tomorrow: Showing affection, whether hugging, holding hands or cuddling increases the level of oxytocin in the brain which is a feel good hormone that helps you feel better as well as relieves pain and has a calming sensation. Sex also releases oxytocin as well. Another study found that women who have physical affection are more likely to be in a positive mood the next day.

4. Affection is Trust: One study found that people who were more affectionate were seen as more trustworthy than those who were not. This makes sense considering the less affectionate someone is tends to mean they are more disconnected from people, society and empathy in general.

5. More Affection Creates More Satisfaction: One study found that in relationships more affection between each other led to them being more satisfied with and in their relationship as a whole.

6. Affection Reduces Stress Hormones: Another study found that with more physical affection in a relationship that the stress hormone cortisol is reduced. Cortisol puts your body into a state of anxiety and dis-ease, and disfunction.

You’ll notice that most of the benefits of physical affection have been studies done in romantic relationships. I believe that these studies and research carry a lot of value but I also believe that physical affection should be practiced even if you are single and not actively engaged in any physical relationship. If you care for someone, telling them is one thing but showing them is the next step, by taking time to be affectionate helps them and you benefit from the tremendous benefits of being a cuddly individual.

Remember that a form of love is affection and that when you practice affection you are practicing love. When you practice love the world becomes a better place. Hug and embrace somebody today, spread the love and affection!

P.S. If you want to improve your relationship with your partner and feel that love isn’t being given or received in a way that either person understands I highly recommend reading the book The 5 Love Languages