4 Surprising Facts That Will Make You Say No To Gatorade

Every time i’m watching a sports game and I see an athlete drink gatorade or throw the gatorade towel over their shoulder I laugh and think “really? this is still seen as the icon, the top symbol for a sports drink?” It’s astonishing really. With science developing and discovering more at a faster rate than ever before you’d think there would be an alternative by this point that is an actual sports drink that improves athletic performance.

Gatorade is cheap, not in cost but in quality. It’s actually quite expensive for what you’re buying, we’ll get to that later. As far as quality is concerned you’re basically buying a water that has a bunch of sugar added, with a bit of red and blue dye, plus some other crap. If gatorade is a “sports drink” you must be playing golf, because it won’t actually be giving you an athletic advantage, let alone do anything good for your health long term. Oddly enough I drank gatorade when I was a kid at my job, as a caddie.

Let’s take a look at the gatorade label to dive into what it is that you’re actually buying, and why you should completely skip this purchase next time and every time thereafter. 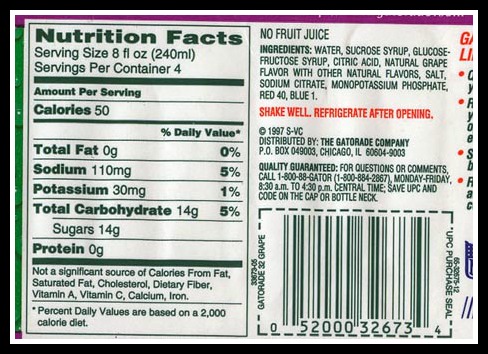 As you can see the ingredients list water, sugar, sucralose (an artificial sweetener), some contain dextrose, corn or high fructose corn syrup (a gmo food), red dye, blue dye, some labels contain brominated vegetable oil (from soybeans), natural flavors, salt. Essential it’s a bottle of water with sugar, added artificial sweeteners, food dye and one or a few GMO ingredients, depending on the flavor you get.

Now, as a health researcher and someone who has been always interested in athletic performance this is quite the list to go through and provide some clarity.

1. The Estrogen vs. Testosterone Hormone Battle:

Water is no big deal, you need water to stay hydrated as an athlete and that’s really honestly the only good ingredient in here. The issue I have is there water is probably tap water and it’s sitting contained in a plastic bottle that contains BPA. BPA is a chemical that leeches into the water from the plastic as it sits, especially when it sits in the sun.

What is BPA? It’s a chemical that when ingested mimics estrogen in the human body. In other words, your hormones will mimic estrogen rising. This is a female dominant hormone that women have higher levels of. Estrogen stores fat while testosterone burns fat and feeds muscle. If you’re an athlete as a male you want higher levels of testosterone, this is counter-productive to that because when estrogen rises testosterone levels drop.

The same goes with soybean oil or brominated vegetable oil which is derived from soy. Soy increases estrogen in the body which is counter-productive to having testosterone. Testosterone is a fat burning, muscle building hormone. In fact, did you know that steroids work in a way to multiple testosterone levels? Steroids are literally synthetically derived testosterone. When someone takes steroids they are actually boosting their testosterone levels to levels that are unnaturally high, which comes with it’s own bag of side effects.

Right off the bat the plastic bottle, soy-based gmo ingredients and sugar are reducing your athletic power hormone which is testosterone. They do this by increasing estrogen levels or decreasing testosterone by itself as in the case of sugar.

2. Sugar Gives You Boost Followed By A Crash:

If you’re an athlete of any kind you probably know this by now. With gatorade including 14 grams of sugar per serving and 4 servings per bottle that’s 56 grams of sugar! That will knock a cow out! A large dose of sugar causes a quick burst in energy and you’ll be benefited as far as energy is concerned for a bit. When that sugar metabolizes fully your pancreas produces insulin (a hormone) to manage the absorption of sugar. If you have high concentrations of sugar with no nutrition such as in the case of gatorade or soda’s, energy drinks etc. The body quickly uses this sugar, spikes, then crashes. Over time your body can become more insulin resistant meaning that you need more sugar for the same fix, the same boost that you got before.

This makes you more dependent on sugar for energy. Sugar is the worst source of fuel. Your pancreas suffers, your blood sugar system and hormonal system suffer. Your body becomes more acidic and less reliant on healthy fats and protein for energy. For good lasting energy it’s more beneficial to consume healthy fats, or sugar from fruit that also contains fiber and other nutrients that cause the fruit sugar to slowly absorb in a much healthier manner.

3. Preservatives, Dyes and That Neurotoxin:

Beyond the BPA, soy and sugar disrupting your hormones, lowering testosterone and stimulating estrogen. Beyond the sugar stressing your pancreas and hormonal system, there’s more. Gatorade contains several preservatives and additives that are not healthy in any way.

First, gatorade contains salt as it’s source of electrolytes. They use regular salt. This salt is processed and essentially sodium. There’s a bit of sodium and potassium but that’s about it. Regular table salt isn’t that healthy. The processing and bleaching (to make the product white) is harmful to the end product. Now if gatorade used himalayan salt, you’d have 84 minerals and a much richer concentration of electrolytes!

Gatorodade uses dyes in their formulas to give their drink that blue, red, yellow or orange color. Dye’s have been shown to be harmful in multiple ways. Red dye for example was shown to cause tumors in the bladders of rodents. Blue dye causes a higher rate of tumors as well, specifically brain tumors. Other dye’s have been found to have both tumorous and toxic effects in other ways.

Long story short, you want to avoid any food or drink that contains food dye, and gatorade is one of them.

Beyond that gatorade contains other preservatives and additives that contain their own host of issues. The last one i’ll touch on though is sucralose. Sucralose is an artificial sweetener adopted by gatorade to add even more sweet flavor to gatorade, as if sugar and high fructose corn syrup (gmo) weren’t enough. Sucralose is a known and thoroughly researched neurotoxin.

According to James Bown, an M.D., physician, biochemist and survivor of aspartame poisoning:

“Splenda/sucralose is simply chlorinated sugar; a chlorocarbon. Common chlorocarbons include carbon tetrachloride, trichlorethelene and methylene chloride, all deadly. Chlorine is nature’s Doberman attack dog, a highly excitable, ferocious atomic element employed as a biocide in bleach, disinfectants, insecticide, WWI poison gas and hydrochloric acid. “Sucralose is a molecule of sugar chemically manipulated to surrender three hydroxyl groups (hydrogen + oxygen) and replace them with three chlorine atoms. Natural sugar is a hydrocarbon built around 12 carbon atoms. When turned into Splenda it becomes a chlorocarbon, in the family of Chlorodane, Lindane and DDT.”

Doctor Bowen has spent 20 years researching artificial sweeteners after his use of aspartame resulted in being diagnosed with Lou Gehrig’s disease. I’ll take his expertise, personal experience and word for it.

Scientific jargon aside, sucralose (also known as splenda) is a neurotoxin that can cause hyperactivity, ADHD, and a variety of other mental conditions. Down the road artificial sweeteners such as aspartame and sucralose (splenda) can have even more harmful effects.

So there you have it. If you care about your health or athletic performance and career. Skip the gatorade. The hormonal effects, toxic ingredients and gmo additives are not worth the risk. What’s a good replacement? Coconut water! Coconut water is rich in a full spectrum of electrolytes, much better than gatorade. Coconut water is so close to blood plasma that in 3rd world countries they use it for blood transfusions if someone is losing blood quickly. It literally saves lives. It’s one of the healthiest things on the planet to consume for blood health and all those electrolytes will have your nervous system firing on all cylinders to take on any challenge.

Gatorade’s tagline should be “Your daily dose of sugar and brain frying dye’s and artificial sweeteners, in one bottle!”

If you’re an athlete who cares about performance, go with coconut water or Himalayan salt water instead. If you care about your health, avoid this, your pancreas, brain, and gut will thank you both short and long term.