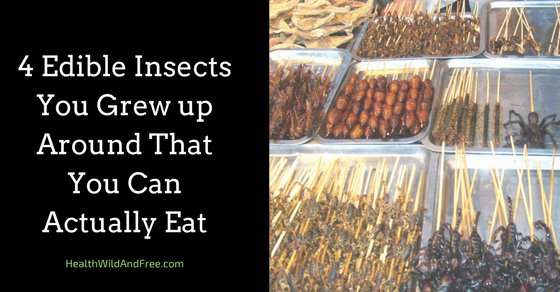 The first time I knew that insects were “a thing” to eat was when I found out that my uncle ate chocolate covered ants.  Then, when I lived in Japan as a kid, my dad came home with wasps.  He showed them to me and then dared me to eat them for 20 bucks.  I was that money hungry kid always up for a dare, so I did it!  I think I ate about three of them.  Don’t worry, I didn’t eat them raw!  In Japan, they boil or fry them and even serve them in restaurants as tempura.  It is a delicacy to eat wasps and giant hornets there.  I bet you are wondering how they were?  Well, it wasn’t bad because they were marinated in some sweet sauce.  If I had eaten them raw I probably would have had to be rushed to the hospital because I am allergic to bees.  As you will learn in this article, you have to be careful with eating insects that have venom, such as bees.

Since you now know my dirty little secret, I am going to “wow you” with some insects you can eat too—if you dare!  I will also discuss the why we should eat them and how each one should be consumed.  You will be surprised by the nutritional value of some of these bugs.  The trend of eating bugs or insects has stretched from Latin America to Southeast Asia, and now the US.  Well, I wouldn’t say entomophagy (the practice of eating insects) is incredibly popular in America but it isn’t uncommon for people to eat grasshoppers, beetles and crickets.

Crickets are called the “New Chicken” in the US.  Not sure if I could eat them but there are people here and in other parts of the world that do.  Compared to foods such as pork, beef and chicken, crickets are said to have a much lower risk of passing diseases to us.  Crickets are not only eaten in America but also in Cambodia, Thailand and Africa.

If you are planning to become a vegetarian and looking for ways to get protein in your diet, this is it! Crickets are a remarkable source of protein, among other things.  They have 71 grams of protein per 100 gallons of water which is more than many types of meat you can consume; for example, beef is six grams and chicken is 19 grams.  Even my favorite fish, salmon, provides less protein than crickets.  You can actually buy organic cricket flour online on amazon here and at bug and cricket stores, which are mostly in NY, California and overseas.  Cricket flour is great because it provides a good source of calcium, iron, magnesium, fiber, B12, B6, Omega-3s, Omega-6s and amino acids, as well as protein.  Compared to steak, the amount of protein in cricket flour is a whopping three times more, which makes you think twice about eating unhealthy steak.  And four crickets have as much calcium as a cup of milk. And they beat out even some other edible insects on the nutritional chart.

As mentioned previously, you can get crickets in flour form; however, you can also get cricket protein powder and cricket oatmeal.  They are available online here (http://amzn.to/2kCIEIK) and at cricket flour stores.  I can imagine buying cricket flour being a great option for the squeamish because you are not reminded that you are actually eating crickets.  I suspect that most people would be squeamish seeing a cooked cricket in front of them as the main course.  This way, you can make your favorite morning meal such as pancakes, muffins or waffles with cricket flour.  I have seen cricket cookies and protein power bars too.  And it wouldn’t shock me if there were also cricket cakes.

You should try these #1 Best Seller Cricket Protein Bars by Exo on Amazon: Click Here http://amzn.to/2lIsdeR

Now, if you don’t mind seeing a cricket in its full form, you are in luck!  I have seen a variety of cricket snacks and meals.  Here are the top five ways to eat crickets:

Oh and let’s not forget when Wendy Williams recently had Brian Balthazar on as guest reporter to show us the Cricket Taco Trend!  He actually brought one on the show and ate it!! 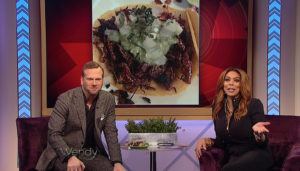 Grasshoppers are much like crickets but are more of a delicacy in Mexico.  They are called “chapulines” there and known to taste similar to shrimp or crawfish.  Grasshoppers must be fully cooked because of the nematodes, which are extremely long parasites that can cause havoc in your body.  These green hoppers are also a delicacy in Africa and Thailand.

As far as protein, grasshoppers provide a tad bit more than crickets, but are one in the same as far as everything else, such as being a great source of unsaturated fats which helps lowers the risk of heart disease.

Because grasshoppers are not too much different than crickets, aside from the fact you have to make sure they are cooked thoroughly, you can eat them some of the same ways as mentioned previously.  Mexicans think of grasshoppers as toppings for crunch like bacon bits.  If don’t trust cooking grasshoppers on your own, here are a couple options:

Beetles are the “New Bean”, kidney bean that is.  Specifically the Giant Water Beetle is nutritionally compared to the kidney bean.   Crickets can sometimes have somewhat of an unpleasant smell when they are cooked, but when you cook water beetles they are known to smell quite appetizing.  In the U.S. there is a large population of water beetles, although these are a delicacy in Thailand.  There are also a number of other edible types of beetles such as, the long-horned, june, and dung.  Water beetles are known to taste like watery scrambled eggs with a strong black liquorice taste and the head tastes like mushy crab meat with the same liquorice taste.

The reason beetles are the new bean is because the water beetle surpasses the kidney bean when it comes to protein.   On the insect nutritional chart the giant water beetle even surpasses crickets.  The giant water beetle also provides more calcium than most other insects. And if you are looking for a good source of iron, this is the insect to eat.  Water beetles even have more iron than most meats like steak and cod. Dung beetles are right behind water bugs in nutritional value.

Different species are eaten differently.  Water beetles are lightly broiled or fried.  The female ones are eaten and the male ones are used in Thai chili powder and other spices.  These insects are meaty so you can eat them similar to how you eat crawfish—pull the wing and legs and either suck or pull out the meat.  June beetles are commonly sautéed; moreover, from what people have said on YouTube, they taste nutty.  All beetles are supposed to be cooked live.  But be careful with water beetles because they are called “toe bitters” due to the fact that they are known to viciously bite toes, leaving quite a painful sting.  Also, cook them thoroughly because they have poison in them.  If you are like me, and could never touch a live beetle, you can buy them dehydrated by clicking here.

Mealworms are the “New Noodle”, just like macaroni. Technically mealworms are beetle larvae, which happen to be a delicacy in many areas, like the Netherlands, Asia, Africa, South America and of course the US.  There are many ways to consume these and they taste like a nutty shrimp—so I hear!

Mealworms have the perfect name, because you can literally make a meal out of these worms.  They can be boiled, roasted, sautéed and fried. Dry roasting mealworms are the best way to cook them because it is said that they are the most delicious that way.  Mealworms can be dipped in chocolate or just salted.  Some people eat them raw and alive because you get more nutrition out of them that way.  Others get the dehydrated mealworms and put them in their salad or eat them as a snack.

You can get dried mealworms here: Click here to get dried organic mealworms.

All in all, eating insects is healthiest for the environment and not as inhumane as killing animals for food.  And chances are if you ever had a pink or reddish colored Starbucks drink or cake before the outrage in 2012, you have already unintentionally consumed insects.  Actually, other companies also use cochineal extract aka “the red juice” in foods such as meats, jams, cheeses and even some alcoholic drinks to enhance the hues of such products.  If you are curious, check the labels of foods and drinks currently in your kitchen for cochineal extract to see if there are crushed up bugs in them.

Anyway, if you choose to add this to your diet, please make sure to wash them.  I know this may seem like common sense but after watching videos of people cooking and eating them, only a few would wash them beforehand.  Also, if you plan to eat insects that are poisonous such as bees, tarantulas or scorpions, make sure pull legs and stingers off, then cook them well. If you have already eaten insects or plan to, leave a comment and share your stories. I would love to know what you think about entomophagy becoming a way of life. We brought sushi to America so why not the practice of eating bugs too?