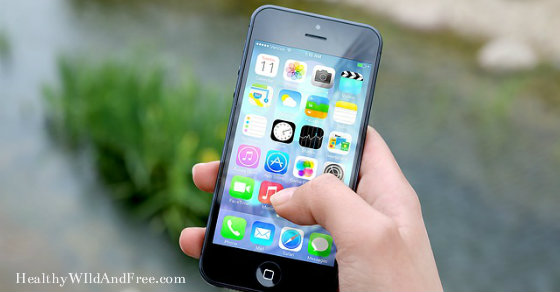 We don’t realize the full impact technology has on us and our health yet. What we do know is that they emit EMF’s (electro-magnetic frequencies) that weaken our bio-energetic (magnetic) field and can disrupt our hormones as well. To combat the EMF’s from electronics you can ground yourself by standing barefoot in the earth or using different magnet technologies. This will be discussed in further detail with healthy applications later on this blog but today i’m writing this to share with you how the light from your screens affect you.

Your phone, computer or tablet contain a range of light they emit that your eyes “ingest” (for lack of a better word) during the time looking at these screens. These light photons (light quantum particle) enter your eye and affect your pineal gland and it’s output of essential hormones that affect sleep, relaxation and energy levels. Specifically the amount of light you intake on a day to day basis effects your serotonin and melatonin production. Melatonin is needed for restful sleep and serotonin is needed to feel awake and alert. These hormones are both produced by your pineal gland.

So what’s the real problem here? Blue light from computer screens, tablets and phones disrupt your pineal glands natural circadian rhythm. Your circadian rhythm is your bodies internal biological clock that regulates asleep and awake cycles. This internal biological clock is thrown off with too much blue light from screens because it mimics daylight, blue skies and NOT nighttime, which confuses your body and throws it off.

The by-product of this blue light from screens is that your pineal gland will produce less melatonin (the relaxation/sleep hormone) and produce more serotonin causing you to be more alert and awake when you’re actually ready to go to sleep.

Experimental research suggests that an average person reading on a tablet for a couple hours before bed may find that their sleep is delayed by about an hour. Think about that for a minute. By reading your tablet, being on your phone or computer… or even watching tv before bed you can delay your sleep by an hour! Causing you to feel less rested in the morning of course.

Teenagers have all the same risks of light exposure, but they are systematically sleep-deprived because of how society works against their natural clocks,” said sleep researcher Steven Lockley of Harvard Medical School. “Asking a teenager to get up at 7 a.m. is like asking me to get up at 4 a.m.

In a 2014 poll, the National Sleep Foundation, an advocacy organization, polled parents, asking them to estimate their children’s sleep. More than half said their 15-to-17-year-olds routinely get seven hours or fewer hours of sleep. (The recommended amount for teens is 81 / 2 to 10 hours.) In addition, 68 percent of these teens were also said to keep an electronic device on all night — a television, computer, video game or something similar.

So what can you do about it? 3 Apps come in to save the day! I use each of these apps personally and they are free which is great. I use…

1. Flux: For my macbook. This app is great because it mimics the sun and does so automatically on your computer based on your timezone. I highly recommend it because it’s free and works very well! Your hormones and sleep will benefit from this app. I believe this is available for windows or mac users.

2. Bluelight Filter: For my kindle fire. I use this app on my kindle fire to remove the blue light at night. It’s a simple setting to turn on and it’s a nice free addition! This is on the google play store so it’s available for any tablet.

3. Twilight: For my android smartphone. I use this because if i’m on the phone later at night, texting or calling someone it allows the screen to filter the blue light and be a much dimmer red color. Another free app worth getting for your android! I believe that this is available for the Iphone as well.

The great thing about these apps is that they are all free and cover all of the screen bases (computer, tablet, phone) except for tv screens which i’ve heard companies are developing similar apps for now thankfully!

Another idea for anyone, that has been shown to be specifically beneficial for teenagers is to wear orange tint sunglasses before bed because these block blue light rays.

In a Swiss study published by the Journal Of Adolescent health they found that they slept better and felt less sleepy by wearing orange tint sunglasses before bed. So what can you do? get a pair of orange tint sunglasses and wear these leading up until your bedtime. This along with the apps mentioned above and a healthier home and bedroom lighting setup (click here to learn more about this) will help you fall asleep faster and keep your pineal gland and hormones harmonized.

Recommendations Beyond The Apps:

Orange Tint Sunglasses: To block blue light and to keep your hormones optimized later at night. Wear a few hours before bed up until bedtime.

Himalayan Salt Lamps: These salt lamps emit an orange light and are much dimmer than the regular white lightbulb counterparts. They also emit negative ions, purify the air and have many other health benfits!