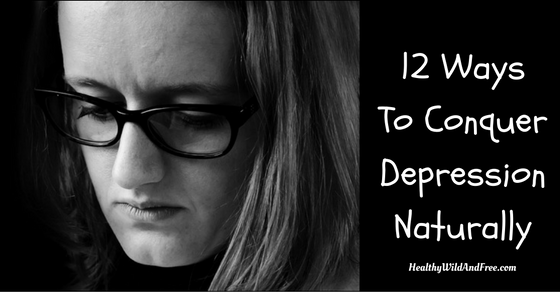 Have you ever had one of those days, weeks or months when it seems like happiness is an unreachable goal? Did you know depression affects more than 15 million American adults, or about 6.7 percent of the U.S. population age 18 and older in a given year? Depression accounts for more than $42 billion a year, almost one-third of the country’s $148 billion total mental health bill, according to “The Economic Burden of Anxiety Disorders,” a study commissioned by ADAA in 1999. With those stats it would leave you to believe that depression must be treatable only with the help of a doctor and pharmaceutical medications. Is there anything else out there to treat this mental epidemic? Below we will talk about the different types of depression and 12 natural ways to fight the blues.

What is this illness and is it all in your head? No, it is absolutely not.

Depression is a state of low mood and aversion to activity that can affect a person’s thoughts, behavior, feelings and sense of well-being.  It can be caused by a chemical imbalance or outside stressors. Knowing which type of depression that is affecting you is certainly key. Here are the 9 different types of depression commonly seen in America.

Major depressive disorder, also known as simply depression, is a mental disorder characterized by at least two weeks of low mood that is present across any situation. It lasts longer than two weeks or more.

Persistent depressive disorder is widely known as dysthymia. Sometimes called neurotic depression, dysthymic disorder, or chronic depression, it is a mood disorder consisting of the same cognitive and physical problems as in depression, with less severe but longer-lasting symptoms.

Someone with bipolar disorder, which used to be called “manic depression,” has mood episodes that range from extremes of high energy with an “up” mood to low “depressive” periods. Bipolar disorder mimics the same symptoms as Major depression but can also be accompanied by these symptoms:

Seasonal affective disorder is a period of major depression that most often happens during the winter months, when the days grow short and you get less and less sunlight.

Symptoms mimic major depression but is usually exclusive to winter months or times of the year where sun exposure is decreased.

People with psychotic depression have the symptoms of major depression along with “psychotic” symptoms, such as:

This type of depression has not been treated naturally and should be diagnosed and treated by a medical professional.

-Premenstrual Dysphoric Disorder (PMDD)
Women with PMDD have depression and other symptoms at the start of their period.Symptoms mimic major depression but also include:

Situational depression is when you’re having trouble managing a stressful event in your life, such as a death in your family, a divorce, or losing your job. It is better described as “Stress Response Syndrome.” Symptoms mimic major depression
-Atypical Depression
If you have atypical depression, a positive event can temporarily improve your mood. This is typically not the case with other types of depression and is not caused by a chemical imbalance.Other symptoms:

Now that we’ve covered the types of depression, below we will talk about natural treatments and which remedy might help the type of depression afflicting you.

We will break this up into 4 groups: Foods, Essential Oils, Exercise and Herbs.

3 Foods that will help you conquer depression symptoms:

Depression does not have to be the end of the road or take over your life. The great news is  now you have a choice to fight your depression with medication or to take the natural, side-effect free route. The resources are there, the information is available and at your disposal. You know your mental state better than anyone and now you can choose between taking the natural course for treatment or going with medication. Either way, I wish everyone the best of luck in their journey with depression. Just know you are not alone and you can get past it. Others have, and you can too.

Take life day by day and you will be ok!