11 Signs You May Be Cancerous Unknowingly 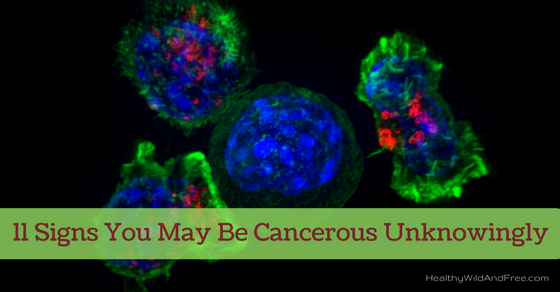 Did you know that in 2016, there will be an estimated 1,685,210 new cancer cases diagnosed and 595,690 cancer deaths in the US? Cancer has become so common in today’s society and is one of the most feared diseases of both young and old. 1 in 2 men and 1 in 3 women in America are diagnosed with some form of cancer in their lifetime. If cancer is caught early enough, proper care can be taken to avoid it from becoming life threatening. Below we will talk about the stages of cancer and the signs and symptoms that may help you catch cancer when it most receptive to treatment.

Precancerous, sometimes called a potentially premalignant condition, is a state of abnormal cells that is associated with an increased risk of cancer. If left untreated, these conditions may lead to cancer. The precancerous stage is usually either dysplasia or benign neoplasia. Sometimes the term “precancer” is used to describe cancer in a noninvasive form that has yet to progress to an aggressive, invasive stage. Not all precancerous abnormal cells will progress to invasive disease.

Cancer is an abnormal growth of cells which tend to proliferate in an uncontrolled way or, in some cases, spread (metastasize).Cancer is a group of more than 100 different and distinctive diseases. It can involve any tissue of the body and have many different forms in each body area. Most cancers are named for the type of cell or organ in which they start.

-The Four Stages of Cancer

11 Signs You May Be Cancerous

*These symptoms usually represent simple infections such as bronchitis or sinusitis.

2.) A change in bowel habits

*Most changes in bowel habits are related to your diet and fluid intake.

Anemia is a condition in which people have fewer than the expected number of red blood cells in their blood.

*Most breast lumps are noncancerous tumors such as fibroadenomas or cysts.

*Most men will suffer from harmless prostate enlargement as they age and will often have these urinary symptoms.

*Weight loss can also occur with change in diet or common sickness such as a cold.

*These are common symptoms of daily life, often related to food intake, muscle spasms or strains, but they also can be seen in ovarian cancer.

*Fatigue can also be associated with weight loss, obesity, stress and sleep disorders.

*Blood in the urine can be caused by urinary infection, kidney stones, or other causes.

*Lumps most frequently represent harmless conditions such as a benign cyst. A doctor should examine any new lump or a lump that won’t go away.

*Vaginal bleeding can also be caused by rough intercourse. Bleeding between periods can be associated with an STD or hormonal changes.

As with any sign or symptomatic condition, the more signs and symptoms you may have above may be a stronger indicator. There’s no need to panic if you have one or two signs, but if you hadn’t changed your diet or lifestyle habits in any way and some of these changes occur, you may want to get checked out.

–Carbohydrates and Sugar: Reduce or eliminate processed foods, sugar/fructose and grain-based foods from your diet.

–Protein and Fat: Consider reducing your protein levels to one gram per kilogram of lean body weight. Replace excess protein with high-quality fats like avocados and coconut oil.

–GMOs: Avoid genetically engineered foods as they are typically treated with herbicides such as Roundup (glyphosate), and likely to be carcinogenic.

–Animal-Based Omega-3 fats: Normalize your ratio of omega-3 to omega-6 fats by taking a high-quality krill oil and reducing your intake of processed vegetable oils.

–Exercise: Exercise lowers insulin levels, which creates a low sugar environment that discourages the growth and spread of cancer cells.

–Vitamin D: There is scientific evidence you can decrease your risk of cancer by more than half simply by optimizing your vitamin D levels with appropriate sun exposure. If you live in the north and cannot get much sunshine in the winter, Dr. Mercola has a great vitamin d supplement to use during that time, found here.

–Sleep: Sleep helps rejuvenate and replenish the body. Poor sleep can interfere with your melatonin production, which is associated with an increased risk of insulin resistance and weight gain, both of which contribute to increased chance of acquiring cancer.

–Exposure to Radiation: Limit your exposure from radiation produced by cell phones, cell towers, Wi-Fi modems and practically anything that requires a signal. Minimizing your exposure, or in some cases completely removing exposure from radiation-based medical scans, including dental x-rays, mammograms and CT scans is recommended. There are better ways to detect breast cancer (and cancer as a whole) than mammograms, which actually cause cancer as you can learn here:

We can’t always predict cancer but prevention is always the best method since cancer is running rapid and usually comes without warning. If you are experiencing more than one symptom above, contact a physician immediately with your symptoms or concerns. The quicker you detect cancer, the better chances it can be treated without invasive surgery.

Whether you choose to treat cancer naturally through diet changes or to use chemotherapy , this article will benefit you and hopefully prevent or help you on your road to a healthier body.

Here’s a great video to check out if you are looking for Natural Cancer Treatments: